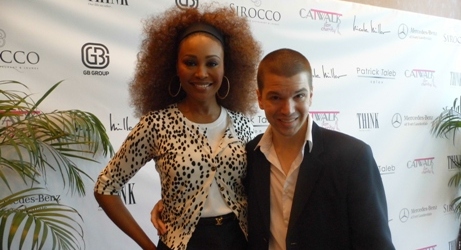 Currently one of the most talked about women in reality television, model/actress Cynthia Bailey garnered substantial attention during this past season’s Real Housewives of Atlanta. Ms. Bailey, who is the CEO of her own modeling school, The Bailey Agency, recently visited Miami for the yearly Catwalk for Charity Event.

This year’s festivities included fashion shows from designers Nicole Miller and Gustavo Cadile. The event raises money for Breakfast with Santa, which assists underprivileged kids in Miami’s Little Haiti, other parts of the city and the nation of Haiti as well.

Ms. Bailey was accompanied by her husband Peter Thomas, who is also featured on the popular Bravo show. She joined me on the red carpet to talk about a few topics.

Though she makes her home in Atlanta, Cynthia tells us what she likes about Miami:

“I love Miami. What is there not to like about Miami? It’s fun. It’s sun and, you know, it’s a good time. It’s also very fashion forward.”

There have been some questions about whether or not the model/actress will be on the next season of The Real Housewives of Atlanta. Cynthia says she plans on being on the Bravo show:

“I plan on it. Absolutely. The show has been an amazing platform and I’m excited about coming back.”

Ms. Bailey has shared many personal areas of her life on the show. On whether she had any regrets about being on reality television, she told us this:

“No. No regrets. Some disappointments, but no regrets.”

Regarding her school of fashion, The Bailey Agency, Cynthia shared this:

“Funny you should ask; I am in the middle of doing my Cynthia Bailey Agency model search today. So when I leave here, actually have to go and host my model search. It’s my third one and we’ve been finding amazing talent at The Bailey Agency.”

One Reply to “Model/Actress Cynthia Bailey Reveals Her Plans for Next Season’s Real Housewives of Atlanta; Confides She Has No Regrets About Bravo Show While at Miami’s Catwalk for Charity”