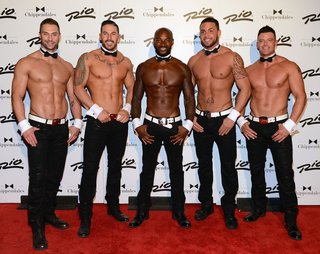 Labor Day weekend in Las Vegas is a busy time. When it comes to people seeking entertainment centering on the male physique, the latest installment of the Chippendales show at the Rio All-Suites Hotel & Casino fits the bill. Labor Day weekend 2017 was special, because it was the latest sendoff for celebrity model Tyson Beckford, who is part of the shirtless crew of men who make women scream nightly. Though Tyson might have joined Chippendales as a celebrity member, he easily fit into the crew.

Though Chippendales has been around much longer than the Magic Mike movies, starring actor Channing Tatum, an argument can be made that those films brought back interest in this type of performance. There are currently multiple shows featuring shirtless, buff men in the Entertainment Capital of the World.

As for the Chippendales show itself, men and women should take note that the show has ongoing nudity and teases. At certain points during the show, some of the audience’s women are given lap dances, slow dances and one woman was even asked to dress and dry off Tyson Beckford after he got out of a full nude, shower scene performance he did on stage.

From Bachelorette parties to a gals’ weekend out, Chippendales is a great stop for women who want to let loose and, perhaps, have some of their personal fantasies come true.

Photo credit for this piece goes to Denise Truscello.

You can find more information and purchase tickets to the Chippendales show at the Rio All-Suite Hotel & Casino clicking here.