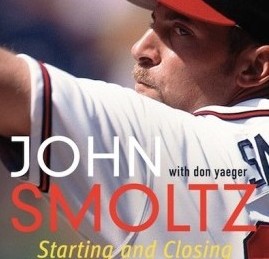 Overcoming adversity and continuing to move forward is the message in now retired, eight time MLB All Star John Smoltz’s new book Starting and Closing. The veteran baseball pitcher – who played for the Atlanta Braves, Boston Red Sox and St. Louis Cardinals – shares his biggest challenges fighting through injuries and talks about the ability to keep playing no matter what. Mr. Smoltz is one of the greatest big league pitchers of the last 20 years. In 1996, he earned baseball’s greatest honor, for a pitcher, when he received the Cy Young award.

Putting aside his baseball accomplishments, Mr. Smoltz has a bigger message in his book. It is about going for your dreams, dealing with tough situations and making the best of them. He also drives home the point that hard work is needed over a long period to truly become successful.

You can read the highlights or listen to John Smoltz’s entire CYInterview at below:

In the beginning of his book, Mr. Smoltz writes the following on page two, “Why not do what you love as long as you’re physically able. Why not take risks, as long as they’re calculated? Why not chase what some seem impossible? Why not believe in yourself? Why not dare to be great…even if it means being different.”

Besides the fact that people have fears, worry about what others think and are often cynical about achieving their desires, John Smoltz gives his thoughts on why it is so hard for people to go after their dreams:

“The overwhelming feeling from whether it’s the peer pressure or the times that we live in where information is at our hand and fingertips and you can spit out the statistical category of everything it seems. And sometimes public opinion just weighs too much on what each individual thinks about the security or significance of what they’re doing and where we live in a world that picks out the negative in everything; that points it out. It’s one thing to have fun and make fun of things; it’s another thing to deter somebody for your own self-satisfaction to say why they cannot do something.

And you know, I think because of all those things we tend to fall short of everything that we’re capable of doing including the work ethic it takes to be whatever it is that we are to be. You know, I have this belief that in this world, you know, being a great mother is not good enough for some people, that’s the hardest job in the world and to raise a family and do the things that you know make children, the opportunity to have their passions fulfilled. So yeah it’s all jumbled up into a mess that a lot of people find out years later. They go, ‘Man, I wish I would’ve done this. I wish I would’ve done this, this or that.’ I am hoping to shed some light on don’t wish, do.”

When tough times come calling, one of Smoltz’s most important messages is to make the best of a crappy situation. The Cy Young winner reflects:

“Self-worth seems to be something that’s tied with what we can give, offer or do. How much money, fame, you know, the statue of what our view is and I’m a big believer that you know apart from a faith in God, you may or may not agree with how everything goes on or as biblically written, I think we fall short in our insecurities and I think that’s the one thing that I’ve always had this rally mode you know like, ok, let’s dig out of this hole, let’s for no other ulterior motives than other than I want to be my best at all times whether it’s recreational or professionally, I want to beat you or I want to do what I can to be as good as I can and you know kind of the three Ls, live, laugh and learn. Those are things that I’ve always wanted to be part of my life. I’m not afraid to fail. I’m not afraid to make fun of myself. I’m not afraid to laugh and learn.”

With his Cy Young, 3000 strikeouts and World Series Championships among other accomplishments, Smoltz tells us what those things mean to him today:

“What they mean is that they’re moments in my life that are part of what has made me a professional baseball player. So in other words, you can point to those and go those were accomplishments, they don’t last forever, you can’t do it forever and they’re not what defines me. And so having said that, I realize that there’s a point in my life where that’s not gonna be who I am and to move on and become the man that God wants me to be beyond my playing days is probably just as important if not more important than what I’ve been able to do while I was playing for the Braves.”

Away from the baseball field, John is one of a handful athletes who are scratch golfers. He’s played over 30 rounds with Tiger Woods and is planning on making a run at the Champions Tour when he turns 50. Woods has stated Smoltz is the best golfer he’s ever seen not on the PGA Tour. John agrees that playing golf helped his career on the baseball field. Speaking of playing golf with Tiger, he said:

“Playing golf with Tiger Woods was the greatest treat in the world and yeah I came close, but I think that’s like anything, hand grenades you come close. It just doesn’t mean a whole lot until you’re able to take it to that next level. Everybody can have that one day, but not everybody can sustain a level and dominance that Tiger had done in his career and is trying, looking to get back to.”

Smoltz writes in his book regarding the personal events of Tiger Wood’s life in 2009, that led to Tiger’s divorce from his ex-wife Elin Nordegren, “Let me just say before I go any further that the events that unfolded with Tiger in November 2009 were as shocking and disappointing to me as they were to a lot of other people. We haven’t spoken since, but I am rooting for him to rally and do incredible things; I am confident he will one day regain his form as one of the best golfers in the world.”

Since he is an athlete who knows the importance of mental preparation, I asked John if he felt the things that happened off the golf course in Tiger Wood’s life impacted his performance on the course and ultimately his standing as America’s top golfer. [As a side note, Mr. Woods showed some of his old, winning magic this year:]

“One will never know. I think it’s dangerous to speculate what somebody else should or shouldn’t do or even what could lead to you know a temporary demise. I think the one thing that having been around him and seen the greatness that he has been able to put forth in the sport and how the sport kind of needs him, but nobody’s above the sport I think is an example of how quickly it can come and go. And by no means am I saying it’s gone, I just think that in life you choose to deal with things in a way where it may be counseling, advice given in one way and certainly walking through it and having to go through it will teach you lessons.”

There’s been discussion on whether or not John Smoltz will end up in the Baseball Hall of Fame. The retired MLB veteran gives his thoughts on ending up in Cooperstown:

“I don’t know. I’m asked that question a lot and it’s not up to me and the good news is I’m not confined or I’m certainly not obsessed by it. So if it happens it will be tremendous. But if it doesn’t it still will be tremendous because my career won’t be defined by entering the Hall of Fame or being part of some group. I will be honored, but like I said, life will go on well beyond those days.”

As a professional athlete of faith and someone who dealt with a lot of adversity during his playing days, Smoltz gives his thoughts on Tim Tebow and the things he’s had to overcome and deal with in the NFL:

“He defies you know the prototypical ways things go about and I’m a Tim Tebow fan. I root for him. I think the amount of attention and scrutiny that comes his way is mainly because of what he stands for and what he claims as his outward obedience to his faith and I think one thing that people you know feel like that is gonna cause a lot of discussions in areas that normally wouldn’t even come up and he’s, gonna be a lot of scrutiny and he’s handled it with all dignity and the way you could imagine is incredible.”

So what does John Smoltz want people to remember about him?

“I would like people to know that I made a difference in wherever I was, I gave it all, that I was a gamer or clutch or the fact that I just generally cared about people. My life will be viewed however somebody wants to view it, but if those things could be part of it you know that he generally cared about people and tried to make a difference in life that would be great. And as a pitcher, just the fact that I was clutch, you know that I was able to come up big when the time was needed the most and that’s all I could ever have wanted and for the most part was able to do that most of my career.”