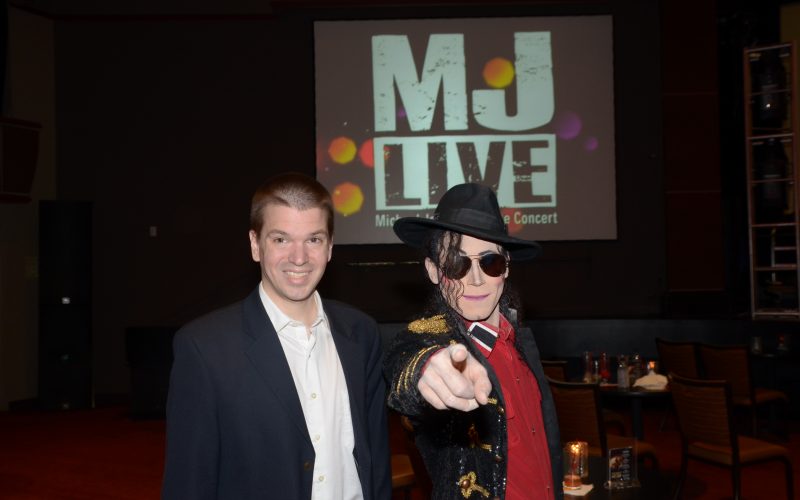 Michael Jackson once said, in a documentary film about his life, that one thing he loved about Las Vegas was the entertainment. This city was a place Michael spent personal time and even, at one point, had a home here during the last years of his life.

Michael Jackson lives on in Las Vegas, with shows that are focused around his music and his life. Recently, we attended one of those shows at the Stratosphere Hotel and Casino. MJ Live is a non-stop one hour tribute concert featuring many of Michael’s greatest hits, including Thriller, Billy Jean and Smooth Criminal. Santana Jackson and Jalles Franca are the two people who become the King of Pop when they are performing at the show. [See photo above at MJ Live with Santana Jackson as Michael Jackson.]

This personal/intimate performance with Michael Jackson’s music, as well as dancers and feel good atmosphere reminds us for a moment how much the Gloved One contributed to the world of music.

After Michael’s passing, we spoke to a variety of people who remembered him, including his sister La Toya Jackson [see here and here], Sony executives Cory Rooney and Chris Apostle [see here] and choreographer Travis Payne [see here] who worked with Michael right before his death. Each person had interesting things to say about Mr. Jackson. This Las Vegas show reminded me of those features we did after his passing.

MJ Live at the Stratosphere is a compelling show that presents Michael Jackson’s music and dance in all its dynamism. The show is definitely worth seeing while in Las Vegas. It runs nightly and starts at 7:00 PM.

You can find out more information and purchase tickets for MJ Live clicking here.

You can find MJ Live on Facebook at the link clicking here.