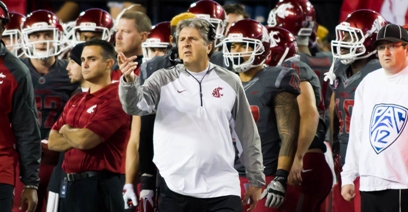 It has been three weeks since the death of college football coach, NY Times bestselling author and frequent CYInterview guest Mike Leach [see here]. Yesterday, Mike’s Mississippi State Bulldogs played in the Gasparilla Bowl against the University of Illinois’s Fighting Illini. The result was a 19-10 victory for the Bulldogs and a defensive touchdown scored on the last play of the game, sealing it.

The ESPN2 telecast featured tributes and memories to a man who gave so much to football and the people who knew him off the field, including we here at CYInterview.

In our continued series of revisiting every Mike Leach CYInterview, we look back to our second conversation, which took place in November of 2011. We talked about the a 2011 regular season game between Alabama and LSU, NFL teams losing games to draft then college quarterback Andrew Luck and more. Below, we have republished the article and full CYInterview, which you can listen to in its entirety.

This past August, Mike Leach, gave us more than 30 minutes, speaking about his NY Times Bestseller Swing Your Sword [see here]. With college football’s biggest game of the year taking place this weekend, pitting number 1 LSU vs. number 2 Alabama, we welcome back Coach Leach to breakdown the matchup, as well as catch up with him on some of the latest football news and other topics. Leach gives us every angle in the big game this weekend.

You can read or listen to the entire CYInterview below:

Mike starts by noting that at this time of the year, late in the college football season, things get particularly interesting because this is when upsets can happen. Coach believes the game between number 1 LSU and number 2 Alabama is one for the ages.

“This is kind of the most exciting time of the year because as teams get deep into conference and physical and emotional fatigues set in, then that’s where the upsets take place providing they’re playing against competitive competition…It will be a long time I think before there’s really a showdown of this impact, you know, this late with all the other extraneous circumstances around it. I mean, this is really one for the ages. Now, of course, the build up’s been like the movie Star Wars so it may not measure up quite to the build up.”

Focusing on the Alabama/LSU outcome, Coach Leach believes the Crimson Tide should win owing to home field advantage. Coach provides a more detailed preview of the game in the audio of this CYInterview.

“I lean toward Alabama. I think the differences between them, I think LSU ‘s deeper. I think the best running back’sAlabama, but LSU has more of them. I think LSU’s a more explosive team…Alabama’s more consistent. Alabama executes a little better, plays with more pads, more technique…Neither teams very good from playing from behind…My gut feeling is in a very closely tightly contested game, Alabama wins just through steadiness and consistency. “

In focusing on Coach Leach’s ongoing lawsuits, he noted there has been no word from the Texas Supreme Court yet on whether he can sue Texas Tech for monetary damages. Readers can gain more insight into this matter by reading and listening to our first CYInterview with Mike [see here].

“Nothing so far, I’ve kind of let the attorneys handle it otherwise you know, I’d be thinking about it all the time and wasting even more of my life than I have with it. But you know I mean, it’s a unique thing. In every other state you know, the things simple, in every other state, you get your day in court. In every other state, the government’s not allowed to violate your contract. But keep in mind, if I’m not allowed to my day in court and if I’m not to protect my contract, well, then it’s really not a contract and every coach that works for a Texas state institution is literally in an at will day by day contract and is not worth the paper it’s written on, which you know and that’s what’s so unique to this case. In any other state this thing would’ve been done in a couple of days.”

Finally, Coach Leach weighs in on the biggest chant this football season. That three word chant is “Suck For Luck” What it means is that NFL teams like the Miami Dolphins and Indianapolis Colts should lose all their games so they might pick upcoming NFL Draft prospect, quarterback Andrew Luck of Stanford. Many football scouts are high on this QB. Leach says he had not heard the chant and this was news to him. Additionally, he also gives us his analysis of Luck’s football abilities.

“I think there’s a certain kind of nobility to football that you don’t just go and play for next year. You don’t fall on your swords…If I was one of the worst teams in the NFL, I’d do everything I could to find a way to win just ‘cause you owe it to the guys that are on that team and just because you know, you go out there, you know, it’s like John Wooden use to say, ‘Make each day your masterpiece.’ Do the best you can. I’d just do it for the sake of the game. Then if you have to trade the first round draft pick to get Andrew Luck so be it…

The thing that’s unique about him is he’s a tall, rawboned strong guy and obviously looks like he can take hits and can. He runs well for a guy his size. And I mean, and then he’s not as accurate as people say he is. I mean he’s accurate, don’t get me wrong, he’s accurate, but you know there’s been better marksmen come down the pike and there’s better marksmen this year as far as accuracy…He’s captivating just from his leadership and enthusiasm qualities.”