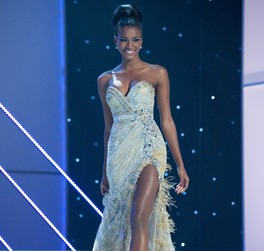 For many women, to be crowned Miss Universe is a dream achieved. It is more than that, however. Considering the worldwide responsibilities and duties that come with it, it is an honor, putting its holder in the spotlight. For new Miss Universe Leila Lopes, of the Portuguese speaking, African nation of Angola, wearing the crown is now a reality.

The 25-year-old beauty could not be more happy and appreciative. She feels she has a rare moment to spread awareness about her African nation and do some good. Leila is the first ever winner from her country.

Ms. Lopes tells CYInterview she is seeing a lot of growth in her country, in both education and health. She hopes to raise money to help improve conditions for children there, as well as fighting against HIV/Aids discrimination.

Miss Universe 2011’s reign did not get off to an easy start. An Argentine newspaper reported that Ms. Lopes had never lived in England. Her bio states she had been attending business school there. Additionally, allegations of falsified documents surfaced claiming Leila was actually Cuban and not Angolan.

In recent weeks, Ms. Lopes said she is 100 percent Angolan and that her documentation met all requirements to compete to become Miss Universe. The Miss Universe press office also denied that the current crown holder was Cuban and spoke Spanish.

In this CYInterview, Leila addresses the allegations that were made against her. That aside, she opens up about who she is and what her hopes are for the coming year. You can listen to or read our entire conversation below, telling you everything you might want to know about this year’s Miss Universe:

Listen to the CYInterview with Miss Universe 2011 Leila Lopes:

Chris Yandek: Leila, thank you so much for joining me. Did you ever believe this could happen to you?

CY: And what are some of the things we should know about Angola and the challenges the country faces?

LL: “Well, you should know that the country is growing fast. It’s growing a lot. I think they’re really changing in Angola, which is good for us ‘cause it’s, like, people’s life is improving. It’s getting better. Until about like 10 years ago, we didn’t even have like, universities and now we have more than 10. Yeah, things, education, health, things like that are really changing for the good.”

CY: What is the most rewarding part of becoming Miss Universe?

LL: “For me, like, it’s a dream come true. And I’m going to be able to show more of my country. This is like really, really, really a rarity to put my country on the map is great for me.”

CY: What do you want people to know about you?

LL: “That I’m just a normal girl who dreams, who fights for what I believe. Yeah. I never give up even when people tell me that I can’t do something. But if I believe I can, I really fight for it.”

CY: I read that you loved pageants since you were a little girl.

LL: “Yeah. I even use to even organize for the little kids.”

CY: By becoming Miss Universe, do you hope that you will inspire girls all across the world that anything is possible?

LL: “Yes and I think that I’m doing it already ‘cause like young girls are, been sending me messages on Facebook saying that, ‘I inspire them a lot.’ Yeah. This is good. They want me to give them advice, what I did, which is great, really great.”

CY: Tell me about some of the important lessons and principles you learned from your family?

LL: “Chris, that was one of the like, the biggest they have given to me to respect everybody no matter who. They say hi to everybody always. Yeah. One of the biggest was that. The one I’ll never forget, respect.” 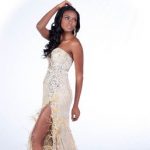 CY: HIV is something that impacts many countries across the world besides Angola of course. What are your goals in helping in the fight against HIV?

LL: “Well I really, in Angola, isn’t as big as in other countries, but even though I know that, I really think that I have to do something for my country because, before like it gets worse. Because people think that it doesn’t exist. People still thinking that it doesn’t exist. But besides fighting against HIV, I’m also fighting against HIV discrimination.”

CY: Can you tell me a little bit about that?

CY: Well, you noted you want to finish up your undergraduate degree in business. What are your business goals?

LL: “Well, I want to finish my under-graduation. I hope I can, I want to go back to my country. It’s developing. I want to be part of this development. I want to have my own business. I want to launch my cosmetics line. Yeah, like, I really want to do big things.”

CY: You basically want to be a job creator in your own country and give back to your people.

CY: Absolutely, glad to help you. Interesting enough, of course you cleared up of course your 100 percent Angolan, but there were some critics out there. Why do you think there were people out there trying to discredit you?

LL: “Oh my God, I don’t know. I really don’t. I know that every year a girl wins a competition, they’re always people talking something bad about it. But I don’t know why the people created stories like this. I don’t know.”

CY: Well I can just tell you, you checked out of course and everything was out there. This is the way the world works sadly today. That there’s always someone out there trying to rain on somebody’s parade. I just wonder you know, for those curious out there, how long have you lived in England and how long have you attended business school?

CY: Ok. Thank you very much. So there you go for that one. I know that you approve of your outer beauty and you wouldn’t change a thing, but how would you describe your inner beauty, the woman under the skin?

LL: “Well, I’m kind. I’m happy. I care about the others. I have charisma. Like, I’m telling you that, but also people also tell me that. So, I think, like, I have a very nice personality.”

CY: And through this competition you’re gonna have a chance to do some wonderful things. And over this year, I wonder, what do you most want to experience and do?

LL: “Well, one of the things that I’ve always wanted to do is like provide more, provide better conditions for children, especially African. Like, education, I hope I can raise funds to build more schools for African, Angolan children. That’s one of the things I really hope I can do this year.”

CY: Leila Lopes, thank you so much for joining me. In closing, you know, I was watching the beginning of your journey on this when you went to go get your passport [and Visa]. And I just remember when you were walking through, and you were going through the people, I remember this little girl just running up to you and hugging you. I know this year is going to be full of amazing opportunities for you and you know I just wonder in closing if you feel like, of course this is a beauty contest, but it’s more than that for you ‘cause I believe that this is your opportunity to you know give back to the world and make a difference for your country and of course across the world, do you feel the same thing?

LL: “Yes. I do. I really feel like I can do something about it.”

CY: It was a great pleasure to speak with you. I wish you the best. Just on a side note, when you arrived in the United States of America, I actually reside in Miami, Florida, so your first experience was in the back of my hometown. Thank you so much for coming to America, we wish you the best through your entire run of Miss Universe this year. It was great speaking with you. And I am exactly the same age as you and dreams really do come true if you continue to work at it as you very well know.

CY: Nice to meet you too Leila.

Photo credits for this piece go to Patrick Prather and the Miss Universe Organization.

12 Replies to “Miss Universe 2011 Leila Lopes: On the Controversies Surrounding Her, Who She is and Her Hopes for the Future”