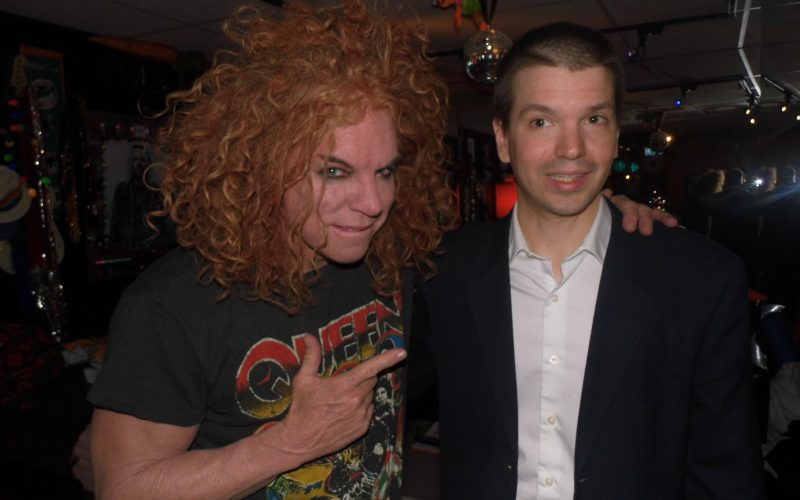 On Sunday evening December 2nd, a full house at the Atrium Theater at the Luxor Hotel and Casino in Las Vegas awaited comedian Carrot Top. Then, for a little more than an hour so, endless laughs came from the crowd as he showed some of his comedic props and got laughs from his stand-up.

Real name Scott Thompson, Carrot Top does 240 of these a year. So far he has done over 3000 performances in 13 years. With so many other shows on the Las Vegas Strip, that have come and gone since he began, this talented man continues to keep it real, with an outstanding and original comedic act. And audiences keep coming back for more. The night CYInterview was there, one audience member said they had seen the show 13 times.

The show ends with Carrot Top giving out some free drinks to the audience and getting acquainted with his crowd. If someone were looking for a story of staying power and show business success on the Las Vegas Strip, Carrot Top is the man to think of. If you want to continuously laugh, his is a must see show in Las Vegas.

After his show, we spoke with Carrot Top for a 30 plus minute CYInterview, in his dressing room. We discussed everything from career memories to life reflections. See our photo above.

On when he started using props in his comedy act, Carrot Top says it was early on in his career:

“Not too far after the very beginning. The first couple of times on stage it was just stand-up. And then I went to an audition for a comedy club and I did my jokes and the woman that booked the comedy club said, ‘You’re funny and your jokes are funny, but they are not gonna translate to a comedy club audience, as opposed to a college audience.’ So I went back to the drawing board and I kind of came up with some ideas that were by accident really, that were visual. One was a crime watch sign. It was my first joke with the prop.”

Carrot Top says that since his Las Vegas residency began, his show at the Luxor Hotel and Casino has changed and that he has evolved along with it:

“There’s more stand-up in the show than there was when I first started, because you don’t have that confidence that you do as you do this longer; you kind of get more confidence just to talk and have a quiet moment or have a story as opposed to a punch line. When you’re young, it’s like, I better get a laugh every second and now I feel like I can kind of slow down and have a little more fun.”

He has received accolades for his comedy from the likes of Jerry Seinfeld, Billy Crystal and even Jack Nicholson. He shares his Jack Nicholson story:

“I’m in the middle of the street talking to Jack Nicholson and I’m pinching myself like I can’t believe this is happening. … He did say, ‘I watched you on the Tonight Show with Jay Leno.’ And he really knew my act. He was like, ‘I like the thing you do with the thing.’ It was just really kind of a surreal moment where you’re like, oh my God, Jack Nicholson really just doesn’t know who I am, but he knows my act. Like, it was a genuine moment and he hugged me and, yeah it was a great moment. I never forget that.”

As far as professional goals, Carrot Top would love to get his show out to the masses via a streaming video service or other distribution possibility:

“I really want to get this thing that I’ve created out there to people that have never, you know what I mean? If they’ve never seen it they don’t know what the hell and then they see it they’re like wow this is kind of different than what, you know, it’s kind of, it’s really everything. It’s comedy but it’s also Broadway. I mean, this show is like a one man thing and there’s so much music and so many little intertwined stories.”

You can find out more information about Carrot Top’s show at the Luxor and purchase tickets clicking here.

You can find Carrot Top on Twitter clicking here.

You can find Carrot Top on Facebook clicking here.

One Reply to “Mighty Master of Comedy, Carrot Top: Props, Jokes, Free Drinks and More; Brilliant Comic Sits for 30+ Minute CYInterview at the Atrium Theater at the Luxor Hotel and Casino in Las Vegas”