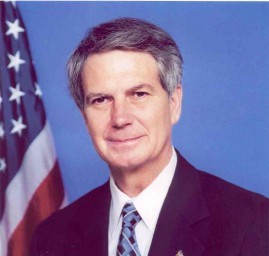 With the 2016 midterm elections just days away, there has been speculation that the Republicans might gain the majority in the United States Senate, as well as maintaining their majority in the U. S. House of Representatives.

For his perspective on the state of Congress and America in general, we welcome back to CYInterview Congressman Walter B. Jones, Jr. of North Carolina’s third district. See his past segments with us here and here.

Jay Bildstein and I discussed a variety of economic and social topics impacting Americans with Congressman Jones. This CYInterview segment went over 40 minutes and is a must listen.

“I do hope that our side in the house will start looking seriously at the debt of our nation. And let me mention this very quickly, when Bill Clinton left office, the debt of our nation was 5.6 trillion dollars. Today it is over 17.8 trillion dollars. And I can honestly say that we cannot continue to go down the road of spending money that we do not have and borrowing money from the foreign government such as China and other countries to pay the bills that we cannot pay because we’re spending more than we’re taking in.”

The veteran House of Representatives member says expect another national story involving whether or not Congress will raise the debt ceiling in March of 2015:

“In March of 2015, you’re gonna see the Congress again, it will be on national news that whether the Congress is gonna vote to raise the debt ceiling or not. Every time we raise the debt ceiling, seven out of eight times under President Bush, we’ve raised the debt ceiling six times out of five years under President Obama. And I’m gonna blame my own party, Republican Party and I’m a Republican that every time we raise the debt ceiling, all we’re saying is we’re gonna allow the president, whether it be Republican or Democrat, to borrow more money by selling our financial instruments to foreign countries so we can pay last year’s bills. But it does nothing to stop us from spending more money this year. To me, that is absolutely unfair to the American people and I am concerned about our children and our grandchildren and their future.”

The Congressman has shared his displeasure concerning a Washington culture pressuring members in the House and Senate to raise money for certain political organizations benefiting each party. He makes it clear that he does not partake in such fundraising activities.

“No question about it. I can tell you that four or five years ago, he’s a very good chairman, he’s leaving Congress named Buck McKeon from California, he’s not running for reelection, but Roscoe Bartlett from Maryland, a very smart man, both of them are smart, don’t get me wrong, but Roscoe was in line from seniority standpoint to be the chairman, but McKeon got the chairmanship because McKeon could raise the money. But Roscoe’s like myself, he’s not very good at raising money. The system up there is absolutely more and more about who can raise the money, who can raise the money, then they get the opportunity. And I don’t care because I want to just be up there to vote for the people of my district, to try to do what’s right. I’m not worried about being a chairman or a ranking member, I could care less quite frankly because I see the dishonesty in Washington right now.”

“If the Republican Party does not give a Rand Paul or a Ted Cruz an opportunity, an equal opportunity, a fair opportunity to get the nomination, then I would tell you there would be a third party movement. I will say this also, that Rand Paul would have the best chance of all of them I’ve seen named as possible candidates to defeat Hillary Clinton. He would have the best chance. His message is on target, his message is directed towards African Americans and I would tell you this that if we think we can get the good old boys and let them choose the candidate, then we will go down to defeat in 2016.”

Speaking about his friendship with Senator Rand Paul of Kentucky, who is one of the top candidates for President in 2016, he shared this:

“I think we share the same frustration that we are in, my analogy is I am not saying it’s Rand Paul’s analogy, but we are, I am living on a 12 hour clock. There’s no 1:00 AM. America’s living on a 12 hour clock. There’s no 1:00 AM. We’re in the 11th hour of a 12 hour clock. And as was just said just a moment ago, when we start hitting, we’ll hit 18 trillion dollars in debt in my opinion by probably March or April of 2015. When we reach 18 trillion dollars and then we’re heading then for 19 trillion, move over Greece, move over Spain, we’re right behind you. In fact, we’re gonna be in front of you. It just cannot continue to go this way. And nobody in Washington, they’re a few of us in the Republican Party and a few in the Democratic Party that really are concerned about this, but yet they’re not enough in either party that are concerned about it.”

Even if the Republicans take the majority in the US Senate and Senator Mitch McConnell becomes the Senate Majority Leader, Congressman Jones believes not much is going to change in Washington:

“I would say that if Senator McConnell remains the leader that or becomes the leader of the Senate, not much will change.”

With much dissatisfaction with his own party’s leadership in the House of Representatives, Congressman Jones tells us that he and some other members of Congress are trying to unseat Speaker of the House John Bohener:

“I am with a group in the House trying to unseat John Bohener as Speaker. I am not sure we can do it, but we’re talking about it. … I can’t because of names [elaborate], but we have been talking during this campaign season, meaning October and I just know that there’s a lot of frustration with his lack of leadership in Washington, but there again, you know, when you go out here, this is what’s killing good policy in Washington is money. And he can raise money so I don’t know if we got the votes to do it or not, but we’re trying.”