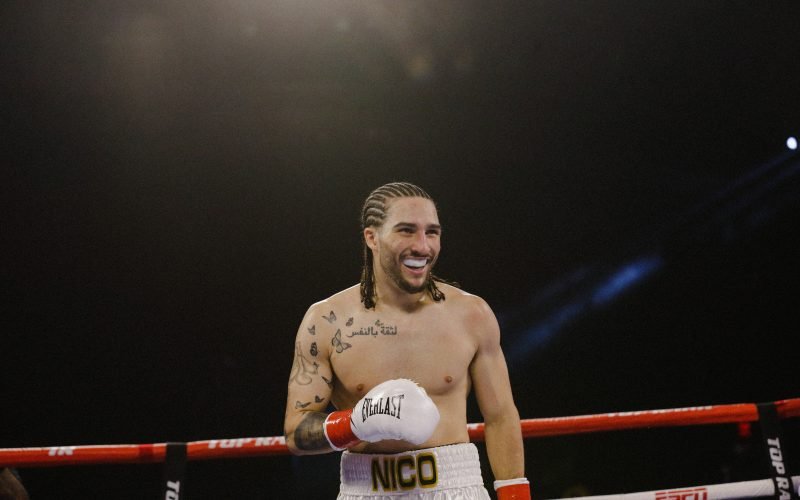 After the NFL Draft festivities conclude next Saturday, here in Las Vegas, the city’s sports fans will turn their eyes to the boxing ring at MGM Grand Garden Arena.

On the evening’s fight card will be Nico Ali Walsh, the grandson of The Greatest of All Time, Muhammad Ali. His mother is Muhammad Ali’s daughter, actress Rasheeda Ali.

With a record of 4-0, the middleweight will take on 7-1 Alejandro Ibarra.

The fifth fight of Nico’s career will be in front of a hometown crowd. Nico is also a student at the University of Nevada, Las Vegas. The pugilist is majoring in business entrepreneurship.

On why he wanted to be a boxer and follow in his grandfather, Muhammad Ali’s footsteps, he said this:

“It’s just something that I’ve always kind of had an interest for. Once I started boxing, I kind of just fell in love with it and I became in love with the idea of continuing my grandfather’s legacy.”

Without the blessing from The Greatest of All Time, Nico would never have taken up boxing as a career:

Being from Las Vegas, the fighter shares what it will be like to enter the squared circle at the MGM Grand Garden Arena on April 30th:

“For me personally, Vegas, for my generation, it’s huge. I’ve seen Mayweather. I’ve seen Pacquiao. All of the great fights that I’ve seen in my lifetime have been here. So, this is just my first step towards kinda creating my own legacy.”

Is it a burden for Nico carrying on the Ali family legacy?

“You know, it’s been a burden for me my whole life. Boxing has made it that so that it’s not a burden for me. … Since I turned pro, I’ve been able to kind of absorb it and be proud of it. So, boxing has helped me a ton. It’s definitely not a problem anymore.”

Jake and Logan Paul have gotten a lot of mainstream attention for their boxing contests. Nico does not believe the Paul brothers are really talking the sport of boxing seriously:

Featured columnist Jay Bildstein joins us for this CYInterview, where he talks with Nico about his training, among other topics.

You can listen to our CYInterview with Nico Ali Walsh below:

Listen to the entire Nico Ali Walsh CYInterview on YouTube:

You can find more information about Nico Ali Walsh by clicking here.