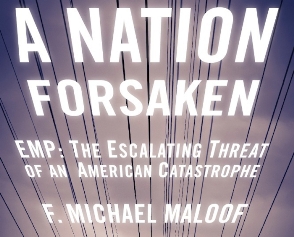 With America’s ever increasing dependence on technology, the nation is more vulnerable than ever to possible threats that, some argue, could set the United States back to the 19th century. In his new book titled A Nation Forsaken EMP: The Escalating Threat of an American Catastrophe, Michael Maloof explains how an electromagnetic pulse could negatively impact millions of Americans.

An electromagnetic pulse or EMP, can be created by the high altitude detonation of a nuclear device or solar flares, among other things. It possesses the ability, unless the appropriate measures are taken, to render useless all kinds of technology relying on electricity. That includes just about everything.

Mr. Maloof claims over 30 years of federal service. He states he has worked for the U.S. Defense Department, trained border guards and special forces. His press release for his book states, “While with the Department of Defense, Maloof was director of technology security operations as head of a 10 – person team involved in halting the diversion of militarily critical technologies to countries of national security and proliferation concern and those in sponsoring terrorism. His office was the liaison to the intelligence and enforcement community with the Office of the Secretary of Defense in halting transfers and using cases that developed from that as early warnings to decision-makers of potential policy issues.”

To gain the best understanding of what an electromagnetic pulse is and how America’s security and infrastructure are vulnerable to it, listen to the complete discussion with Mr. Maloof. CYInterview Editor in Chief Chris Yandek joins us for this important conversation. As always, you can read select highlights of our talk, below:

To understand why America’s infrastructure is more vulnerable than ever, Michael Maloof explains what an electromagnetic pulse is and how it could impact all of us:

“An EMP or electromagnetic pulse is a high intense, highly intense burst of electromagnetic energy, such as microwaves, gamma rays, infrared radiation and it can be, it comes at such an accelerated speed. For example the solar flares, it could be, you have tons and tons, hundreds and thousands of tons of highly charged particles that are coming into our atmosphere at any given point under those conditions and they would, and they’re highly charged and they affect the magnetic pole and consequently this amplifies and creates such an overwhelming charge that it overcomes and absolutely can fry any unprotected or unhardened electronics that we might have such as our grid.

And in turn this affects, and because we’re such a technology based society, especially the United States as you pointed out, all of our very critical infrastructures would be affected. We’re talking about eight tenths of infrastructures that all depend upon electricity, electronic components or automated control systems. All of these could be greatly affected if they’re not protected with, by hardened electronics embedded in them. And this has been one of the big issues with the utilities.

It’s a question of cost that we’re talking a few billion dollars to fix it over a period of time. However, the alternative is even far outstanding and unbelievable. And coming from NASA, they’re saying that if we have a solar flare, a direct hit from a solar flare this year or next which represent the most intense period of the sun’s emerging 11 year cycle, it could cost us, again this has to be a direct hit, it could cost us upwards of two trillion dollars the first year, take four to ten years to recover if ever and affect 160 million lives, meaning death and starvation to more than half of the U.S. population.”

Though it might seem like something out of a farfetched movie, it is possible that Americans could one day experience a life where they are unable to utilize the electronic devices we have become so dependent on, owing to an electromagnetic pulse. Michael explains how we can prepare for such a catastrophic and massively life changing event:

“Given the reliance that we have on electronics today, you know everything from the ATM to pumping the gas to even all the automated systems that run everything that, like our oil and gas pipelines across the nation. We take all of these things for granted and we need to be thinking of what, we need to be doing a ‘what if’ scenario; what if this happens? What will I do? What will be my response? And this is why I think people at the local level need to get with their local emergency responders and say, ‘Ok, what if this happens. What will be our response this? How do we react? Do we have predetermined locations where people can go to get food, to get water stored up and medications?’

So that in an event, assuming that there is no communications, nowhere to report to and we can deal with it accordingly. … We have the ability and capability to fix our electrical grid system and all the electronic components that we now rely on so extensively. I think we have to have an alternative and people need to be able to know how to survive should one of these events occur and we’re not doing it and simply because we’re lulled into complacency. We just don’t think it’s gonna happen and eventually something is, big is gonna happen.”

You can find more information about A Nation Forsaken: EMP: The Escalating Threat of an American Catastrophe and purchase a copy of the book here