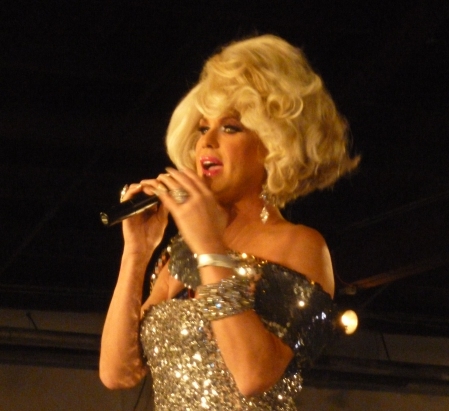 As red carpet festivities were ending at the 18th Annual Intercontinental Miami Make-A-Wish Ball, one last celebrity was making their entrance. Miami’s drag queen numero uno, Elaine Lancaster – whose profile has been rising thanks to The Real Housewives of Miami – walked the red carpet in a formfitting black dress and signature big blonde hair. I had the opportunity to interview Ms. Lancaster that evening.

Only a few weeks prior, we narrowly missed seeing Elaine’s alter ego when we attended South Beach nightclub Score and met with singer Kimberley Locke [see here]. That night, James Davis, the man who transforms into Elaine Lancaster, was there sans drag. For more than a decade James, as Elaine Lancaster, has entertained eager crowds in Miami and around the world.

Fast forward a couple of weeks and I would have the opportunity to see Elaine in action as the hostess of the annual White Party, held at SOHO Studios. The divine Ms. Lancaster has hosted the gathering for 14 years. The event occurs during White Party Week, which is an HIV/AIDS fundraiser.

Two encounters in a span of three weeks have yielded two in person CYInterviews with Elaine Lancaster. You can listen to them, as well as read the highlights, below:

Listen to the Elaine Lancaster CYInterviews:

As Ms. Lancaster gets on stage for the fashion show portion of the White Party Reset festivities, you witness an entertaining persona full of humor and purpose. Elaine is well able to hold a room’s attention. She admits there’s a rush from the process:

“I get a rush before I get to the event. Drag is a very intoxicating drug. It’s a high. I’ve been doing this for 15 years professionally.”

Owing to The Real Housewives of Miami, Elaine Lancaster’s fame has grown. She is a good friend of cast member Lea Back. At the Make-A-Wish Gala, Elaine spoke about her friendship with Lea.

Ms. Black, by the way, was front and center watching Elaine entertain the crowd during the White Party Reset’s fashion show. Lea Black is the wife of prominent Miami attorney Roy Black, who has been featured on CYInterview. You can find our past CYInterviews with Roy [here] and [here].

“I have been friends with Lea for about I think, 13, 14 years. We met because of my good friend Dennis Rodman and Carmen Electra were out on the town one night at The Forge Restaurant and they got into a little scuffle back at the hotel and got arrested and I called Roy and they got him out of jail.”

After finishing her White Party hosting duties, Elaine continued to speak about being friends with Lea and how their passion for charity and collaboration has made their friendship strong:

“I was born out of charity and I will continue to do charity work as long as there’s breathe in my body. That is what has actually led Lea Black and I who is this, the matriarch, the star of the show to become friends as we have a mutual passion for giving back. We live a very extravagant life, independently on our own, but we also give back and we are unapologetic about spending the money we spend, going the places we go and doing what we do because we do so much good.”

White Party Week is known as “The Crown Jewel” of HIV/AIDS fundraisers. It claims to be the largest and oldest benefit of its kind in the world. Elaine talked about how the proceeds are utilized and the manner in which the event has changed over the course of her 14 years of hosting. This year, the new venue was SOHO Studios:

“80 cents out of every dollar that is generated throughout White Party week goes to client services and it’s just something that I thought many years ago would already be cured and something else would be on the horizon, but unfortunately it’s still here. … The fees for the rental uses of Vizcaya were astronomical and the board decided and I concur that it’s much better served to take that money and put it into client services then to rent out or lease a space for an 18 hour period to, I mean it was $75,000 a night.”

In recent weeks, Elaine garnered attention for a confrontation with Marysol Patton during an event at fashion designer Lisa Pliner’s house that aired on an episode of The Real Housewives of Miami. It’s been shown on The Real Housewives of Miami, reportedly the two have had ongoing issues. During our CYInterview at the White Party, Elaine spoke about how this was presented on the Bravo show:

“You have to sort of look at the totality of the whole entire season. I know that I’ve come across a little harsh last episode, but it was something that was all bottled up that came to ahead at a specific moment and time. Unfortunately it was at an event where I was working, but my explosion was a result of trying to communicate with someone who had been throwing her rocks and hiding hands so to speak for many occasions and she wouldn’t address the situation time after time after time. So it was the only time that it was feasible to do so and unfortunately it had to happen at an event I was working. But it was a secluded incident. Not a lot of people saw it.”

Elaine appearing on The Real Housewives of Miami, in addition to RuPaul’s Drag Race, have brought more mainstream attention to the world of drag. When I asked Elaine, at the Make-A-Wish Ball, if she was representing the drag queens of the world with her growing celebrity on Bravo, she had this to say:

“I don’t know if I’m representing the drag queens of the world. I’m just trying to represent myself. But it’s a great honor and hopefully, you know it’s amazing the platform that Bravo has and I’ve been living in this town for 14 years, I travel all over the world. So it’s just, it’s nice to have this opportunity.”

You can find more information about White Party Week 2012 here.

5 Replies to “Miami’s Queen of Drag, Elaine Lancaster: A Double CYInterview with One of the Compelling Personalities of The Real Housewives of Miami”