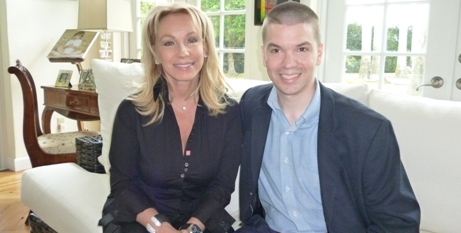 One of Miami’s most important annual events is just days away.

Back in January we spoke with Lea Black of The Real Housewives of Miami [see here] about her life and current projects. Her yearly charity event, the Black Gala, is being held this year on April 13th, at the world renowned Fontainebleau Hotel on Miami Beach.

The Black Gala is one Miami’s biggest social gatherings of the year. It is the event that everyone wants to be seen at. Yearly, the city’s rich and famous turn out not just for the fun but in order to support a worthy cause.

Lea, alongside her husband – prominent attorney Roy Black – does considerable work to insure that the evening is a success. Proceeds from the Black Gala benefit the Consequences Foundation. The organization provides educational opportunities to at risk youth. The Gala also benefits Teach for America, Breakthrough Miami, Big Dream for Kids and other worthy causes.

We spoke with Lea at her home in Coral Gables about this year’s event, which will see Flor Rida as its headline, musical performer. She also reflected on a host of Gala memories. In addition to hearing about the Black Gala, we got the scoop on Lea’s new handbags, as well as the latest on her skincare line and an update on her soon to be released novel about Miami.

Rapper and songwriter Flo Rida is the main musical guest for this year’s Black Gala. He grew up in South Florida and this will serve as a homecoming performance of sorts. In 2008, his song Low spent 10 weeks at number one on the Billboard Hot 100 chart. In 2009, his song Right Round became the fastest digital single to reach one million downloads. Rida has toured all across the world in recent years and has reportedly sold 60 million singles. Lea gives her thoughts on him:

“He’s amazing. He’s had a lot of big hits recently. He’s been on the charts a lot in the last few years and he’s a very generous guy that really cares about kids that are struggling and he’s doing things in his own world with charities to help kids that people don’t even know about. So he’s really the perfect fit for us this year and we have some other surprise talent that will probably show up.”

Everyone has performed at the Black Gala from Tony Bennett to Queen Latifah. Lea muses on some of her favorite Black Gala memories:

“I think the year we had Patti LaBelle and Lil Wayne was huge. That was a really big year. I mean they were both just iconic legends and then you know Barry Gibb played here in the house when we use to have the charity here. So I would say those are some of the more memorable ones. Natalie Cole is also amazing, but, and you know I love Dionne [Warwick]. I love them all. They, most all of these people have donated their time and their talent and not been paid for it. There have been a couple of times we’ve had to pay over the years, but usually they donate it.”

With a new line of clutch handbags, Lea the entrepreneur shares with us why she is now in the bag business:

“What happened is I carry basic bags in the daytime, I’m not a trendy kind of person. You can see I’m pretty basic and I just every night after five, I find myself kind of with the bland handbag or trendy bag and I don’t like the trendy bag so I decided I’m just gonna start making them or having them made for myself and I started having the Swarovski crystal clutches made and then everybody started asking me about them and people started wanting them. So I started making them for friends and then finally I said, ‘You know why don’t I just put them on my World of Lea Black website and see who’s interested.’ And amazingly enough people like them and then I decided to bring in a company that can really make bags in mass production and expand the line and that’s what we did.”

Sharing the latest on her Sudden Youth Skin Care line, Lea has expanded the product line now to include moisturizes for your skin:

“I’ve been in the skin care business since the 80s with Sudden Youth and Sudden Youth really does make you suddenly look more youthful. But I decided to expand that to include moisturizing your skin more because people in most parts of the world, their skin is dryer today than it ever has been because of the environment. So we developed with top chemists around the world a skin care line that’s designed to increase moisturization in your skin for and within two days up to 440 percent and we’ve got the clinical studies to back that up. So now you can lift, tone, firm your skin and tighten it and get smaller pores with Sudden Youth and you can moisturize it properly with the Lea Black beauty line.”

Back in January Lea told us about her upcoming Novel based on Miami. She gave us an update:

“It’s kind of scandalous, Miami socialite, Jackie Collins, Truman Capotesque type novel and I’ve been hesitating to release it because I think everyone’s gonna try to identify who the characters are and they may or may not figure it out, but for the most part their composites of various characters in Miami. They’re not really specific people. Even though maybe that specific person was in my mind when I wrote it, but I actually wrote this three or four years ago and everyone that I’ve given it to is like, ‘Oh my God, you’ve just gotta publish it.’ So I said, ‘Alright I’m gonna finally do it now and hold my breath and hope I don’t get run out of town.’”

The Black Gala is on April 13th at the Fontainebleau Hotel on Miami Beach. You can find purchase tickets and find more information about the Consequences Foundation at www.theblacksannualgala.com .

You can find Lea Black’s handbags, skin care products and more at her official website www.theworldofleablack.com.

4 Replies to “Miami Powerhouse Entrepreneur Lea Black Talks the Upcoming Black Gala; Shares News on Her Handbags and Skincare Line; Gives Update on Her Soon to be Published Novel”