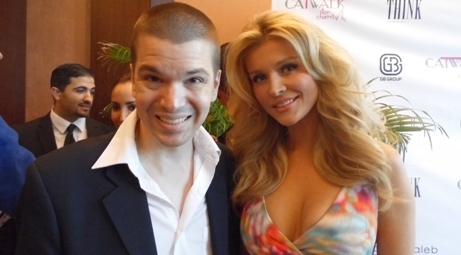 It is always a delight to see Joanna Krupa out and about in Miami. The blonde beauty is always full of energy. The internationally known supermodel, philanthropist and Real Housewives of Miami Star recently attended the Catwalk for Charity event here. Proceeds from the event went to the Breakfast with Santa organization to help children who live in Miami’s Little Haiti, other parts of the city and the country of Haiti as well.

You might recall that we saw Ms. Krupa last year at the “Social Mayor of Miami,” Lea Black’s annual star studded Gala [see here] as well at Lea’s home when country music star John Rich was there for a soiree [see here].

A lot has happened in Joanna’s life since we last saw her. You can read the highlights and listen to the entire CYInterview below:

Joanna made Maxim’s 2014 list of the hottest 100 women in the world. The former Playboy model has been on the list numerous times. Speaking about the honor, she told us this:

“Maxim has been very supportive of my career. I think the first was in 2003 or 2004. So, I love Maxim. You know, it’s such an honor to be nominated almost every year for the last what? 10 years. So it’s wonderful.”

“Married life is wonderful. Not much changed because, you know, we’ve been together for so many years before we actually got married. But it’s wonderful. Now we have to make decisions together. So that’s the only difference.”

There are still conflicting reports on whether The Real Housewives of Miami will be renewed for another season on Bravo TV. Joanna said she had no idea if the show would return. Speaking about whether she would like to participate in the show, for another season, if it returned, the former Dancing with the Stars contestant said this:

“You know what? Honestly I don’t know. I’m not really into that. You know, I’m kind of moved on with my life from that. But if it comes back, you know, it’s always up for discussion, but right now I’m not even, you know, I’m not in that world anymore.”