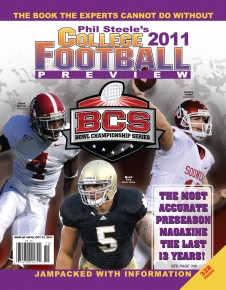 When the months of June and July come around, college football fans, across the nation, know the next season is within reach. During that time period, many of the most dedicated fans go to their newsstands to pick up the yearly college football preview magazine written by Phil Steele.

For close to three decades, Phil has been working in the sports information business. He started with a newsletter. His inspiration to develop it into a magazine, with its deep coverage of everything college football, took place owing to his search for more comprehensive information about the game.

“I started a football newsletter almost 30 years ago back in 1982. What I would do is compile the information from other preseason magazines or I should say preseason magazines. The problem for me was they never had enough information in there. So I started to compile the information myself, contacting the schools, etc about 20 years ago, put it into a scorebook form. Then 17 years ago we put out the very first magazine. It was on black and white newsprint. Quite a bit different than it looks like today.

It won a lot of popularity. A lot of folks love the amount of information that was crammed on the pages and each year we try to make it a little bit bigger, a little bit better…We’re already starting to work on next year. I do have a staff of about 20 people that work for me. We got nothing but football 365 days a year. They get all those stats on the right hand page and each page is proofed six times.”

When it comes to surprise teams this year, Mr. Steele has the Virginia Tech Hokies at the top of his list because of their favorable schedule. He believes they will be 12-0 going into the ACC Championship game.

“What I really like about Virginia Tech this year is the schedule. You look at their six road games, none of the teams had a winning record last year. In fact, the toughest road test is at Georgia Tech. Georgia Tech runs the option, if you got an extra week to prepare for them that’s a really good thing. Virginia Tech’s got an extra week to prepare for them. Their toughest three games at home are Clemson, Miami of Florida and North Carolina. None of those teams will be ranked in the top 20 at the start of the year. They all have to come to Blacksburg. Add it all up, I’ve got Virginia Tech a touchdown favorite in all of their games this year. I think their 12-0 when they head to the ACC Title Game.”

There has been talk that this year might see the Fighting Irish of Notre Dame be able to run the table and go 12-0. With an improved defense that has added some athleticism and an offense returning nine starters, Phil believes, at the very least, Notre Dame will end up in a BCS game.

“That have been the most underachieving team in college football probably in the last 20 years. Every year they seem to finish lower than where folks rank them…It’s the second year for Brian Kelly. We see a lot of second year head coaches have success…What happens is the coach now knows the players inside and out. The players know his schemes and you see a much improved team…When you look at the schedule, there’s no cream puffs. There’s no slam dunks anywhere on the schedule.

All these teams are bowl caliber, but there’s also no top five teams on the schedule and they get the toughest teams at home. You look at the road slate, Michigan, Pittsburgh, Purdue, Wake Forest and Stanford all fall into the winnable category. I think if it all breaks right for Notre Dame this year, they could even run the table, but I’m not gonna go that far. There’s been too many Notre Dame disappointments recently, but I do think they actually get to a BCS Bowl Game and Brian Kelly is a pretty good head coach.”

There’s a lot of buzz around the Wisconsin Badgers this year with the addition of Quarterback Russell Wilson who transferred from NC State. Wilson has added a major weapon to the Wisconsin offense that will give fits to defenses they face. With Wisconsin being the favorite to win the Big Ten, Mr. Steele believes two games against Michigan State and Ohio State will decide whether this team is a national title contender.

“They’re gonna be the preseason favorites to win the Big Ten when the media comes out. I think the 12 guys that did not like the Russell Wilson decision, that would be the 12 defensive coordinators that have to play Wisconsin…Now that Russell Wilson’s there, if he adapts quickly to the offense, he’s the led ACC in touchdown passes each of the last three years. He’s proven to be an accurate quarterback and very dangerous.

If he drops back to pass and everything breaks down, he can take off and run adding yet another dimension to the Wisconsin offense. So they’re going to be tough to stop this year if you’re a defensive coordinator. Pick your poison. You’re gonna have to guess right on a lot of plays….How they fair against Michigan State and Ohio State in back to back weeks in October will really determine whether or not this team is a national title contender.”

When it comes to the defending national champion Auburn Tigers, don’t expect them to repeat. Auburn only has six returning starters from last year’s team. Expect a falloff from the Tigers. They might be fortunate to become bowl eligible with the possibility of just a five to seven win season.

“The experience level has dropped off dramatically. They’re number 120 in the NCAA. They only have six returning starters this year. They lose 31 lettermen. Some teams don’t lose 31 lettermen in two years…This year all the tough games on the road. They’re gonna be an underdog at Clemson, at South Carolina, at Arkansas, at LSU and at Georgia. They’re also gonna be an underdog at home against Alabama and possibly at home against Florida. So I think five to seven [wins] is a perfect prediction for this team.”

When it comes to teams from non-BCS conferences, Phil thinks Boise State could be a national title contender. He also says that college football fans should pay attention to the Southern Miss Golden Eagles as they could be a surprising team coming out of the blue.

“If they [Boise State] get past Georgia in Atlanta in that first game of the season, they all of sudden elevate to national title contenders role because Georgia could very well win the SEC East. So I’m gonna go with Boise. If you’re looking for someone coming out of the blue, I’m gonna go with Southern Miss out of Conference USA. I think they’ve got the talent and the schedule to possibly run the table this year and Coach Fedora is doing a fine job.”

Though he doesn’t consider himself an expert on conference realignment, he does believe we probably will see 16 team super-conferences one day.

“I think probably in the long run you are looking for 16 team super conferences, but when, where and how, I’m not really sure. As far as, I’m definitely not an expert as predicting conference realignment.”

“A lot of coaches on the hot seat. I’m gonna to have to start with Mark Richt at Georgia…This year, he is firmly on the hot seat. Probably number one on my list is gonna be, go out to UCLA and Rick Neuheisel…I think that he needs to get to a bowl or he’ll be gone…You look at a Mike Stoops from Arizona. I think that he’s gonna have to have himself a winning year. Dennis Erickson, I believe he’ll have that winning year, but I think he’s gotta have it at Arizona State as well.”

In October, the Florida Gators will play Alabama, at LSU and at Auburn in consecutive weeks. Mr. Steele agreed with me that it’s probably the hardest three game stretch any team has on their schedule in college football this year.

“I think everybody is gonna have these two teams one, two at the start the year. I do have them playing in the national title game. When I broke it down, I had to go with the better defense and the SEC pedigree. I went with Alabama to win the national title.”

5 Replies to “Man of Steel on All Things College Football, Phil Steele, Gives Season Preview, Picks the Tide to Take it All, More”