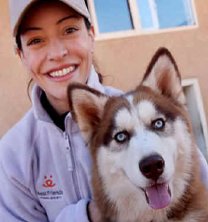 Whether it’s as Charlie Sheen’s first fiancé on his show, Two and a Half Men, or on the cover of Maxim, you’ve seen Emmanuelle Vaugier somewhere. Look at comments on the Internet and you’ll see many people calling her stunning or the best looking woman they’ve ever seen. Some say she’s one of the best looking actresses working today.

Emmanuelle let CYInterview know she is currently in a relationship, for all the guys out there wondering. The Canadian native went to an all-girls school and grew up in a French speaking home. Ironically, today, her best friend is male.

Wrapping up a recent episode of Hawaii Five-0, Ms. Vaugier came by to discuss an upcoming event for Best Friends Animal Society. The first annual event took place last year at her home. This year’s event will take place on January 22nd and will be at the home of one of the managing partners of Creative Arts Agency, David O’Connor. It will have celebrity guests including Alyssa Milano. Vaugier explains why she was interested in the Best Friends Animal Society.

“Originally I was looking for a charity to support and be a part of. I’m passionate about animals and their welfare. I did some research and Best Friends kept coming up. What I loved about them is they sort of blanket all the smaller organizations as well and they’re just not working for them. They help out all the smaller organizations that maybe don’t have the resources and don’t have the ability to do what they need to do.”

Through all of her acting projects in movies and in TV shows, the Two and a Half men actress says she likes the idea of not knowing what’s next. When it comes to all of her talents, Vaugier says being a Bond girl would be dream role material, with the ability to shoot a gun and look hot doing it. Away from the screen, the actress and magazine centerfold says she is a very goofy person who has no problem making an ass of herself.

“I love the idea that I don’t know what’s next. There’s something about the lack of security in this business that somewhat drives me. You just don’t know what’s gonna happen next…That’s sort of like dream role material…It encompasses all of the things that I like to do. There’s always a little tongue and cheek sort of humor and comedy in the Bond movies. I love the action and there’s nothing better than being dressed fabulously, looking hot and shooting a gun… I have no problem with making an ass of myself and being goofy and behaving like an idiot. Not I’m an idiot. That’s not it. I like to have a good time and not care what people think and I try to do that in my daily life.”

Looking across the Internet, you find pages of comments of people saying how attractive, sexy, hot and beautiful Emmanuelle is. Her spreads in Maxim and Stuff magazines have shown off her beauty in a way that would leave most men – and probably many women – complementing her looks. She finds it very flattering and believes it’s important for her to make the extra effort to show who she is on the inside. It doesn’t bother her one bit that people might label her as a hot woman.

“It’s really flattering. I love that people think that. I’m grateful for it. I certainly don’t wake up every morning thinking that myself. I’m pleased with the person that I am and I’m happy that people appreciate what’s being put out there. To me, it’s more important to sort of have that beauty and strength on the inside, but in this business it’s in inevitable you know. It’s an exterior thing as well…I think it’s up to me to make that extra effort to be, to really show and shine through who I am on the inside maybe more so than somebody else might have to just because there’s that sort of exterior that they think is one thing, but isn’t necessarily that.”

Finally, no one will soon forget her role as Charlie Sheen’s fiancé on the hit CBS show Two and a Half Men. Ms. Vaugier misses the show and the role of Mia. Aside from that, she has nothing but good things to say about Charlie Sheen regardless of what recent media reports have published regarding his personal life.

“I had such a wonderful time on that show. You go to work and laugh every day. It’s fun. The work schedule for the actors is fairly light in comparison to doing the whole one-hour world. For me, it was a different challenge. It was something I’ve never done before, live audience. It was like rehearsing a play and then you put on the play on Friday and there you go and we move on to the next one next week and it’s fun. I had such a terrific time and I miss it. I really do. I enjoyed myself on that show…The Charlie I know is a wonderful man and a quiet man and a professional at work and I don’t know him in his personal life so much. I have nothing but wonderful things to say about him.”

You can find out more about Best Friends at https://www.bestfriends.org/

2 Replies to “Mamma Mia!: Emmanuelle Vaugier – Two and a Half Men, Looking Hot and What’s New”