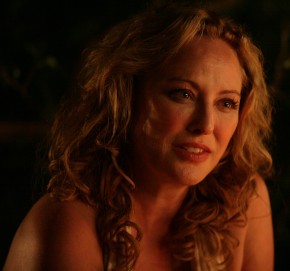 Actress Virginia Madsen has been entertaining us since the early 1980s. From roles in Candyman to her 2004 Oscar nominated performance in Sideways, Virginia has become one of Hollywood’s top actresses. She says she now gets more consideration for roles than in the past. The sister of fellow actor Michael Madsen, Virginia’s latest role is in a movie alongside Hollywood legend Morgan Freeman in The Magic of Belle Isle out this coming weekend in theaters. It is also currently on video on demand.

Ms. Madsen speaks about many topics. You can read and listen to our CYInterview at the link below:

In her latest role for the Rob Reiner film The Magic of Bell Isle, Virginia said in the production notes that she believed this project was how movies were formerly made. She believes Hollywood is not currently doing enough to push the viewer’s imagination. Ms. Madsen has some very candid words on the state of comedy movies and the entire American film industry:

“I love a lot of these big movies, but I like the ones that have a story. And I have a teenager and when I like take all of his buddies, sometimes you take ‘em all to the movies, and they’re really disappointed when it doesn’t have a good story and you know or they can tell and they won’t go. You know but it’s, I think they, there’s kind of a dumbing down of especially comedy. The dumbing down of romantic comedy is really disappointing to me that comedy’s become so negative and mean spirited.

I think as far as real stories; I think like real human stories like The Best Exotic Marigold Hotel, what a wonderful movie that is and The Magic of Belle Isle, I mean these are the kind of movies I think people are hungry for and over and over and over again we’re proven right. People will line up around the block to see these kind of movies, but we’re not getting the financing to make them and we’re not getting the kind of distribution we need to get the movie out there. So it’s really hard and it’s I think the first year even though I got to do one of these movies, it’s the first year that I felt really a little defeated you know about what’s the state of the American film industry.”

In The Magic of Belle Isle, Virginia plays a mother of three children on the verge of divorce and takes her children to her parent’s home. Her next door neighbor is a western novelist – played by Morgan Freeman – with a drinking problem. Freeman’s character believes his best days are behind him. Ms. Madsen says she could relate to her character:

“I related to that personally. I think one of the things that I identified with is that even though she’s had this blow in life you know, she’s, she was taken to her knees I think from this divorce and I think it was very unexpected, but she remains whole you know. She keeps her family intact…She believes that she needs nothing else but her girls and that became the key to the character.”

In the script for The Magic of Belle Isle, originally there was no kissing scene between Virginia and Morgan Freeman. However, she believed kissing Morgan made sense within the context of the story. She had not originally planned to tell anyone that the kiss was not in the storyline. However, her secret was blown by her fellow cast members in the project:

“It wasn’t in there. It just wasn’t in the script. I just did that. And I wouldn’t have told this story, I would have never have shared it except for that Rob [Reiner] and Morgan [Freeman] had been sharing it all over the place ‘cause I thought well, I don’t, I never kiss and tell. The truth is that it was; I saw this as a really beautiful romantic love story and I don’t think that they were all sure of that and so what was written was a nice farewell and I give him a kiss on the cheek and go back home to my nice home. Good nice little farewell.

But I was very, I thought it was more powerful than that, what was happening between me and Morgan and I saw that this love story, that’s not a man that you kiss on the cheek, that’s a man that you take in your arms and you, that’s a man that you really kiss really hard on the mouth. And if this was going to be the last time that I would ever see him, of course I would kiss him goodbye. You know there was nothing plutonic about what was happening with us. And so I kind of like, it just felt like I had to. I was just compelled to kiss him and I said, ‘Rob, I’m gonna try something. It’s just, just go with it and see what you think.’

And so you see it on film. That’s you know, Morgan’s look is exactly what happened. And then afterwards I was like, ‘Is that ok?’ And I wouldn’t have done it if I didn’t feel absolutely that it was the truth of the scene. You know I would not have disrespected a fellow actor with something that didn’t match or but it was just so clearly what was meant to happen…And Morgan loved it and I was very happy.”

Her 2004 role in the movie Sideways garnered Ms. Madsen an Oscar nomination. She says she still has Academy Award dreams:

“Sure it is. But it’s not paramount. I mean it’s not, you know can’t go into any project with that in mind and because I don’t like when I see actors doing that in movies. It’s not genuine. You know like it’s, you know, I of course I would love to go home with the gold statue. I absolutely intend on it. I’ve wanted that since I was a five year old girl, first time I watched the Oscars on TV. But it’s not, you know, I don’t specifically look for scripts like that because as an actor I don’t know what they’re gonna do with my performance. I’m not editing the film.”

Finally, Virginia agrees with her fans who believe she has not received the acting opportunities she has deserved. Ms. Madsen says, however, she is in a much better position than she was a decade ago, when it comes to being in contention for roles.

“I agree with them and I wish that it wasn’t such a struggle for me you know, but that’s been my career. I’ve never been on the top of the list. You know I’ve always been, you know, but at times I’ve not been on a list at all. At least I’m on the list now and I’m in and you know there’s always a group of names and I’m always in the mix now and that’s all I can ask for because once in a while somebody like Rob Reiner is gonna put me first. And you know if I’m not first maybe I’ll be second, but I’ll still get in and that’s you know, I still keep working and I’m in a much better position than I was 10 years ago. So I’m very grateful for where I am…It’s a struggle, but if you really think about it, these are champagne problems. I mean I get to live my dream. I get to do what I love to do for a living. I play dress up for a living; you know what I mean. It really can’t be that bad.”

The Magic of Belle Isle opens in theaters July 6th and is currently on video on demand. You can find more information about the movie clicking here.

2 Replies to “Mad About Madsen: Academy Award Nominee Virginia Madsen on Her Latest Film, The Magic of Bell Isle; Dishes on Kiss With Morgan Freeman, More”