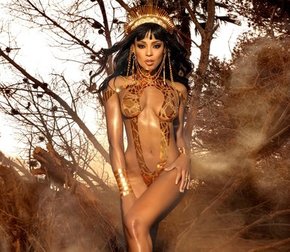 We are only a few weeks away from the 20th Anniversary of the Las Vegas show Fantasy which can be seen at the Luxor Hotel and Casino. The adult female revue produced, by Anita Mann, is an example of a success, artistically and commercially, for an entertainment offering on the Las Vegas Strip. With stunning female dancers, comedy and great music, this show has everything.

One of the show’s stalwarts is dancer and 2019 calendar cover woman, Delecia Dean. She knows all too well why Fantasy has become a mainstay in the Entertainment Capital of the World. Delecia first performed in the show more than a decade ago, when it was called Midnight Fantasy. Ms. Dean shared this about the staying power of the show:

“She (Anita Mann) was a dancer at one point and time and she understands how to run a show, what the dancers need to be able to run that show and that’s why we’ve been here 20 years. She understands advertisement. She knows that we have to get out there and we have to promote. She has to promote. She has to put that time and put that money towards that because without any of that, you have no show. That’s why a lot of shows close because of the advertisement, because of money and because of a producer who doesn’t understand that this is what it takes to keep a show alive and she understands that.”

Every year the women of Fantasy have a photo shoot for their new calendar. For 2019, Delecia was chosen as the year’s calendar cover model. On what the last year has meant to her, she shared this:

“Literally when you’re inside of a calendar that, most people don’t get to do that in their lifetime. So, actually, we’re so grateful to just to be able to be inside that calendar because that’s something you can have forever. … We’re so grateful to be able to have those experiences and love what we do and have it printed right there in front of us to see what we’ve accomplished throughout the years.”

On what is feels like being on stage, in Fantasy, Ms. Dean offered this:

“Stage is like a place where you can become someone else. You know, it’s like when I step out on that stage, I am Delecia, but I’m a different Delecia. I’m not the Delecia you would see walking to the gym or the Delecia you would see at home with my puppy. I am, it’s just, I can’t explain it, it’s just something you get out there on that stage. As soon as somebody cheers for you, it just lights you up. You’re just like, ok, you want this? I’m gonna give it to you, I’m going to perform my heart out. And it’s just like this feeling of just joy because it is a passion and you love what you’re doing and when you see other people loving what you’re doing, it just brings out this whole different persona in you.”

For more on Delecia Dean, her passion for fitness and her life as a Las Vegas entertainer, you can listen to the entire CYInterview below:

You can find Delecia Dean on Instagram clicking here.

You can find Delecia Dean on Twitter clicking here.