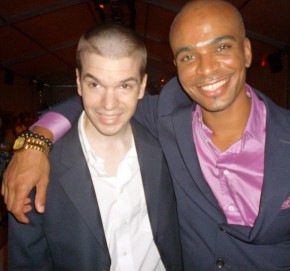 As mentioned a few days ago, I met some celebrities this past week at the Lisa Blue fashion show in Miami Beach. Among them music hottie Christina Milian [see here] and fashion designer Lisa Burke, who I CYInterviewed [see here]. I also met chef-to-the-stars and event planner Travis London. You can see our photo above.

Chef London has cooked for Justin Timberlake, Rihanna, Mary-Kate Olsen and Nicole Richie, to mention a few well known names. He’s the founder of Healthy Chic Eats. You can find more information at his website www.healthychiceats.com. The site includes a variety of recipes and a bunch of health tips. Mr. London is also a contributor to OK Magazine.

In these times, when rates of overweight and obesity continue to rise in America, Travis has some helpful health information on his website that is worth checking out.

It was great meeting Travis this past week during Mercedes-Benz Fashion Week Swim in Miami. Keep up the great cuisine Mr. London!