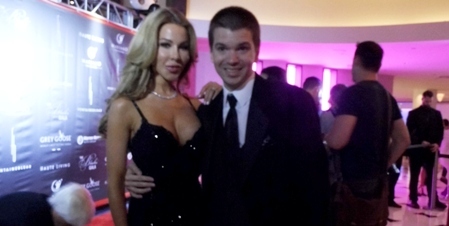 Over the last two years, we have had various opportunities to speak with Real Housewives of Miami star Lisa Hochstein, a model and philanthropist, and her husband Dr. Lenny Hochstein, a prominent plastic surgeon. See/listen to some of those CYInterviews here.

The Hochsteins’ came out to support their friends Lea and Roy Black, as they have in the past, at this year’s The Blacks’ Annual Gala – the 20th anniversary of the event. Lisa wore a stunning gown from designer Claudio Milano. The couple just celebrated their fifth wedding anniversary. They told us what they did for their anniversary and what is new in both of their lives.

You can read the highlights and listen to the CYInterviews below:

Listen to the entire Lisa and Lenny Hochstein CYInterviews:

Speaking about what they did for their fifth wedding anniversary, Lisa told us this:

“We just went to dinner, nothing crazy. I got some roses, some jewelry. I got him, you know, all men need to shop. He doesn’t shop for himself. So I bought him a few shirts and we had a little romantic night, that’s it.”

Lenny talked about their fifth wedding anniversary as well:

“The anniversary was great. Lisa and I celebrated our five year anniversary yesterday. We went, had a nice dinner together and then went home.”

Sharing with us what is new in her life, Ms. Hochstein told us this:

“We’re working on our house as everybody knows. It’s going up really quickly. So the fun part is just getting started, doing the interior… Still working on that baby, which I’m not gonna go into too many details with that and we’re getting ready for a trip to Thailand and Dubai, which is, you know, on my bucket list. So I finally get to cross that off in November.”

On what Dr. Hochstein has coming up, he offered this:

“Right now I’m working on finishing up my med spa, which I am very excited about. So I’m gonna be able to for the first time offer other things other than surgery and there’s a lot of tremendous stuff on the horizon there.”