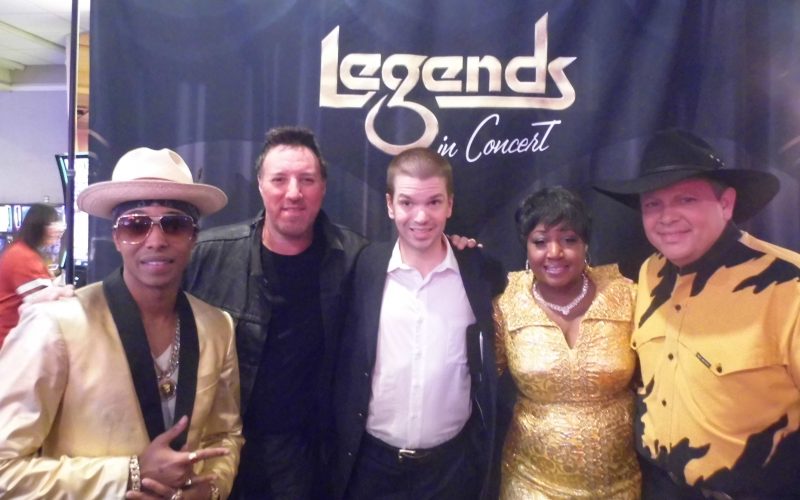 Last night, the current cast of the longest running show on the Las Vegas Strip, Legends in Concert, kicked off the start of their holiday season performances at the Flamingo Hotel and Casino. The show is comprised of a variety of performers impersonating some of the great stars in music history. These holiday shows will run through December 30th. Performing at the Donnie and Marie showroom, each impersonator sings a holiday tune or two during their set.

We had a chance to speak with Denita Asberry who has been with Legends in Concert since 1997. When she is not impersonating famous music stars, she has worked as a backup singer for Wayne Newton and Gladys Knight, among others.

Having seen the late, great Aretha Franklin perform [see here], as well as meeting her back in 2014 in Miami Beach at the Blacks’ Annual Gala – thrown by Social Mayor of Miami Lea Black [see here] and her husband, famed attorney Roy Black [see here], I thought Ms. Asberry’s impersonation of the late Queen of Soul was a terrific tribute to a star for the ages.

Denita is a great singer in her own right and sings with the kind of spirit you would want from someone impersonating Aretha. Ms. Asberry she tells us she has been portraying her since the end of the 90s. The Queen may be gone but the kingdom of her music lives on. Thanks to this Legends in Concert performance, we got to experience a taste of it again.

Considering the Queen of Soul died earlier this year, Denita told us that impersonating her is more personal, especially given that she is from Detroit as well:

“Oh it’s very personal and emotional and I’m originally from Detroit too. So I have a special, you know, part in my heart for her.”

You can learn more about Denita Asberry’s journey to impersonating Aretha Franklin and more about her music career listening to the entire CYInterview below:

You can find more information about Legends in Concert at the Flamingo Hotel and Casino and purchase tickets clicking here.

One Reply to “Legends in Concert Holiday Show at the Flamingo Hotel and Casino: Excellent Holiday Entertainment for the Whole Family; We Catch up with Aretha Franklin Impersonator Denita Asberry, More”