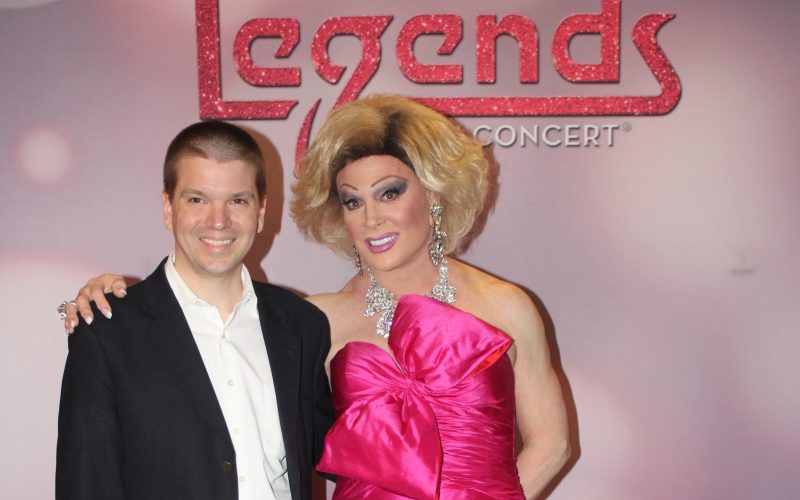 On Monday evening, Las Vegas entertainment legend Frank Marino performed the first show of his two-year contract, with the longest running show on the Las Vegas Strip, Legends in Concert. Performing at the Tropicana Hotel and Casino, as the late great comedian Joan Rivers, the female impersonator entertained the audience with his comedy while hosting throughout the performance. After more than 30 years, Frank is still drawing crowds and entertaining audiences who come for his comedic antics.

Over the last two years, Frank Marino has been through ups and downs, after his Divas show abruptly closed at The Linq in 2018. In his first conversation after the start of his run – with the longest contract in Legends in Concert history – we had a chance to CYInterview the self-named Queen of Las Vegas. See our photo from that evening above. Even after 35 years, Mr. Marino admitted he was nervous before he performed for the first time in his new home, telling us:

“I feel great. You know, I was nervous before I went on, but when the show is over, you just feel relieved that everything went well and the audience was just fantastic.”

With all the challenges in his life since 2018, Frank Marino agreed that Monday evening was a moment of vindication for him:

“It is definitely a moment of vindication. You know, everyone thought I wouldn’t come back to the Las Vegas Strip. Here I am baby. I just signed the most lucrative and longest contract Legends in Concert has ever signed.”

To hear more from Frank Marino after his first night in his new permanent home on the Las Vegas Strip, you can listen to the entire CYInterview below:

Get 40 percent off your tickets to Legends in Concert at the Tropicana using the promo code Frank40 on www.ticketmaster.com.

You can find Frank Marino on Facebook by clicking here.

You can find Frank Marino on Instagram clicking here.

You can find Frank Marino on Twitter by clicking here.