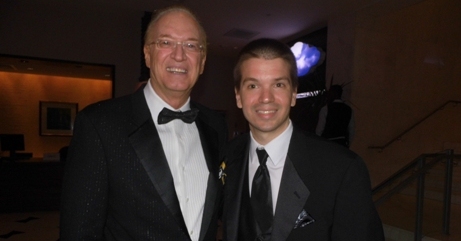 Yesterday, we reported on the 20th edition of The Blacks’ Annual Gala [see here]. The yearly event would not be possible without the good work of Miami’s socialite, powerhouse Lea Black. Her husband, prominent attorney Roy Black [see our photo above] always lends his support for the event, making the couple a philanthropic dynamic duo.

Over the years, Lea and Roy have been guests on CYInterview. Now they both share their thoughts on celebrating the 20th anniversary of the Gala, as well as what they are up to.

You can read the highlights and listen to their complete CYInterviews below:

Listen to the entire Lea and Roy Black CYInterviews:

Speaking about his thoughts on the gala running 20 years, Roy told us this:

“It’s hard to imagine. We’ve been through so many of these with such great people, great entertainment. I can’t believe that my wife has held out this long… She has more energy than 10 other people and to put this on every year is an enormous amount of work.”

From Barry Gibb who was at the first Gala to the Queen of Soul Aretha Franklin this year, Lea said she cannot believe it has been 20 years:

“No. And I am looking younger every year. How is this possible? No. I can’t believe it’s been 20 years. It went by, I was married 20 years. So my husband said, ‘The first 20 years went by in a blink.’ And it did. Yeah. … People sometimes forget why we are here and it’s great to have a party, but it is a party with a purpose. And we’re here because people that are here choose to do something to help kids at risk.”

“Justin is the kind of person that us elderly men admire because he has every girl between 15 and 25 hungering after him. So we can only fantasize about things like that.”

After much waiting, Lea told us that she is finally releasing her fiction book on the Miami social scene, in April 2015. We got a chance to read a draft of the book last year and found it to be an accurate portrayal of Miami. The characters in the book are based on some of the real denizens of the city.

“Let me tell you, the people that aren’t in it are gonna complain. The ones who are in it are gonna say I didn’t make them look good. And then everybody’s gonna make up their own story about what really happened and what I said happened and is this true or is this not true and it’s just gonna be so much fun watching all this. … It’s just a silly, fun summer read.”

During legal proceedings in the Oscar Pistorius case, Roy provided some analysis for the media. The trial received worldwide attention. Giving his thoughts on the verdict and sentencing, he said this:

“I thought the verdict was correct that’s their no chance it was pre-meditated murder because no proof of pre-meditation. So manslaughter is classically what happened here. You can’t shoot through a door without knowing who’s on the other side. On the other hand, quite frankly I think that five years was probably a more lenient sentence than I thought. I figured at least seven or eight or 10. So I was surprised. So I think the judge really believed that he did this shooting totally unintentionally. If she thought there was any intention to it, she would have given him more time.”

Speaking about what’s coming up for her, Lea told us this:

“My website’s gonna go big, big, big next week. I have waited till after the Gala to make Lea Black Beauty, really put it on the map in a big way because I haven’t had time to manage it. So once we start the flood gates, I will have to be able to manage it. So we’re starting that next week.”

Regarding what keeps him busy these days, Attorney Black told us this:

“I am very much involved in legal education, teaching at the law school [University of Miami], teaching lawyers, I love doing that. Of course, I still have a full case load of clients. They’re always interesting kinds of cases that we do like Justin’s case or will have securities cases or mortgage fraud cases, all these interesting people. And what’s great about it, what keeps me going is each case you have to learn something new. That’s what’s so much fun about it. It’s not like we do the same thing every time. You have to capture some new body of facts and that’s what keeps us young.”

You can find everything Lea Black here.

You can find everything Roy Black here.