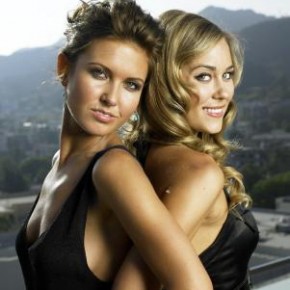 The real life drama surrounding The Hills comes back for Season Three this coming Monday at 10:00 PM EST on MTV. Earlier this week, Heidi Montag and her fiancé Spencer Pratt said some nasty things about fellow co-star Lauren Conrad. Lauren and Audrina Patridge, who is a fellow co-star also, stopped by to discuss all the real life drama that includes Spencer and Heidi’s comments, their thoughts on the troubles of young Hollywood, and what we can expect from both of them in Season Three.

Listen to the entire Lauren and Audrina CYInterview:

Chris Yandek: What should we look forward to from each of you on this season?

Lauren: “I am sorry. It’s very exciting. It’s just the next chapter. We’re filming in the summertime, which we haven’t done before. We do a lot of pool parties and go to Malibu. We’re both moving up at work and having new relationships.”

Audrina: “Lauren is 21 now so we are able to go out and explore L.A. more and go to new places. It’s gonna be a good season.”

Chris Yandek: I think we see that you guys have real jobs and it’s not just all party and no work. I think that’s such an important example to the youth today when we see all these other girls who are famous for nothing at all and you guys don’t get in any major trouble, legal troubles or any of that. You go out and party, but you do a bit of everything.

Lauren: “You have to have a balance.”

Audrina: “And you gotta take cabs. Me and Lauren take cabs everywhere in L.A at night, we never drink and drive.”

Chris Yandek: Well, I can imagine also with the traffic as well.

Chris Yandek: There has been a lot of off screen drama, so was this season hard to shoot?

Lauren: “They actually included a lot of the offscreen drama into the show which is really good. Things happen off camera that really affect our lives and we aren’t gonna ignore them and not include them in the storyline. A month of it is included.”

Chris Yandek: Now that you guys are roommates, are we going to see that your friendship will grow and you guys will spend more time together?

Audrina: “Well, the first episode will catch the viewers up on everything that went on while we weren’t filming. It’s like an hour special so it’s two in one. You really get a view on everything that’s going on.”

Lauren: “It’s a good way to start off the season. Very good episode.”

Chris Yandek: What should we see from you guys in your professional lives this season?

Lauren: “We both kind of move up at work. I’ve interned for two years now at Teen Vogue. I am actually leaving on a redeye to New York for my next assignment, but they give you a little more responsibility every year. It’s some exciting jobs.”

Audrina: “Definitely get more involved and more pressure. It’s good. We all like a challenge.”

Lauren: “I think it’s interesting that years ago in Hollywood that getting a DUI or going to rehab was something that would destroy your career and now it’s something that makes it.”

Audrina: “We see that and we hear what’s going on and you just learn from it. We personally don’t want to be like that and we work for what we get and we’re very grateful for everything. We don’t take anything for granted.”

Chris Yandek: Girls need real role models and watching these girls on The Hills who are not usually behaving irresponsibly is good. They’re not getting in trouble left and right.

Lauren: “Well, we’re not always responsible. We still like to have fun and go out.”

Audrina: “It’s hard too because it puts pressure. We know we have a lot of role models so we try to deal with situations the best we can. We know people are looking up to us.”

Chris Yandek: Lauren, I haven’t seen that recent magazine interview you did but you must’ve said something that really got to Heidi and Spencer. A few days ago Heidi called you a low life and said you are obsessed with her and her relationship and Spencer Pratt has some real nasty things to say as well. What do you make of all their comments and their attitude?

Lauren: “I was a little taken back. If you read the article, we’re doing so many interviews just because we’re all promoting the season. I really didn’t say anything bad. The only thing I said was that I had my feelings hurt, which I don’t think is rude to say. I was a little taken back when it happened, but to be honest, I don’t really have high expectations for those two so you can’t be too shocked. It could be a lot worse. I could have someone that I loved and cared about saying these things about me.”

Chris Yandek: Audrina, what do you make of all this that’s going on?

Audrina: “Well, personally, Lauren is such a great friend to Heidi and for someone to betray her and stab her in the back like that is so mean hearted. It’s not nice. Not all people are like that.”

Chris Yandek: Any good guy would respect his girl’s friendship with another girl even if he didn’t like her. That friendship just went so far south.

Lauren: “With that you have to find a balance. The guy should always respect that that’s the girls best friend so respect it.”

Audrina: “Yeah, but that’s the difference between a good and a bad guy.”

Chris Yandek: If he’s a good guy and he has got nothing to hide he should not worry if the girl’s friend is talking about him in the first place.

Lauren: “Yeah. My ex-boyfriend detested Heidi. He did not like her at all. He never came between us. I knew he didn’t like her, but he would make an effort to hang out with her and he was very nice to her. People didn’t think he was too good of a guy. That doesn’t say much about other people.”

Chris Yandek: Is this the last season of The Hills, and if it is do either of you want to do anymore TV?

Audrina: “We don’t know if this is the last season. We have been filming for like four months so we’re barely halfway done. It just depends if we get picked up for another season. That would be cool.”

Lauren: “If not than I am done with TV. Maybe Audrina, Audrina wants to act.”

Audrina: “Yeah. I want to get into acting.”

Chris Yandek: Finally, what should the millions of viewers that watch The Hills know about each of you about what’s coming up in your futures?

Lauren: “The original reason I started doing TV was kind of to build a brand. I’ve always wanted to do fashion design since I was little. I actually finished my spring collection that’s coming out in a few months. As soon as I am done with this show I just want to continue designing.”

Audrina: “I want to do a scripted show.”

The Hills: Season Three debuts August 13 at 10:00 PM EST on MTV. You can check out www.thehills.mtv.com for further information on the show. The Hills: The Complete Second Season is also now available on DVD.

One Reply to “Lauren Conrad & Audrina Patridge Dish on The Hills”