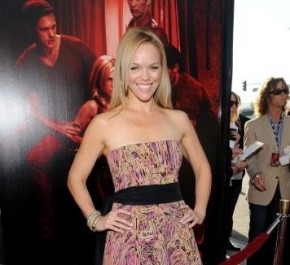 As half-sister of one of the most famous television stars of the last 20 years, Lauren Bowles is now finding her own TV stardom. As witch Holly Cleary, on the hit show True Blood, Ms. Bowles has landed the biggest role of her career. Lauren, Julia Louis-Dreyfus’s sister, told CYInterview she is a proud mother and a hiker:

“I’m a mom to an absolutely scrumptious little girl that I try daily not to physically eat because sometimes I think I’m gonna Of Mice and Men her and maul her to death because she’s so damn cute. Her name is Fia Lucille Fischler and she just turned two…I’m a huge movie buff. I love old movies. I also just love getting out in the great outdoors. I’m a bigger hiker.”

Lauren says she auditioned, along with some big name actresses, for her role on True Blood. She admits to being a fan of the show, before becoming a regular on the HBO vampire series. After being cast, Ms. Bowles started reading about the Wiccan religion. The actress believes it’s anything but satanic.

“I did have my palms read about ten years ago. The guy reading my palms looked at me and said, ‘You’re a witch. You’re very powerful.’ So that always sat with me. I did sort of laugh when this audition came up. I thought, oh, ok, well I’m a witch, so I got this. I was a huge fan of the show before I got cast on it and even bigger Alan Ball fan. So really when this came in, my goal was – there were big actresses there too reading for this…

It never even occurred to me that I would actually book this. So it was sort of just been the thrill of a lifetime to work on this show…It’s a really beautiful religion. It’s very nature based…It’s really an honoring of the sacred feminine I think in the world and using this power. The power can be harnest for good or evil. So you’ll have to tune in and find out how it’s used…Every character is really just on the search for I think really love and intimacy.”

Nine years before they began dating, Lauren and her actor husband Patrick Fischler were best friends. They met at NYU. Over the years the couple has worked together on a few things including a recent episode of Larry David’s Curb Your Enthusiasm.

“I was laughing afterwards. Stephen [Moyer] and Anna [Paquin] get it quite a bit obviously on True Blood. I asked her about it too. Is this just? ‘Cause some people think it’s nuts to do that. How could you work, spending too much time together, but she didn’t have that all. She absolutely loves it. I was thinking yes that would be so great to spend that amount of time together with your mate working on something that you absolutely love.

Curb was a quick job for both of us, but we had so much fun doing it together and working with Larry of course. It just sort of was a dream come true…We were best friends for nine years until we got together romantically and then were together for about eight years living together and stuff and I was quite happy to just say Goldie Hawn and Kurt [Russell]. They’re still together. But he proposed which I was so shocked about. So we had the most fantastic wedding in Italy and we’ve been married six and a half years now. I feel like we’re an old married couple even though. I feel jibbed by our anniversary. I want the extra credit for all the time we’ve known each other.”

Working alongside her sister Julia Lee Dreyfus, Lauren’s early TV acting experience was as a waitress on Seinfeld, where she earned her SAG card. Ms. Bowles’s character would end up taking orders and exchanging dialogue with the cast at the popular Seinfeld hangout, Monk’s. The actress says she got an up close look at the evolution of the show.

“It was so funny ‘cause I was in college I think when she started that show. It wasn’t the monster hit out of the gate. It’s what makes me laugh about the television world today. Really in today’s client, Seinfeld would’ve been canceled. They don’t let anything grow…I really got to be on the inside and watch its evolution which was just fantastic and getting to be on the show early on. I actually ended up doing a bunch of episodes. I think I did about eight of them throughout the years and then towards the end I think I was on the last season as well. So it really was such an unbelievable learning experience just watching the evolution of that show.”

Besides getting to hangout with her sister, Lauren says she spent some time with Jason Alexander. He would tell her crazy stories about going on auditions in New York.

“He would regale me about his theater auditions that he would go to in New York and commercial auditions and he was just great fun. I absolutely love him.”

Reflecting on what she learned from her sister Julia Louis-Dreyfus, in regards to the acting business, Lauren recalls a story about how Ms. Dreyfus experienced getting her big break on Saturday Night Live, at only 21 years of age. She recalls it having been difficult for Julia. Seeing what her sister went through, Lauren had no illusions about the acting business and realized the challenges in it.

“The main thing I learned really is that even though she got her break when she was like 21 cast out of Chicago to be on Saturday Night Live, that was a very difficult and that’s like unheard of. That never usually happens. I was well aware of that. Watching that, that was a very difficult show for her to be on at such a young age and that climate of that show. It’s not exactly very female friendly. Then watching her years in New York afterwards and the move to New York, though she’s had obviously an incredibly successful career, I really lived through the trials and tribulations of it with her ‘cause I was quite young, I was like in seventh grade when she was cast on Saturday Night Live.

So I really never had any illusions that this career path was easy. It was always clear to me that this was a hard road to choose. If you could choose anything else, you should do it, but I alas could not. It sort of feels like when it’s your calling it picks you. It was clear to me though if I felt anything less than that though, I should look elsewhere…Now we’re the HBO sisters because her now show is gonna be on HBO. So it’s hilarious.”

Lauren mentioned that her sister Julia is an organization freak and loves to shop, but here are some other things you might want to know about the woman who played Christine Campbell on The New Adventures of Old Christine and, of course, Elaine Benes on Seinfeld:

“She’s an avid, avid baker and cook. She’s very, we’re big foodies in our households. She absolutely loves finding a recipe that looks divine and making it. She’s got an organic garden going in her backyard. So I would say she loves, loves cooking and approaches it with a veracity that she keeps her household. Like I said, she is as type A as you can get, my sister. We joke that she’s Type A and I’m Type C.”

Lauren Bowles looks forward to accomplishing more in her career:

“I really would love to just continue to be able to work consistently and work on roles that are juicy and that you can really sink your teeth into. I’m really hankering to get back to theater as well, which is where my roots are and I’m dying to get back on the stage.”

Photo for this piece piece is credited to the Life.com website.