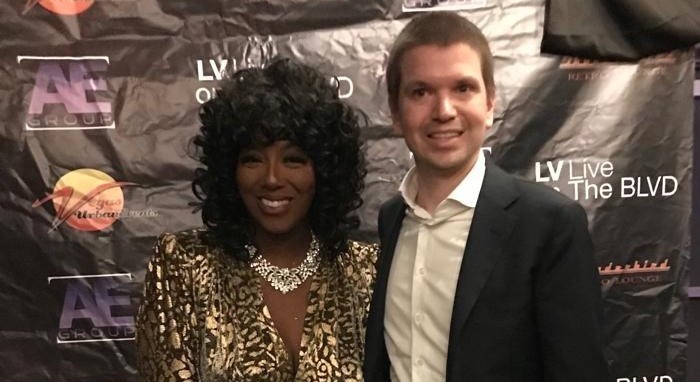 On Friday evening, Las Vegas based singer Alli’ Starr paid homage to Whitney Houston with a concert, aptly titled, I Wanna Dance with Somebody. The event took place at Gatsby’s Supper Club in Henderson, Nevada in the Las Vegas Valley.

Two weeks prior to a same named Whitney Houston biopic, I Wanna Dance with Somebody, comes to movie theaters nationwide, Ms. Starr’s Las Vegas’s show added to the anticipation for the upcoming film, which will be released on December 23rd.

After her concert, Ms. Starr spoke with us and said this about her performance of Whitney Houston songs:

“Just bring back the nostalgic feeling of where you were when you first heard those songs. … When I decided to put this show together and I titled it I Wanna Dance with Somebody, I had no idea that a movie was coming afterwards and it’s just, it’s kismet that all this happened at the same time.”

The sparkling songstress shared what she enjoys most about singing:

“I enjoy the reaction of people in how they feel when they leave my show. I want everybody to feel like, whatever they were worried about at the door, they forgot about it by the time they finished my show.”

Originally, Alli’ was going to be a mortician, but after singing at a friend’s rehearsal, the rest was history. On being one of Las Vegas’s shining stars, she said this:

“I’m living my dream. The only dream that I had was to be able to perform on a stage with a band and I literally do that every single day. So, I’m most proud out of the fact that I went after my dreams and I actually, I’m accomplishing them every single day.”

So, what does Alli’ Starr think about the upcoming Whitney Houston movie, I Wanna Dance with Somebody?

“I’m gonna cry. Every single movie that there is of Whitney I’ve seen it and I cry each time. I’m hoping that this movie really delivers the story of how her artistry developed.”

Away from the Las Vegas stage, Alli’ will be releasing an album in the spring of 2023, titled Situationship. Aside from her upcoming album, she recorded a new single Tempted, that will be heard on the new TV Series The Wright Turn which will soon be streaming on Roku.

During her career, the singer has had a chance to work with some of music’s greatest artists, including Barbra Streisand and Chaka Khan. You can hear about Ms. Starr’s experiences working those legends and more by listening to our entire CYInterview below:

Listen to the entire Alli’ Starr CYInterview on YouTube:

You can find Alli’ Starr’s official website by clicking here.

You can find her on Instagram by clicking here.

You can find her on Facebook by clicking here.

You can learn more about Gatsby’s Supper Club by clicking here.