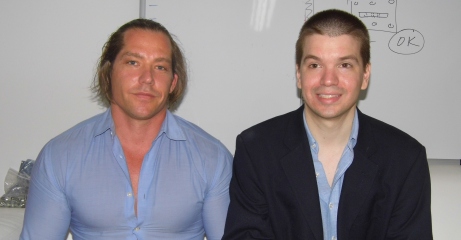 The nightlife success has now led him to South Florida. It has been reported in the near future, Cy and his fellow Las Vegas partner Cory McCormack are opening the anticipated new venue on South Beach in Club Adoré. It is located at 2000 Collins Avenue.

Mr. Waits tells us his plans for his new nightclub and future plans for Miami among other topics. You can read the highlights and listen to the entire CYInterview below:

Speaking on why he wanted to bring his business endeavors to Miami Beach, Mr. Waits told us this:

“It was a very easy decision. South Beach is, I mean it’s probably one of the most amazing places I’ve ever been to. For the last 16 years I’ve been coming to Miami. I’ve always wanted to expand and make the move out here. It just never, the right opportunity, it finally came up and you know, right space, right size, great location and just the time was right out here in Miami.”

With Club Adoré slated for an opening on South Beach in the near future, the entrepreneur tells us how this club will be different than any other:

“The difference is that we have been able to really refine the business. There’s a lot of competition in Las Vegas as you know and I’ve done business, I’ve done clubs in four different states so this is nothing new to me to come somewhere new and understand the market, learn it and you know, recreate something. So I think we’re gonna be very unique in the way that we run our club, which is gonna be, you know it’s an experience. Rather than selling a bottle or selling a DJ, we’re selling the experience of you know, the high energy, fun, great night. … I’m not so much trying to bring Las Vegas to Miami. There’s definitely, there’s some key elements that I would love to bring out here that I think that, you know, maybe Miami’s missing, but I’m not trying to change Miami.”

Discussing why he reportedly has been very successful with high profit margins for the venues he has run, Cy tells us this:

“I started at the bottom, I started in security and I’ve worked every position in the club. So I understand every position very well. I mean even in the restaurant side of it. So it is really, it’s the details of the business and knowing how to make the most out of the dollar and save the most out of a dollar. … We don’t have any sectioned off areas. Everybody that comes in the club, we like them to feel like they’re all VIP’s.”

Beyond Adoré, Mr. Waits is expanding in Miami. He is going to have an eatery next to his new nightclub that provides different kinds of food and drink throughout the entire day. There are also plans for a restaurant in a hotel:

“Yes. Actually where we’re sitting right now, I am going to turn this into a, during the day, a juice bar, wraps, fresh squeeze, organic, great stuff and at night I’m turning it into an organic pizza place. It’s right next to the club, it’s right next to our valet. So it seems like a great fit. Also we’re looking at doing another great restaurant, I can’t talk too much about that, in a hotel out here.”

Speaking about the state of Las Vegas, the longtime mogul of Sin City nightlife said this:

“It’s had a lot of growth in the last 15 years and I was very lucky to be part of that and you know, forming it into what it is. But right now, it’s gonna be a little tough out there because there’s a lot of supply and our business works off the supply and demand and when you have too many tables and too many hotel rooms, it brings that demand down. So it is a very tough business. There’s a lot of clubs opening out there, there’s some great operators in Las Vegas as well, the TAO Group, AMG [Angel Management Group] and Light Group. So everyone’s expanding. I know Victor Drai’s doing a whole new project out there and they’re all very, very large clubs, they’re anywhere from 40,000 to 60,000 square feet. So it’s a tough business out there right now.”

For Club Adoré, Cy is bringing in people from across the country to make the South Beach nightclub successful. It will be interesting to see the progress of the newest club to hit Collins Avenue:

“What I do, I feel like it’s very unique. We are, we try to make, again it’s an experience. So we want to bring in people that have a lot of experience giving that, you know, unique experience. So, you know, we found the best people we could, which it’s either hosts, we brought in eight hosts from New York, L.A., Vegas. We brought in, half of our waitresses have come from L.A. and Vegas and New York. And I just think it’s, for us it works, it’s some new fresh faces and a lot of these people are very good at what they do.”

You can find more information about Club Adoré at the official website clicking here.