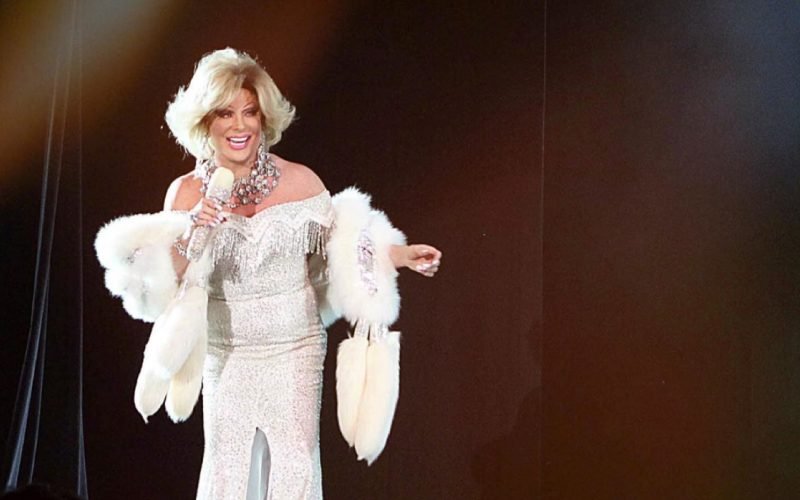 Frank Marino is a Las Vegas entertainment legend. The female impersonator has been performing on the Las Vegas Strip for more than 30 years. He is best known for his act as comedy legend Joan Rivers. His career in Las Vegas began in the 1980s, when he was part of An Evening at La Cage, at the Riviera Hotel and Casino. Today, Mr. Marino is one of Las Vegas’s most important performers. Currently, he is the host of the longest running show on the Las Vegas Strip, Legends in Concert.

In March of 2020, Mr. Marino and the rest of Las Vegas’s entertainment community had their productions put on hold due to the coronavirus pandemic. On entertainment coming to a halt in the city, he said this:

“For me, it was really weird. Because for 36 years, I drove to the Strip every night, did my show and had a routine and all of a sudden in the, you know, overnight, everything shutdown. So it’s really, like a shock for me.”

Returning to the Las Vegas stage earlier this year, as the host of Legends in Concert at the Tropicana Hotel and Casino, was not without its challenges:

“Well, I’ll be honest, it was actually, kind of the first time I ever had stage fright if you want to call it that because it had been so long since I did any kind of performing at all that, you know, it’s one of those things where, you know, they say you just get back on the bike and you can ride again, not so with entertainment. You know, things have changed, situations have changed, things that are funny have changed. So I had to really, you know, navigate my way through that.”

Earlier this year, music legend and past CYInterview guest Mary Wilson [see here] of The Supremes died. Frank and Mary were friends. Frank told us he spoke with Ms. Wilson days before she passed on:

“Mary Wilson, part of The Supremes like that, called me up like three days earlier telling me, ‘I sent you a Christmas gift three times. Why does it keep coming back? Do I have the wrong address?’ And she had my address as one word instead of two words. So we straightened that out and I was talking to her about going to lunch and she said to me, ‘Yes. Let’s do it in a few weeks because I have to get into this doctor’s appointment.’ Never went into what the problem was. It wasn’t my business.

But I was like of course you’re Mary Wilson, you know. Don’t you have a concierge doctor? So I gave her the name of my concierge doctor ‘cause I can’t believe she actually had to wait. So that being said, she must have sent the package out that night ‘cause three days later the package comes in the mail and when my partner Alex was on Facebook writing, you know, a thank you note to her, the next thing I know that he wakes me up and he says, ‘Mary Wilson passed away.’ Because all of a sudden it was all over the web. And I gotta tell you, I was in shock that day and it still hasn’t gone away. I’m still in shock. It’s a great loss, she was a great friend and it was a difficult time.”

Featured columnist Jay Bildstein joins us for this CYInterview and speaks with Frank about the state of comedy, the future of Las Vegas and much more.

Listen to the entire Frank Marino CYInterview on YouTube:

Get 40 percent off your tickets to Legends in Concert at the Tropicana using the promo code Frank40 on www.ticketmaster.com.

You can find more information about Frank Marino and Legends in Concert’s current schedule at the Tropicana Hotel and Casino by clicking here.