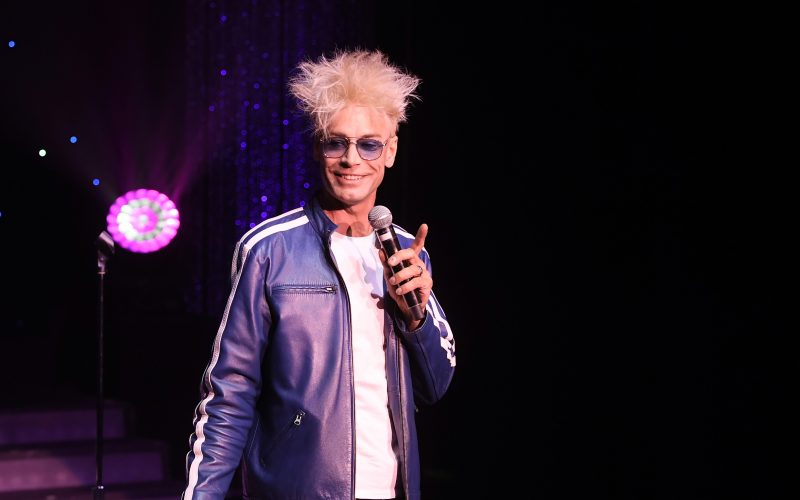 2022 was a busy year for Las Vegas headliner Murray the Magician. Aside from his show, which plays at the Tropicana Hotel and Casino, Murray Sawchuck entertains the crowd during intermission, nightly, at the female revue Fantasy at the Luxor Hotel and Casino. At Fantasy, the past CYInterview guest [see here] keeps the crowd laughing with a comedy routine, including some of his best magic tricks.

Away from the stage, recently, Mr. Sawchuck became an author for the first time, with a children’s book titled At Nighttime We Are All The Same Size. The book was inspired by his wife, Las Vegas showgirl and past CYInterview guest Dani Elizabeth [see here] and one of his dogs Bailey.

Additionally, the magician released a comedy special, Murray the Magician: Itz Gone, Live From Las Vegas. The special can now be seen on the video on demand service Tubi. Being an expert on magic memorabilia, he returned this year on the popular reality TV show Pawn Stars.

Speaking about his new children’s book, At Nighttime We Are All The Same Size, the magician said this about the story’s message:

On producing his own comedy special Murray the Magician: Itz Gone, Live From Las Vegas, the Las Vegas headliner shared this:

“I know the material, you know, I’ve been doing it for years. I thought, I’ll produce my own. That way I’ll own everything and I can sell it and then I’ll own it always. So, I went and did that and we shot at the Plaza Hotel downtown last year and we’ve gotten contracts with STX Films, which is a distribution company out of L.A. and they sold it to Tubi, which is great.”

Giving his thoughts on the Las Vegas entertainment scene in 2022 and what he sees for 2023, Murray offered this:

“I see a lot of resurgence of things that said they’d come back this year and now they’re really back or not. I think 2023 is gonna even the playing field in entertainment. You know, this last year there’s a lot of shows that were put on the Strip, but also, out there, that there’s a lot of government money, PPP [Paycheck Protection Program] money used to push shows and make things happen because they had to spend that money that came in, etc, etc. So, we saw a lot of shows last longer than they should’ve or could’ve or whatever the case is and I feel like 2023 you’re gonna see the playing field a little more leveled.”

Murray the Magician also speaks about his landscaping business, performing in the female revue Fantasy and much more. You can listen to the entire CYInterview below:

Listen to the Murray the Magician CYInterview on YouTube:

You can find Murray’s comedy special on Tubi by clicking here.

You can find more information about Murray’s new children’s book At Nighttime We Are All The Same Size by clicking here.

You can purchase tickets for Murray’s Las Vegas show and find more information at his official website by clicking here.