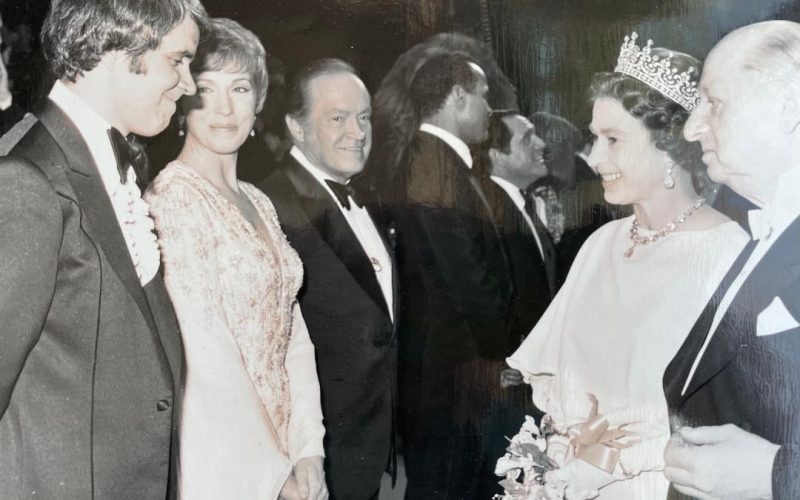 Earlier this week, impressionist, comedian, actor and current Las Vegas headliner Rich Little joined us to share his stories of his encounters with Queen Elizabeth II and The Royal Family. You can see a photograph of him and Queen Elizabeth II above.

Besides Queen Elizabeth II, Rich also shared stories about King Charles III – when he was the Prince of Wales – and Princess Diana.

The first time Rich Little met the Queen, it was for a simple hello and a handshake. The second time he met Her Majesty was a little more personal. Mr. Little performed at an event for Queen Elizabeth II at the London Palladium. He shared that experience with us:

“This time when I shook her hand, she knew who I was. And she said to me, ‘I enjoyed your performance. I like people that do impressions.’ And I said, ‘Oh, well that’s great. Thank you. Thank you, your Majesty.’ And that’s all she said and I thought that was kind of interesting that she liked impersonators and liked my performance because we all performed that night. That was the last time I saw her.”

A few years later, at the Prime Minister of Canada’s residence in Ottawa, Rich met the Queen’s son, the Prince of Wales. At a dinner that night, Rich was seated next to the man who would become King Charles III. Mr. Little revealed this about the meeting:

“I sat next to Charles, and we talked, and he was interested in a lot of things. He wanted to know who I knew and he wanted to know about Frank Sinatra and Bing Crosby and people I worked with and we had quite a good conservation.”

As the evening progressed, the Las Vegas headliner asked Prince Charles about his mother, Queen Elizabeth II and if it were true that she did impressions. Charles confirmed that the Queen had a talent for impersonating celebrities. Rich shared this about that experience:

“When I was sitting next to Charles, I mentioned to him. I said, ‘Is this true that your mother does impressions.’ And he said, ‘Yeah. She does quite a few.’ And I said, ‘Really?’ I said, ‘Who does she do?’ And he said, ‘Well, she does Margaret Rutherford.’ Who was an older actress who made a lot of comedies in England. … He said that she imitated her and she also did a pretty good Katherine Hepburn and I found that interesting. And then he said, ‘She does Joan Rivers.’ And that really intrigued me. And I said to Charles I said, ‘Joan Rivers? Your mother does Joan Rivers?’ I said, ‘Oh my God, I would die to hear that, that intrigues me.’”

Princess Diana was also in attendance, the evening that Rich met Prince Charles. This is his story about the Princess of Wales:

“At that dinner at the Prime Minister’s residence, after we did this show and I was sitting next to Charles on my right and then Prime Minister Mulroney was on the left and Michael J. Fox was across from me and Diana was sitting at another table. And at the time, I thought that was a little strange. Why wasn’t she sitting with him? And then I found out later, I didn’t know at the time that they weren’t speaking. Their marriage was starting to crumble at that point and she didn’t want to sit next to him. She was very gracious and very charming and beautiful woman and was very nice to me and said a lot of nice things about the show and everything, but they had no connection at all.”

Aside from The Royal Family, Rich also spent time at the White House during the administration of former President Ronald Reagan. On what the difference was between meeting a royal and meeting the President of the United States, the show business legend said this:

“Ronald Reagan was really a down to earth guy with a great sense of humor and he, you know, you never felt you were talking to, you know, anybody that important. He was just like a lovable older male, older grandfather. He just had this twinkle in his eye and he just was so down to earth that you never felt he was really that important and he was great. He liked humor and he even did a few impressions of his own for me.”

During our CYInterview, Rich Little did an impression of Queen Elizabeth impersonating Joan Rivers. Additionally, he shared that he is now doing President Joe Biden at his weekly Las Vegas show at the Tropicana Hotel and Casino.

Listen to the entire Rich Little CYInterview on YouTube:

Rich Little performs weekly Thursday through Sunday at 6:30 PM at the Tropicana Hotel and Casino on the Las Vegas Strip. You can find more information by clicking here.

Rich Little’s memoir People I’ve Known and Been was re-released this year. You can find more information by clicking here.