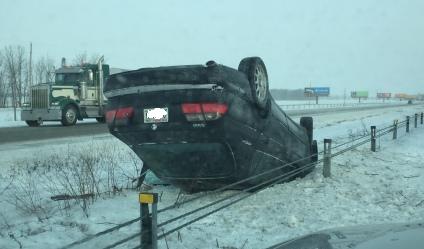 Wisconsin winters are beautiful. The many combinations of precipitation, winds and temperatures make for a changing landscape that is fascinating to observe and dangerous to drive in. Just as low temperatures and water can form many different shapes, language too, combined with other factors will paint a different picture every time. I came to this thought during a conversation with Sgt. Luke Newman from the Fond du Lac State Patrol.

At the beginning of February, I was in a car accident caused by winter driving conditions. I’m thankful to all the people who stopped to offer their help. Fortunately, nobody was injured and a State Patrol was not far away and responded to the accident immediately. An ambulance arrived very quickly at the scene and and soon enough, I was sitting in the back of a patrol car on my way home. Shivering and shaking form the shock of the accident, the conversation with Sgt. Newman was a good diffuser of stress. We talked about our jobs, and he touched on a key subject. How often do people really need an interpreter?

Often times, law enforcement officers, attorneys, and even judges try to make a quick and unfounded determination of someone’s need for a language interpreter. They don’t ponder on what factors might be involved in determining that need. Not Sgt. Newman, he actually thought to ask a language access professional!

Language acquisition is not a matter to be seen in black and white. It’s a process unique to each person. Even if you exposed people to the same type of language learning environment, the results would be different.

Time spent in a country is not necessarily a determining factor for language learning. I once heard a judge say: “She’s been in this country for 15 years; she’s got to speak English”. Not really. If a person arrives to a country as an adult, chances of learning the language, drop. Children learn languages easier than adults. If that person spends time mostly surrounded by family and coworkers who speak her native language, chances of learning a second language diminish. No formal Language education? Now we’re really at the bottom of the scale. People can spend a lifetime in a country without learning the language.

Then again, language learning comes in every shade, if a person has a special ability for language acquisition, all the factors in the paragraph above, may not impede that person from learning a language.

Language involves listening, reading, speaking, writing. Some of us are better at one thing and not so good at the next. A language learner may be able to understand more and speak less, or have an easier time reading than listening. It all depends on their unique abilities and environment.

Last, there are feelings. Emotions and language are intertwined. When we’re emotional we tend to use our native language. Being in a stressful situation might impede your ability to communicate in a second language.

My short answer for law enforcement officers is: If someone does not speak English as their first language, always offer to have an interpreter. Not doing it, it is like driving on black ice. Everything looks fine, you just never know when you might have an ugly result.