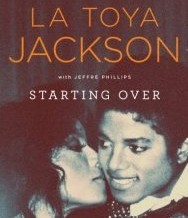 Back in March, La Toya Jackson did her first CYInterview [see here]. La Toya provided some amazing stories about her life with The King of Pop, the late Michael Jackson, as well as her take on his death.

Recently, Ms. Jackson released her latest memoir titled Starting Over. In the course of its over 300 pages, people will learn all about her life. Included is her description of being abused by her now deceased, ex-husband Jack Gordon. La Toya writes candidly of how she got past that dark period in her life and moved on. Of particular interest to fans are the numerous Michael Jackson and Jackson family stories covered in the book.

La Toya came back to CYInterview to talk about her book, as well as the latest in her ongoing search to find out who murdered her brother and how Jackson fans can help in her quest. Ms. Jackson wants everyone to know she is not an opportunist trying to capitalize off her dead brother’s name. You can read and listen to the whole interview below.

Chris Yandek: Reading the book, after I finished the book and when we spoke back in March, you seem to be in great spirits from our last talk and everywhere I’ve seen you in recent years, but after reading the book, do you still struggle with anything, are you in therapy or doing anything to still heal yourself from everything?

La Toya Jackson: “That’s a great question Chris. First of all, thank you for having me on your show again. It’s good to speak with you. But no, the book was written, Starting Over, I am happy that you read it and as you know it’s encouraging women and anybody who feels that they need to do something better with their life and start over with it if they’re enduring any abuse whatsoever. That it’s important that you get out of that relationship and really make a better life for yourself and start over and go get help.”

CY: You’re telling me that you’re in the best spot you possibly could be? There’s nothing left to repair?

LJ: “Well, I’m in a very good space right now, but there is something to repair of course meaning I want desperately to find out what truly happened to my brother in that sense, but Starting Over was not about that. He just happened to be a part of my life so the last couple of chapters are about what happened to my brother and him and what he told me would take place, but no, as you know, I’m very happy with my life.

I was able to start over and I’m very happy that I was able to do this by just really putting out everything that happened in my life and letting people know that you cannot allow other people to control you, to manipulate you, to beat you, to lock you in closets and all these things that happened to me, to take away your self esteem, your self worth can control you. This is not the way life is meant to be. Please get out of those relationships and do start over and start anew and that’s what it’s all about.”

CY: You bring up a perspective of Michael that I feel hasn’t totally been generally thought about. You show a side of Michael that feels vulnerable and scared regardless of all the money, success and life he had. You describe it in a way I believe that he didn’t see himself as a powerful person with everything at his fingertips even though he did have those things and probably many people thought that. He didn’t seem very assertive. Tell me about that and do you think this is something people just don’t really know or understand?

LJ: “No. What I’m saying is that when I say this Chris is because his life was like my life. In other words, this guy [Jack Gordon] came into my life, my parents asked him to go to Japan for them because they couldn’t make it and that’s when he took my passport away from me and said, ‘You’re never going back again.’ He controlled me.

These people come into Michael’s life because of his kind, meek personality and they started controlling him and the world sees him as this powerful person, which of course he is with all the money, but yet these people are the ones that manipulated and controlled him and did what they wanted to do and at the end, he was living in fear. Now do you understand what I’m basically speaking of?”

CY: Well, as you know and as you mentioned earlier in this interview and as we talked about back in March, you’re still on a continued search to find out who caused the death of Michael. I wonder how the search is going and has there been any new evidence since we spoke in March that you’ve come across?

LJ: “It’s very, very, well there have been things that have come out, of course. I think they postponed the trial, of course, once again. However, I think it’s very, very important, now they’re involuntary manslaughters. I always thought that’s what they would probably say and now Dr. Murray is saying that Michael injected himself and I am here to tell you that I have spoken to many doctors prior to this and asked them and they said, ‘It’s totally impossible. You can’t do this.’

When Michael first passed, the coroner came and said that, ‘Geez, all the drugs that were in Michael’s body were the drugs that were administered to him that night and there was enough propofol in Michael to have killed an elephant.’ And he said, ‘Whoever did this, did this intentionally and they murdered him they wanted him dead.’ And those are the words and that’s what happened to my brother. You cannot do this. They’re trying to say he did it himself. That’s totally untrue

Michael was very clean. He was very happy. As far as with his health is concerned, meaning that, his life, he was happy that he was able to do the things he wanted to do as far as sleeping is concerned and things of that nature and he had gone to rehab with that. But as far as him being physically healthy at that particular time, no, he was sick. He really was sick. He was freezing all the time and he was just, he was unhealthy.

He weighed 112 pounds, yet they reported 136 I believe it was or 135 pounds, but no, he had issues back then just before he passed with those struggling and not being able to complete a complete song [during the This is It rehearsals], but yet they made it look as if he was very happy and energetic with the songs. He will give his all, but at rehearsals he never does and he would’ve done a much better job than you guys saw.”

CY: There’s a lot of mentions and stories of Elizabeth Taylor and Marlin Brando in Starting Over. In recent months, there was a report that after 9/11 Brando, Taylor and your brother Michael got in a car and drove across the country on a road trip together ending up in Ohio. Do you know anything about whether this story is true or not?

LJ: “Well, Michael got a camper for Elizabeth to get back home from 9/11 and she was in a camper going back home and of course at that time everybody was looking out for everyone’s safety at that particular time. But you know, I never asked him if he was in that camper with her or not. I never did ask that. But I think I was told at some point and then got out. I’m not so sure. But no, Marlin Brando has always been a friend of the family and so has Elizabeth. They would always come over and watch movies with us all the time and have dinners. Elizabeth Taylor would come over and have dinners. This is when we all lived together at Hayvenhurst and yes they’ve been friends for years.”

CY: I think that Michael’s fans truly want to believe in anyone who might uncover answers on your continued search, but what do you say to Michael’s fans about what they can do at this point and time?

LJ: “I’m asking and urging anybody that knows anything about anything, please help and speak out and please tell what you know. If it’s a paralegal who were working with these people, if it’s a secretary, please by all means do tell. Because I do believe, ‘cause I know the truth, I know this is what they did. It was a conspiracy, but I do believe that there are people out there that the best is gonna get to them and they’re gonna say, ‘You know what? I can’t take this anymore. I’m just gonna have to go out and tell what they really did to him and that La Toya is right. She is telling the truth. This is what’s happening. Michael did know this is gonna happen to him. So fans, if you do anything, please by all means do speak out.”

CY: Starting Over is the name of the book. Thank you so much for joining me today. La Toya, in closing, is it really hard though that there are a set of Michael Jackson fans that feel like you’re an opportunist in some way. Is that hard?

LJ: “Well, I’m not an opportunist. You have to remember something, he’s my brother and guess what? I want justice for my brother and the book is not about Michael. 85 percent of that book is about me starting over and women encouraging them. The only other percentage, is he’s a part of my life of what happened to him to get justice. Opportunist? Absolutely not. I think people who don’t know me, that’s probably the impression they want to get.

CY: La Toya, thank you so much again and I know that was a hard question to answer but there’s a lot of people who wanted me to ask you that one. Thanks so much and maybe we’ll talk again for a third time one day.

5 Replies to “La Toya on her Brother Michael Jackson’s Death: Says, “Follow the money trail…” Talks about her Book, Starting Over”