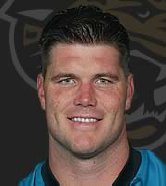 Listen to the Kyle Brady CYInterview:

Kyle Brady: “I am doing good.”

CY: What are your thoughts on this upcoming season with the Jacksonville Jaguars, and how it’s different from past years?

KB: “Well, there is a lot of optimism this time of year on our team. That’s obviously the case for all 32 teams in the NFL because we have a clean slate. We feel good about the direction this team is going and this organization. We have had a chance to adjust to the new coaching staff and management team. We have also had a chance to get used to each other as players. There are a lot of new guys that have been brought in here in the last few years. We have had a chance to get to know each other in the off season program, and developing a relationship that I think is going to be important in going forward to succeed on the field.”

CY: Do you feel this team can make the playoffs or be a contender in a very tough AFC South with the Indianapolis Colts, Tennessee Titans, and Houston Texans this season?

KB: “It really remains to be seen. Obviously we are optimistic. We feel good as far as what we can do as a team. It’s going to be a matter of going out there and executing every week. You have to go out there and limit the stakes in the key situations. As we have been told by Coach Jack Del Rio, games are usually decided in the last four to two minutes in the game. The decisive factor will be if we can win games when it’s on the line.”

CY: What are your thoughts on Jacksonville Jaguars head coach Jack Del Rio as he goes into his second season?

KB: “I think he is doing a great job. He is doing all the right things when it comes to an organized group. They have everything scripted from top to bottom. He is good at making adjustments. Sometimes things come up and people get hurt. He has been very efficient and is a player coach. He listens to us as players, and listens to their opinions, but he also gets done what he wants to get done.”

CY: Where does Byron Leftwich rank with other quarterbacks you have played with?

KB: “That’s hard to say at this stage. Last year was just his rookie year. There are always a lot of things to learn in the NFL. Things move faster than anything. I can’t necessarily engage against all the great ones that have played their rookie season. I can go by what I have heard, but Byron is another you would want to see any guy do as a young quarterback. He is committed to the film study and studying his book. He is respectful of everyone around. He tries to listen and absorb everything he is being taught. I think he is coming along very well.”

CY: It must feel good to be the third all time leading receiver in Jacksonville Jaguars history behind Jimmy Smith and Keenan McCardell. From the 1999 to 2003 NFL season you have 204 receptions for 2,213 yards and 11 touchdowns. Tell me about your feelings towards that.

KB: “It’s something I do feel good about. Coming into the league I did have high expectations being a first round pick of the New York Jets. I didn’t get a lot of balls up there for various reasons. I think there is a bit of stigma or stereotype that I was born as a blocking tight end. I think that it exists to this day. It’s been neat to have more opportunities down here to get the football, and be third all time on the franchise list. Typically wide receivers will get more balls, but it’s something I am definitely proud of and feel good about it to say the least.”

CY: What were your thoughts on the NFL training camp and pre season this 2004 spring and summer?

KB: “I think we as a team and organization moved forward. We had a great commitment in the off- season from all the guys. They wanted to see 80 percent commitment to the off-season program. We got that from all the guys. Some guys were here for a 100 percent of it. I think it reflected in our ability to handle the workload in the summer. When the hot weather came out and you put the pads on, there was nobody falling out. There was competition daily. It makes all the difference in the world.”

CY: You were selected as the 9th pick overall by the New York Jets in the 1995 NFL draft. What were your thoughts on the New York Jets organization, and what was the main reason you have been here with Jacksonville since 1999?

KB: “Well, as far as the New York Jets go, I still keep my eye on them. They have fewer players that I ended up playing with when I was there. There are so many trades and transitions where players go from one team to the next. I keep my eyes on them and hope the best for those guys. It was a different organization when I was there. I was there for the Bill Parcells years and now they have Herman Edwards. I still keep in touch with a few of those guys. They tell me of the things that go on up there. I still have a place in my heart for them. After the 1998 season I became a free agent. Bill Parcells called me into his office and said he wanted to keep me, but didn’t know what the free agent market might show. He put the transition tag on me, which for people who don’t know, it basically makes you a restricted free agent. It makes you able to go around and shop the free agent market. You can see what teams are interested in you, then go back with your contract offer, and present it to the team you’re with. They can decide whether to match that offer or not and if they don’t, you’re officially a member of another team. I ended up with the Jacksonville Jaguars in February of 1999. I got a five-year contract and thought it was a good organization. They had made the playoffs several years in a row and the AFC championship in 1996. I felt they were headed in the right direction as the New York Jets. We parted good ways, and now I ended up here for my sixth year.”

CY: It must be very different playing in the AFC South compared to the then AFC East with the New England Patriots, Miami, Dolphins, Buffalo Bills, and the Indianapolis Colts who you still play when they were in that division.

KB: “It is different. There is a tradition up there in the AFC East that has been long standing with the teams that have been involved there, which are the Miami Dolphins, New England Patriots, Buffalo Bills, and New York Jets. It was a need to be part of that tradition for a couple of years to go out to Buffalo, New England, and Miami. This is very different here. We have several different expansion franchises in Tennessee, Houston, and us. The only one that isn’t is Indianapolis. There have been some good rivalries formed here since the AFC South was developed.”

CY: You played at the University of Penn State during your college career. Give me your thoughts on head coach Joe Paterno and are you surprised he is still coaching at Penn State University?

KB: “I had a great experience there. Joe Paterno was a great coach and still is. I am not surprised he is still coaching. People used to ask him when he was going to retire and hang it up, but it’s something he enjoys. It’s not a big stress for him.”

CY: How much of an inspiration was Joe Paterno on young tight ends like your self?

KB: “More than just tight ends. I think he is an inspiration on young people in general. We all influenced each other in one way or another, by being around each other every single day for four or five years. He installed a lot of good things especially the respect for academics. How in reality very few of the guys at that level were going to use anything but their academics. The importance of punctuality, hard work, discipline, and structure in life. A lot of things I really needed at that time.”

CY: What is it like to play against the Ohio State’s, Michigan’s, Iowa’s, and the other teams in the Big 10 week in and week out every college season?

KB: “It was great. I had a neat opportunity at Penn State. The first three years being there we were independent. We had a chance to go around the country and play everybody. The USC’s, Miami’s, and Notre Dame’s. We went to the Big Ten the last two years and had a chance to experience what Big Ten life was like. The first couple of years we were 9-2 and the last year we went 11-0. To play in some of those college environments like the horseshoe in Columbus Ohio and the big house in Michigan, it was great. I wouldn’t trade any of those memories. You really see why it has been such a good conference for so long. The teams in there are traditionally consistently good teams.”

CY: For someone who played in the Big Ten, what are your thoughts on the instant replay system they have started using this year?

KB: “I think it’s a good thing. I think it has worked out good in the NFL. It creates a more competitive environment in which fewer mistakes can turn an outcome of a game. It’s going to make it better for a lot of players because there is some mistakes in college that change the direction of the entire season. If you lose one game at a critical time, your season is ruined. A team can get their season ruined by one human error.”

CY: Finally, tell me what you would like to achieve for the rest of your NFL career.

KB: “Just to keep working hard. Make the best of it. I am going to take it year to year at this point. Try to be the best player at this stage.”