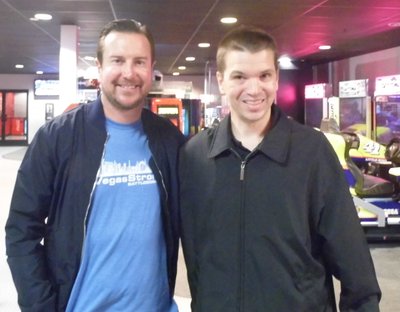 On Tuesday November 28th, famed Nascar driver Kurt Busch held a Vegas Strong event at Pole Position to raise money for those impacted by the Mandalay Bay shooting back in September, that killed more than 50 people and injured over 500. Pole Position is an indoor go cart race track located near the Palms Hotel & Casino. See our photo with Kurt Busch at the event, above.

Proceeds from the evening benefited the Drivers for Vegas and Keep Vegas Strong charities. Drivers for Vegas is working alongside Zappos, who has been matching donations that have been made to the charitable organization.

A Las Vegas native, Kurt Busch tells us why he felt it was important to give back and be part of the Vegas Strong movement. Additionally, we speak about Nascar’s expansion in the Las Vegas market and what his Nascar future holds for him in 2018.

You can find more information about Drivers for Vegas at www.driversforvegas.com