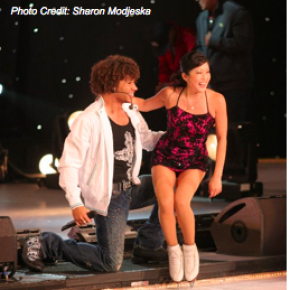 Kristi Yamaguchi captured America’s hearts at the 1992 Olympics by winning the gold medal. The now 37-year-old mother of two daughters opts for the quiet life over the spotlight. Though every year around the same time Kristi Yamaguchi and Friends comes together and the public sees their favorite skating stars.

The show airs this year on November 25th on NBC at 4:00 PM. The controversy, battles, and media attention of the 90’s figure skating world won’t soon be forgotten by her or the public.

Listen to the Kristi Yamaguchi CYInterview:

Chris Yandek: What has Kristi Yamaguchi been up to in recent years besides starting a family?

KY: “I think you just be mom. I have two girls now. They’re almost two now and four. They’ve been keeping me busy at home. We shuttle through California and Raleigh, North Carolina and Minnesota so we’re on the go quite a bit.”

CY: I am sure they have changed your life in a big way.

KY: “Absolutely. As a skater my whole life, I focused on my career and myself so it’s been wonderful to just share so many new things in life with two little ones and just be a mom and kind of experience all that, joys, and the challenges too.”

CY: NBC will be airing Kristi Yamaguchi and Friends on November 25th. What should we look forward to from this year’s show?

KY: “Well, it’s a great high energy fun show this year. We definitely geared more towards all of our children cause the skaters all have kids and they’re part of the show. It was fun to not only perform with them, but add something special that they would love and that was the Cheetah Girls and Corbin Bleu who is known from High School Musical and High School Musical 2. It really just has a fun vibe and the audience is fabulous. You get to see some great performers as well.”

CY: Nancy Kerrigan, Kurt Browning who is co-hosting this show, and others will appear, but what is it about you guys from the 90’s that we can’t seem to get enough?

KY: “I know. We’re all getting old (laughs). I don’t know. I think there was just so many other events and competitions that went on through the 90s. I think the audience connected with the skaters from that generation and it’s great – a fun group, obviously my alumni group. It’s always just a fun time when we can get together and do a show like this. Not just skaters anymore. We’re also parents. We kind of trade secrets and commiserate together.”

CY: Michelle Kwan is going to try to compete at the Olympics in 2010 and she’ll be 30 at that time, but why don’t we see more older competitive skaters in their 30s and 40s in singles competition?

KY: “Well, that’s pretty easy. As a woman you hate to say it, but I think you really do peak in your 20s, like in your early 20s. You’re still able to focus on yourself and your career and training. I think as a little girl I’ve always had a dream obviously of being a skater, but beyond that I always dreamed of being a mother, getting married, and the whole white picket fence thing. As far as skating, training, competing, and on top of that being a mom would just be really…really difficult. I don’t want to be a part-time mom. I want to be a full-time mom and be there for my kids and watch them grow up. There is really no compromise there.”

CY: You represent everything American and you have the 1992 Olympic Gold Medal to prove it. Is this country ready for a woman president?

KY: “Sure. Who knows? I don’t know, if it’s Hilary, who knows. I don’t know. I think women are continuing to make huge strides not only in athletics but in the business world, political world. I think there is still room to grow and to be heard. We’ve had female prime ministers before and other heads of state so it’s getting there.”

CY: What do you remember about it fifteen years ago from your programs to taking that podium?

KY: “There are moments that are pretty crystal clear still and you see snap card shots, postcard shots of certain things here and there and other parts are a blur. I think it will always just be some special memories and always remember stepping on the ice and skating off the ice and the medal ceremony and all that stuff.”

CY: Here you were around fellow Americans Nancy Kerrigan and Tonya Harding, so were you just surprised when the incident and all the controversy went down?

KY: “Yeah. I definitely think it was pretty shocking to the whole skating world and you know you felt for Nancy in the negative and positive of the whole thing. It was weird. It was just really a bizarre time in our sport and it was a time when a lot of attention was focused on the sport. That certainly brought about even more attention negative or positive. It was kind of – definitely an asterisk in the sport of figure skating.”

CY: Then we have Scott Hamilton who had his very open battle with cancer, which was something very touching and that we all took away from.

KY: “Yeah. It was a tough time. I think during those years we were so close in Stars on Ice family. It just affected all of us in a huge way. I think he made all of us stronger and just the way he handled it, fought it, came back the very next year, was just inhuman for us. He’s one of our heroes because I don’t know if any of us could imagine battling cancer, standing up to it, and living the life he has since then.”

CY: Many athletes have taken the opportunity to be on the dance floor. Would you ever consider doing Dancing with the Stars?

KY: “That’s funny. I am an avid watcher. I am a fan of the show. I think it’s great fun, clean entertainment. My kids love it. I don’t know. I am torn because I love dancing and I watch it and that be so fun to be able to dance like that and to learn how to dance like that, but on the other hand, I’ve spent my whole adolescence to adult life being judged by judges and being worried about live audiences and stuff like that makes me really nervous.”

CY:Is there anything else in entertainment you’d really love to do?

KY: “I don’t know. I love skating. I love the entertainment world. If there is something somewhere where I can blend the two in a different and unique way, I would love to try to do something like that. Being part of a tour like Stars on Ice, which combined top Olympic skaters in a venue where it is very theatrical was a dream for me. I was so lucky to have most of my professional skating career with them. Something is in that vain where I think where my passion lies I guess.”

CY: Finally, the Always Dream Foundation has been something you’ve been very passionate about over the last ten years and is used to inspire and embrace children’s dreams. Are organizations like yours even more critical today?

KY: “I think so, so much need out there. Just right out here in our own backyard. With the Always Dream Foundation, we focus on the organizations under the radar that don’t get a lot of attention. We are a very small foundation, small board, and we do what we can, but we want to make a difference with what we can do. I think that’s why we focus on some of the smaller organizations where we can really make a difference. That’s been a huge blessing and something I have gotten a lot of joy out of doing.”

You can watch Kristi Yamaguchi and Friends on November 25th on NBC nationally from 4:00 to 6:00 PM EST.

You can find out more about Kristi Yamaguchi and the Always Dream Foundation at www.alwaysdream.org.

2 Replies to “Kristi Yamaguchi: The Interview Before DWTS”