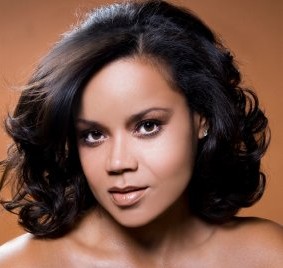 The year 2003, might be considered by some, to have been the beginning of the reality television boom. The second season of American Idol commenced, after season one attracted the interest of millions. A singing contest was once again cool. In all probability, however, many people cannot name the final four or five contestants from season two, aside from Ruben Studdard who won and Clay Aiken, who came in second.

For example, who came in third in season two of Idol? Stumped? The answer is Kimberley Locke. If you knew, congratulations! You are, probably, in the minority.

It is amazing to look back and realize it’s been eight and a half years since the Nashville, Tennessee native made it all the way to the final three, in year two of American Idol. What might be more poignant is that Ms. Locke has continued on a personal achievement journey. She’s now claiming a level of success that the majority of her Idol, and other reality TV colleagues, doubtfully see as she heads to daytime television this coming January 2012.

Listen to the entire interview with Kimberley Locke:

To start off this CYInterview with Kimberley, I wanted to know who she felt she was today. Ms. Locke was candid:

Ms. Locke started a Facebook voting campaign this week, for her next single. Fans have the chance to vote to determine which of three different songs will receive airplay. Music-wise, Kimberley has gone the independent route, with the formation of her own entertainment company, I Am Entertainment. She explains why she went independent:

“I think that a lot of times when songs are being selected, the artist sometimes doesn’t have that much say in what the first single is gonna be, let alone the fans. I think that in today’s world of social networking, engaging the fans is really important. The fans want to be engaged. They want to know more. They want to be more of the process because at the end of the day, they are the consumer…I think for me, going the independent route was the obvious next step for me…I wanted to have more creative control. I wanted to have more business control. I wanted to work with the people that I wanted to work with.”

Ms. Locke, who told me she has a ten year plan for her career, is obviously reaping dividends from her planning. January 2012 will bring some new daytime television programming to ABC. Kimberley’s slated to host The Revolution – the show’s working title – with Tim Gunn, of Project Runway fame. By setting goals for herself, she has secured one of the few daytime TV hosting spots out there. Kimberley gave CYInterview a preview of what The Revolution will be like:

“For me and in the grand scheme of my life, it’s amazing and it’s huge and it’s everything that I was hoping for…Watching our lives evolve, we’re all so connected. We’re all connected by some social medium…People are going to be able to watch our show and they’re gonna get a takeaway every day, something that’s gonna help them transform their lives and that’s what this show is about. It’s a health and lifestyle transformation. So whether you want to transform your family, your job or your bedroom or your weight, whatever you want to do to become a better you.”

Before reality television became part of media-over-consumption-culture, Ms. Locke gained celebrity from American Idol. What’s most inspiring, even rare, is that eight and a half years later, someone who used reality television as a platform for recognition is actually getting an opportunity afforded so few.

Ms. Locke’s locking up a daytime hosting gig, having achieved fame on reality television, is almost a fairy tale. Most people would’ve never expected anything like this from her, but she is soon to be famous to millions come 2012. And lest we forget, daytime television has helped skyrocket and expand the careers of show business talents like Rosie O’Donnell and Tyra Banks. This is definitely a big moment for Kimberley:

“I do feel like this is that moment for me. How did I end up here? Immediately after American Idol, I’m very goal oriented. So I have my short-term goals, my short-term goal was to get a record contract and get my music out there so people could remember me. Then my long-term goal was to actually host a television show. The past two years I have taken meeting after meeting after meeting, making the rounds to be seen in front of the people who could make that happen.

It just so happened that I got that phone call from ABC and they wanted to meet with me. It was one of those things where I obviously feel like I put it out there in the universe and the universe conspired and I had to do my part as well. But I put it out there and here eight and a half years later, I’m doing exactly what I’d set out to do on my 10 year goal. I think that it will change my life. I think it’ll change my career.”

In the instant fame/instant gratification culture we live in today, people might believe gaining some notoriety on reality television or becoming a trending topic on Google and Yahoo will lead to a successful, long term professional career. Yet, without meaningful action and real goals nothing will happen. The phone will not just ring off the hook. No one is making your career but you. Kimberley spoke about this:

“Nobody really knows how hard we work on a day to day basis except for us. And yes, just because people are out there talking about you and things are going on, it really doesn’t mean anything. People can talk about you all they want to, but if things aren’t materializing in the form of projects and those projects are coming to life, then it really doesn’t matter because they can easily start talking about the next person and what they’re doing…Just as much as I love being creative and performing, I always tell people, what turns me on is doing business.

I really do enjoy sitting down and being creative about the business in negotiating and making things come together and then making everybody who’s sitting at the table having these discussions feel like they are invested to the point that we’re all gonna benefit from this. It’s just not about my career.”

As many peaks and valleys an entertainer or celebrity’s career might have, some who are on top might never get back. Ms. Locke admits her career has been a slow progression, but it was the right pace for her:

“I’ve always said I would rather take 10 years to build the foundation for a 100 year career than be a flash in the pan…I completely understand why celebrities or sudo celebrities go off the deep end and lose focus and lose themselves…One day you’re on the top and the next day you’re in a valley. But just as fast as you went to that valley, you can go back on top again. That’s such an emotional rollercoaster, the spikes and the drops. I think I’m really excited that, it’s been a slow build for me, but it’s been the perfect pace as well because I feel grounded. I feel like I have a solid group of people around me now. I feel like I’m headed in a great direction where my feet are still plated on the ground.”

When it comes to the season two cast of American Idol, Ms. Locke says she keeps in touch with Ruben Studdard and Kimberley Caldwell. She also has contact with Diana DeGarmo, who wasn’t that season:

“Well, I always talk to Ruben. Ruben and I, we don’t talk every day, but we always stay connected and we always try to make sure we keep touch just to see what each other is doing and stay in touch. But probably, I see Kimberley Caldwell a lot. She was on my season. She’s always working out and about and it’s always fun running into her. But from my season, I think that’s about it…It’s not like we all stay in touch all the time. I do keep in touch with Diana DeGarmo, but she wasn’t on my season.”

In 2003, Kimberley and her American Idol cast members appeared on The Oprah Winfrey Show. With Oprah’s pending exit from daytime television this week, I asked Ms. Locke about her Oprah talk show memories:

“I can remember when we did her show, she actually brought her production team and her set to the American Idol set and filmed the show from the studio where American Idol was being filmed in. I just remembered being in awe of her because Oprah is from Nashville, Tennessee, which is where I’m from as well. So it made me feel really good to be sitting there looking at her, knowing that I can pull inspiration from that and believe in myself enough to know I could be in that position myself one day.”

With Ms. Locke headed for daytime, talk television and with Oprah gone, the challenge will be to fill a void left by Oprah. Ms. Locke just might be the Nashville native who leads the feel good, television world Ms. Winfrey has now left. I told Kimberley that I thought she will end up being one of the leading inspirational voices in TV’s future. Her response was heartfelt:

“I think I will be too and you know what, I think that it’s nice, this show hasn’t started airing yet and we’re in the beginning of the production phases, but just to hear you say that to me makes it that much more real to me. So you’re like the first person to say that I am becoming that person.”

You can vote for Kimberley Locke’s next single on her Facebook page clicking here.