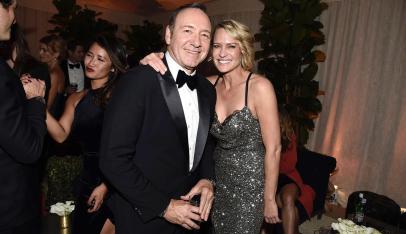 This past Sunday evening was the 68th Primetime Emmy Awards. Some of Hollywood’s biggest stars were there to honor the best that television has to offer. The cast of Netflix’s political drama House of Cards was on hand. The show was honored with nominations for Outstanding Drama, Lead Actor in a Drama and Lead Actress in a Drama, among others.

Kevin Spacey and Robin Wright, the stars of the popular show made appearances at the Netflix Emmy party at NeueHouse, in Los Angeles. See photo of them above. Known as President Frank Underwood and First Lady Claire Underwood, in the show, they make for a riveting political couple. Some of the events of the 2016 presidential election cycle have, at times, felt like a House of Cards storyline.

No doubt many are waiting for season five of the show, which will be available sometime in 2017.

Photo credit for this piece goes to Eric Charbonneau/Netflix.