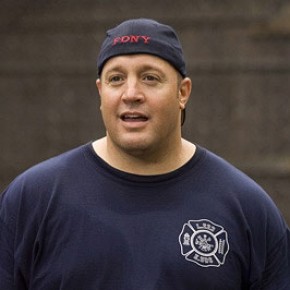 Kevin James said goodbye to his cast and viewers earlier this year after nine seasons on The King of Queens. The actor jumps back to the movie screen alongside Adam Sandler and Jessica Biel in I Now Pronounce You Chuck and Larry out July 20th. James notes he didn’t want to offend anybody with this movie and just hopes everyone will laugh at it.

Listen to the Kevin James CYInterview:

Chris Yandek: Did you really name your second daughter Shea after Shea Stadium, and if so, I think all male diehard sports fans want to know how they can convince their wife to name their next kid after something sports related?

Kevin James: “I honestly…honestly did. I have been a Mets fan my whole life and such good memories going to Shea Stadium. Her middle name is Joelle after my dad Joe who passed away. I brought it in because he used to take me to Shea all the time. I can’t believe this got by my wife. She ended up liking the name just for the name itself. I am excited and a little upset I am going to have to change it to City Park, her name, when they change the stadium over.”

CY: You co-star with Adam Sander and some are calling it Adam Sandler’s best comedy in years. What’s it like being married to this man for a movie?

KJ: “You know, it’s not too bad. He’s a good man. He’s a healthy man and he takes care of me, which I like that. We had a blast shooting the movie and it was one of the best times of my career I have had, just really an incredible time. We showed it to some audiences and they’re really loving it. I am excited about it. I can’t wait to get it out there.”

CY: There has been a lot of reaction and discussion from the gay community regarding the film. How should they feel about it?

KJ: “We screened it for GLAAD because we certainly didn’t want to offend anybody in any way. The main reason of this movie is really just to make people laugh and that’s all we wanted to do. When you pick a subject like this, you’re honestly gonna have to walk that line and you want to show what it’s like out there. These guys are idiots in a way. They learn tolerance, what it’s about, and what happens when they have to pretend to be this way. That’s basically it, but we’re certainly not trying to tell people how to live their lives in any way, shape, or form. We are just basically hoping people will go and laugh and have a good time with it without making light of the subject itself. We want to show about friendship, having a good time, and laughing.”

CY: Did you have any worries when you heard about this project and what it was gonna be about?

KJ: “I didn’t. The only problem was that we wanted to walk that line where we’re not just offending or making fun of somebody. We certainly don’t want to do it. I like making fun of myself and doing types of situations like that. That’s what I kind of think we bring across in the movie. We make fun of ourselves and what idiots we are. That’s the stuff that makes me laugh. If we’re just making fun of a group of people or other individuals it doesn’t work so well for me.”

CY: You’ve gotten the chance to work with great male actors, but lets look at the women you’ve worked with. In 2005 you worked alongside Eva Mendes in Hitch, which was her breakout year. Here now in 2007 you are working with one of this year’s breakout actresses in Jessica Biel in this movie. Is Jessica Biel where Eva Mendes was in 2005?

KJ: “They are very similar. Eva Mendes now is so hot and Jessica Biel is getting there with the same situations. They are very similar in that way, probably the most popular actresses working nowadays. They’re so locked up with a lot of films coming up and they are doing such great work now. We are just happy to have Jessica for her first real comedy because she was great. She just knocked it out of the park. She fit right in. I heard her say in interviews that she was nervous about it, but she really rocked it man. She did great. She was just a lot of fun. Besides her body, one of the guys just acting out.”

CY: In Hitch you play Albert who learned about the woman he liked in Alegra by reading the gossip columns and entertainment sections. How do you feel about the real life women featured in those publications like Lindsay Lohan, Paris Hilton, Nicole Richie, and even Britney Spears? It just doesn’t seem like we can stop talking about them.

KJ: “It gets crazy when that becomes the main focus of everything. I think it just kinda adds fire to it. It becomes more of a catalyst and driving these people to more and more problems. It gets difficult. It gets crazy. It really does.”

CY: But do you feel sorry for these individuals and what they put up with?

KJ: “I do in a way. I feel sorry for them if they are going through hard times and they just can’t deal with the pressures of the situations. I don’t know. It’s a tough situation for everybody. A lot of people say screw them. They want this. I don’t know. It just seems like they’re basically searching for something or trying to fill a void somehow. I don’t know. I wish them the best. That’s all.”

CY: I don’t think myself and many others when we look back at Hitch will ever forget the dance moves you put on with Will Smith.

KJ: “I apologize for that. That’s gonna be ingrained in a lot of people’s memories. That was the one thing I was asking Will for help with because I know he’s got rhythm. He can dance and he’s just a multi-talented actor, performer, athlete, and everything. He just stepped away from me. He wouldn’t help me at all.”

CY: Finally, The King of Queens ran nine seasons. I am sure you never thought it would last that as long as it did, so what was the hardest thing when it was over?

KJ: “Saying goodbye to my family there who I keep in my life still and will see from time to time, but it’s not on a daily basis. These are the people that really…really become your family. Along with your real family, you actually see them more. It’s tough to not work with somebody or see them every day after you’ve seen them constantly and hanged out with them all the time.”

I Now Pronounce You Chuck and Larry comes to movie theaters nationwide on July 20th. You can check out www.chuckandlarry.com for more information.