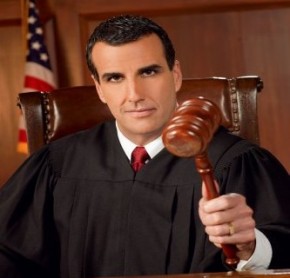 Now into his sixth season as a daytime judge, Alex Ferrer has brought his own style to the judicial TV circuit with Judge Alex. Seen in over 90 percent of U.S. markets, the former Miami cop, lawyer and circuit judge has learned a lot about himself from his daily television show.

“I’ve learned that I have incredible patience Chris. I’ve learned that I can tolerate all kinds of things that I never thought I’d be able to. Some of the things that people do to their family and friends is just, some of the things are outrageous. They have no problem coming on television and talking about it like it’s nothing. I had come from being a circuit judge in Miami where I handled all kinds of extremely serious and extremely tormenting cases with a lot of people suffering. So I pretty much thought I’d seen it all, but every day I go to work and I’m just surprised at what craziness people do.”

Judge Alex believes the role of a TV judge is to educate the viewers on the law. When preparing for cases featured on his show, Mr. Ferrer makes his rulings based on the state the filing came from. He says it takes a lot of research and preparation time and it’s one example of how his court TV show is different from others.

“One of the major roles is really to try to educate the public about the law and not every judge on television does that. That’s one of the things I’m proud of because I do my cases according to the law where the case originated. So I’ll tape eight to ten cases in one day and my first case will be New York law and the second case might be Florida and the third case might be Texas. So it’s an awful lot of work to get on the bench knowing what Texas law or California law is or New York law is case after case after case. But it’s worth it because I get to explain a lot of the litigants and to the viewers and people are fascinated by the law. Let’s face it, nobody out there, our viewers, our audience, most Americans in general do not learn about the law by hiring 300, 400 dollar an hour lawyers.

They learn it from myself and other TV judges who take the time to educate them on the law instead and unfortunately some of the other TV justices just kind of shoot from the hip and just do whatever they think is right, which is fine. But one, it doesn’t educate the viewers at all about the law. Two, I don’t think it’s that fair for the litigants because we bring the cases in from other states. If somebody filed their lawsuit in Tennessee, why should I just do whatever I think. I should be applying Tennessee law. So one of the things I think is a significant part of my role as a TV judge is to inform the public and educate them on the law at the same time as they’re being entertained, which is a great combination because they’re aren’t a lot of things in television that do that right now.”

Many of Judge Alex’s viewers have noticed his quick wit. He says it probably comes from his mother.

“I’d have to say my mother. She’s pretty quick witted. My son definitely got it from me. He’s pretty quick witted. I don’t know. I’ve always had a sense of humor from the time I was a young cop at the age of 19. In fact, when people ask me, what are your favorite cases? My favorite cases are the ones that make me laugh. I love to have humorous people in my courtroom. I love to have humorous cases, but I do have a variety…Every day is different. Every case is different. But that wit probably comes from mom I have to admit.”

In 2008, Alex was voted America’s Most Trustworthy Daytime Host of the year. The judge tells us he was also named the second most trustworthy person of all celebrities. He believes people can see he’s real and being himself. The recognition means a lot to him.

Back in February of this year, the judge had YouTube sensation Antoine Dodson on his show to discuss an incident when Dodson was bullied. This past weekend, Mr. Dodson was arrested for several misdemeanors with media reports noting possession of marijuana, failure to appear on a traffic ticket charge and failure to have automobile insurance. Days ago, Antoine pleaded not guilty to all charges. Alex weighs in on what he makes of Mr. Dodson’s recent legal troubles, given the fact he was just on Judge Alex a few months ago.

“I really liked Antoine when I met him. He’s a very personable nice guy. I obviously didn’t know him before this, but my limited involvement with him, my interest in him was he had had a very serious incident as a child when he was bullied. He was bullied from the time he was in second grade until the time he graduated high school. At one point, the bullying got so bad that he actually attacked the bully with a knife and stabbed him. That’s how bad it was. He was only 12 at that age. So it was very topical for the show we did.

I did hear about his legal problems. Obviously, am I disappointed? Well, no. He’s not my son. He’s not my family. He’s just another marijuana possession case among the hundreds and thousands every day. Do I wish he hadn’t gotten arrested for that or wasn’t doing drugs? Absolutely. Absolutely. I think that it is something that’s not gonna help him down the road, but depending on the severity of his involvement, if he’s gonna have subsequent incidents or if he has priors, it may not affect him much, a one time incident. So I wish him the best. He’s a nice man.”

Last week, Judge Stephanie Sautner ruled in California that Lindsay Lohan violated her probation and sentenced her to serve 120 days in jail along with 480 hours in community service working at the Downtown Woman’s Center near Skid Row and at the LA Country Morgue, both in Los Angeles. Judge Alex believes Sautner’s ruling was perfect and that it is, perhaps, the wake-up call Ms. Lohan needs.

“I think the ruling from the judge was perfect. I think she needs to have some serious jail time. Not a weekend in jail. I think she’s 120 days. If that doesn’t wake her up, then you know, we’ll probably not gonna see her wake up in our lifetime. But yeah, I do believe that is the kind of change she needs. I don’t believe when I see her on television this week going, ‘Oh now I get it. Now I’m a changed person. Absolutely. I’m on the right track now.’ No. You’re trying to avoid jail. You got 120 days and you’re hoping that some appeals judge is gonna look and go, ‘Oh, she says she’s a changed woman.’

You know how many times I’ve heard that from people over the years from crack heads and burglars who always tell you the time that they finally see the lights of the jury’s eyes or see they’re going into a jail cell, ‘Oh, this time I really, really mean it. I’m a changed person.’ It’s a bunch of garbage. She needs to do 120 days like the judge ordered, which I think was perfect and the community service so she can see the consequences of her type of actions that people do end up dead. It’s not all fun and games.

You’re not invisible because you’re young. I think all of that will do her a world of good. If it doesn’t, it’s still just punishment for her not abiding by the law. She was on probation. That’s the court saying to you I’m gonna give you a chance to prove to me this was an aberration and you don’t behave improperly normally and she violated it, which shows that was an opportunity wasted. She should get the jail time and do it.”

With Judge Judy recently suffering a health scare, Judge Alex weighs in on the event that affected his fellow television judge, causing Ms. Sheindlin to stop taping her show that day.

“I heard about it after the fact. I was traveling for work so I didn’t hear too much about it. I heard about it after the fact. I’ve met Judy only on one occasion as she was a very lovely lady, although I’m sure a lot of people say they don’t believe that since they see her on television. But then again, I like to think that I’m a nice guy, but you don’t want to be in front of me as a judge either. I wish her the best. I hope it’s nothing serious. I understand that it was just an isolated incident. Hopefully it will not cause her any further problems.”

Finally, there has never been a judge on ABC’s Dancing with the Stars as a celebrity dance contestant. Judge Alex is a longtime watcher and big fan of the show. He’d love to be a celebrity dancer because he enjoys doing new things. Hopefully someone at ABC will hear this CYInterview and know that there’s a TV judge out there who wants to be the first gavel pounder to hit the ballroom’s dance floor.

“I would totally consider doing it. Not because I think I’d be good at it. I would consider doing it for a couple of reasons. One is, I love doing new things, which is what got me to where I am now. I was a cop until I didn’t want to be a cop anymore. I wanted to try law and I was a lawyer until I wanted to try being a judge and when the opportunity came around to do TV, I said, ‘Sure. Why not. I’ll try that.’ So if they ever called me and if you know anybody that can put in the calls for me, I would definitely try it because it’s something new and different and who knows. I might be good at it some day.

But, the main reason I would do it is it’s great publicity. At the end of the day, I’ve got a TV show that airs nationwide in over 90 percent of the markets in the country and that’s a lot of viewers who might tune in to watch it number one and number two it be reaching out to another audience. So I think it be fun. I watch it all the time. I’ve watched it since season two. Unfortunately I missed season one. I was watching it last night and my wife and I sit there and watch it ever night. So I’m a big fan of the show. I’d love to be on it.”

Photo used for this piece is credited to Twentieth Television.

Judge Alex’s show airs nationally. You can find out when it airs in your market and find out more about the judge at http://www.judgealex.com.