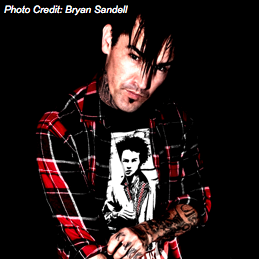 If you haven’t yet heard of CeeKay Jones, rest assured that many of the top names in music have.  He’s worked with, opened for and performed with the likes of Limp Bizkit, Agnostic Front, House of Pain, KRS-1 and Puddle of Mudd, to name a few.  He’s performed for crowds exceeding 10,000.

Since childhood, Jones’ influences have been the pioneers of Punk like The Sex Pistols and Bad Brains, the New York Punk scene and its influence on fashion, as well as mainstream music.  He originated the term “Gucci Punk” – which he labels himself – a name that sums up his own way of twisting and recreating iconic fashion and underground music.

Jones’ story takes CY Interview on a twisting turn, when we hear about his career as a professional snowboarder with Olympic dreams – we later learned about endorsement deals in his teen years with companies like Hurley, Solomon and Airwalk – and his excruciating halt in extreme sports when he blows out both of his knees.

He tells us that friends like Limp Bizkit’s John Otto, and others in the biz, may have fantasized about being involved in and/or competed in extreme sports like snowboarding and motocross.

He says, “Some are super-fans of sports…some came with a similar background [as me] but maybe didn’t see themselves at that level [in sports].”

What’s compelling is that Ceekay has found success in both.

We also learn that Ceekay Jones is a longtime friend of the now well-known Michelle “Bombshell” McGee.

Ceekay Jones on “Bombshell”:  “I definitely think she was painted in the wrong light. She’s a great girl, mother…very grounded.”

After taking a look at recent photos of the two, we ask Jones – on the record – the status of their relationship and he says McGee is a close friend.

Chris Yandek catches up with the “Gucci Punk” to talk about his life of music, extreme sports, fashion, his close friend, Michelle “Bombshell” McGee and his upcoming solo projects.