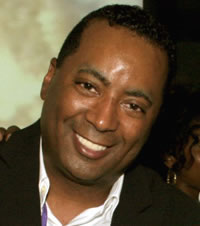 The search for the next big music group is taking place right now. However, it’s not on American Idol, America’s Got Talent or Making the Band. Worldwide auditions for this talent search are taking place, until January 28th, on the Internet. You can find more information at http://onthespot.cambio.com/ .

Listen to the entire CYInterview with Johnny Wright

Veteran music manager Johnny Wright is heading the search. Wright has managed musical acts including Britney Spears, NSYNC and the Jonas Brothers. Though he might be best known for putting together successful boy bands, now he’s looking for a group of guys and gals to form a group somewhat similar to the Black Eyed Peas. He is the driving force behind this new talent search. Those interested in the project will be able to log on to the website mentioned above and give their input on contestants. Wright says this is a great opportunity for aspiring solo artists to learn the music business but from a group standpoint.

“I’ll be with the group until it decides it doesn’t want to be a group again…When I bring them together physically, they won’t know each other. So they’ll have to learn each other’s personalities…Individuals that feel that they have the talent to be solo artists, really need to come together in a group first and understand how this business works before they can make that move. Justin Timberlake for instance, we’ve always known him to be a great solo singer, but it was the experiences and everything he learned by being a member of NSYNC that prepared him to be able to launch out to become that solo artist that he is today…When I really put it together and they present themselves to the world, it’s gonna be something that doesn’t fit in the normal box… It’s a talented character band, where the personalities that are in the band are gonna be different than anything we’ve seen before.”

Over the last decade, there have been music-talent contests on TV which have worked to put groups together. Best known are Pop Stars and Making the Band. However, the groups assembled didn’t enjoy longevity; they broke up. Wright says the reason this new project and the group he’ll put together can have long-term success is because the fans will be engaged in the creative aspects of the process.

“I think that because people get to see this online and the continuation after I pick the band all will stay online, I think that by the time I put this band together and go to launch it, the hopes are is that the world has already embraced it because they’ve seen it being done and they’ve also had a significant say so in what I put together in the music that we make and the process will continue to go through every step of the band online. So whereas, Making the Band TV show ends after 11 weeks and you don’t follow the process with the band anymore.”

Wright tells us he was with Britney Spears at the beginning of her career, right after her first hit – Hit Me Baby – was released. He talks about his working relationship with the pop star and what we should know about Ms. Spears that we don’t.

“I started with Britney when she was 15, just as she recorded Hit Me Baby. I put her as the opening act on the NSYNC tour. That’s really how our relationship started. She came through me with a good friend of mine Larry Rudolph. Then once she got on the NSYNC Tour, he was like, look, I need you to partner up with me on this and let’s do this. I just watched that whole situation grow into this just huge success. Now, just prior to everything going kind of to the left was when I no longer had an association with her. But one thing I love about her is she continues to put out great music and she has a dedicated fan base and people love her. She’s always going to make sure that when she steps in front of an audience, they’re fully entertained. The cool thing is she’s very creative and you don’t know what she’s gonna do next and that’s always exciting also.”

Many individuals within the music industry are wondering what the future holds for the business. Johnny has provided, perhaps, a good concept for how the industry can create numerous revenue streams from a project: a music act makes an album, cuts an endorsement/promotion deal with a large corporation and then exposes millions of people to their album via free downloads after buying the company’s product. If a person likes the album, then they could buy tickets to a live show of that act. Wright believes the day of just recording albums and putting out music are not financially feasible anymore. You have to be willing to do everything.

“I think that, and producers or writers will probably not want to hear me say this, but I think in the future, music is a giveaway. I don’t think that the potential to turn it into profit it the way it was and sell albums the way we did, is gonna be how the future of the music business works. That’s why more and more labels are actually trying to take more of a 360 participation in the artist so that they have a piece of everything. So for me, it’s kind of like going to a major [endorsement], let’s say Pepsi and say, ‘Look, we have this album, we have this artist. We want to give you this record. You guys got 20 million cans of Pepsi that are gonna go out around the world. Put a download code on it to all your faithful Pepsi drinkers and they’ll get to download the album for free.’

For that, now we have 20 million people that are exposed to the music, which means now if they like it, they’re gonna wanna buy tickets to see the group in concert. So that you can’t bootleg. So therefore that, if there is a merchandise factor to the artist because they have a great image, you’re gonna make money on that. Then on top of it, because you’re doing this kind of campaign with a sponsor like Pepsi, there’s going to be money in it for you for doing a campaign like that. So I see things like that happening. Artists have to become 360. They just can’t be artists that sing in a studio or make a record and put it out. If you’re not willing to go out on the road and do all the extra things, you’ll still be a successful musician. I just don’t know how financially successful you’ll be.”

One Reply to “Johnny Wright: What’s Right for Music, His Talent Search and Britney Spears”