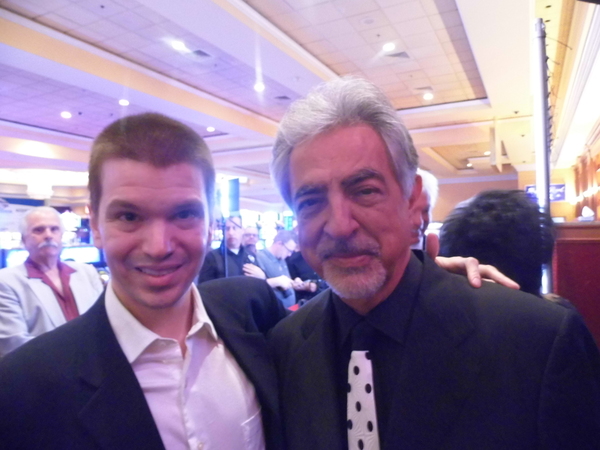 The ongoing joke at his celebrity roast this past Sunday evening was the following, “Who is Joe Mantegna?” To start, he is an actor of great acclaim. From roles in The Godfather 3 to playing detective David Rossi in the hit TV show Criminal Minds, to voicing the character of Fat Tony on the animated TV show The Simpsons, the Tony Award Winner has an acting portfolio of more than 200 movie and TV appearances.

On April 15th at the South Point Hotel and Casino, Joe’s show business peers including roast host Deana Martin [see our chat with her here], comedians Joe Piscopo and Tom Dreesen and actors Matthew Gray Gubler and Kristen Vangsness all related the narrative that Joe was too nice of a guy to be roasted. There is simply nothing bad to say about him. Joe is a man who has always showed up on time for work and has always been a professional, his peers said. On Sunday evening, he gave every fan a picture, who wanted one, a moment of his time, an autograph and a handshake. He even signed an autograph for someone during our CYInterview.

Actor Andy Garcia, who worked with Joe in The Godfather 3, sent a letter to Deana Martin, which she read to the audience, saying I do not know who Joe Mantegna is. And actor Dean Cain, who played Superman, recorded a video message he sent in where he pretended to confuse Joe Mantegna for NFL quarterback legend Joe Montana.

Before he was roasted, we spoke to Joe about if he ever thought he would be roasted by Dean Martin’s daughter. Back in 1998, the actor played Dean Martin in the TV movie The Rat Pack. He offered this, “I’m just happy to be, have the kind of career where somebody’s even thinking that I’m roast worthy. So I’m happy to follow in the great tradition of the Dean Martin celebrity roasts.”

To hear our entire chat with Joe where he talks about his role as Dean Martin, what a roast for Fat Tony from The Simpsons would be like and his role on Criminal Minds, you can listen to the entire CYInterview below:

3 Replies to “Joe Mantegna Roasted at South Point Hotel and Casino: Singer Deana Martin, Daughter of Dean Martin Presides, Throw Back Roast for one of Hollywood’s Nicest Guys a Hit”