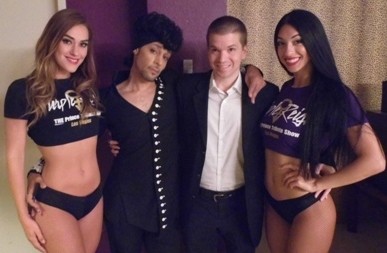 For his millions of fans, the death of multitalented music star Prince was a moment many did not expect. Prince passed away on April 21, 2016 at the age of 57. Musician Jason Tenner says he could not eat and barely slept for a few days after the Purple Rain singer’s passing. For over 15 years, Mr. Tenner has done his best to accurately represent Prince on stage. Now, he seeks to pay his respects to the now deceased artist, who so strongly impacted the music industry.

On and off the Las Vegas Strip, Mr. Tenner has performed his Prince show titled Purple Reign, for more than a decade. The show comprises Jason Tenner as Prince, his band and various beautiful women. It certainly makes for a memorable evening. The show has a variety of Prince’s music, a few short humorous skits and a tribute that pays respect to the artist, now gone too soon. On the evening of Wednesday, May 25th, I attended Mr. Tenner’s Purple Reign Prince tribute show, which is now at the Westgate Las Vegas Resort & Casino. The venue that evening was more than 95 percent full. Throughout the entire show, the performance received numerous standing ovations.

After the show, I spoke with Jason in his dressing room, about his journey performing as Prince and how the show has changed since Prince’s passing. He shares what it was like for him to meet the singer on a few occasions. See my picture with Jason above, dressed as Prince, accompanied by a few of the ladies of Purple Reign.

On when he knew that performing as a Prince impersonator could be a career, Jason Tenner said this:

“I didn’t really know a whole lot about Prince. I said that. I didn’t really know a lot about him. It was a Halloween costume, went out dressed up, already was doing 70s, 80s disco funk cover show called The Mothership Connection. We started adding Prince tunes to the set, people wanted to hear more, put on the Halloween costume from the previous year and it took over. So the platform shoes and the bellbottom pants and the big afro wigs were replaced by, you know, high heels and eye liner and up at around that time we came to the [Las Vegas] Strip in 2001 and was like, wow, this thing might have some legs and it’s fun to do. So we kept it up and since then I’ve turned into a major Prince fan.”

How has performing Purple Reign at Westgate Las Vegas changed for him since Prince has passed away?

“We have gone back because all of the music videos and everything that’s come out, we have gone back and refreshed on all the videos, refreshed on the music. We want to pay the truest tribute that we possibly can to him. So we have been studying and rehearsing and gearing the show back up. So that’s changed quite a bit just in terms of what we’re doing with the show, the mechanics of the show. …

Obviously since he’s passed, the attendance has increased quite a bit here at the show as well. You know, it’s a bitter thing, you know what I mean, for him to be gone and for us to be still attempting to pay tribute to him and make it real for people. People, including me, two to thee days, I couldn’t eat, barely could sleep, you know, really emotional, a lot of people feel that way. So I think it’s kinda what we do is cathartic I think for a lot of people still that are dealing with him being gone, you know, I feel good about it. I feel good about what we do. I feel like the way things have changed, it’s rallied us around to make sure that we’re really doing it right since he passed because it seems so important for his fans.”

What does Prince’s music mean to Jason as a long time impersonator?

Prince was known to be someone who was really protective of his music. On whether he ever had any issues performing any of the artist’s songs, Jason says he never had a problem. He also shares with us what it was like meeting Prince:

“I met Prince a couple times, sat with him in much smaller quarters than this and talked about very different type of things. Like I said, he’s a very spiritual, religious person, but no, I never received anything other than our YouTube channel was shut down at one point, everything was being pulled off of YouTube because of the lawsuit that he had with YouTube about collecting royalties and things like that and they were collecting revenues, so that stuff was all pulled off. Our YouTube channel did get shut down, but I don’t think that was a result of anyone from his camp going, ‘Hey, you know, get off that.’ It was just like all his videos were taken offline. And now, all of his videos are back online.”

Did Prince ever see the Purple Reign show in Las Vegas?

“I don’t think he ever saw us. I heard that he did, he snuck in, like I said, I’ve met him and sat and talked with him, but we never talked about me doing, I mean he knew, but it was never brought up, it was never part of the conversation.”

After a major star passes away, the discussion starts about who would play them in a movie. When it comes to Prince, Jason Tenner has been impersonating him for more than 15 years. Would he be open to playing Prince in a biopic?

“It depends. Maybe so. I think I could play Prince in a biopic. I mean, they’d have to get a lot of really tall actors because in these heels, I’m like 5’11. But absolutely I’d be open to something like that. It depends on what it was. I like to act. This is an acting gig, you know, when all this stuff comes off, I don’t even think I can talk like this anymore. But with it on, yeah, I would be.”

On why someone visiting Las Vegas should see the Prince tribute show Purple Reign at Westgate Las Vegas:

“I think we pay the truest and most energetically, I think and the musicianship I think we pay a really awesome tribute to Prince. I think it’s something that we do well and the fans like it quite a bit. So if you’re a Prince fan or if you’re just a live music fan, I think if you’re in Vegas, holler at your boys.”

Find the official site for the Purple Reign show at here.