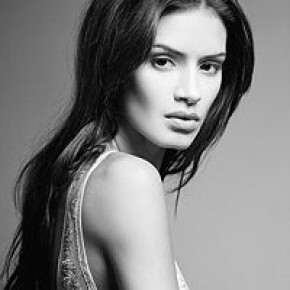 Jaslene Gonzalez’s confidence shines through. She always believed she would be America’s Next Top Model even through her personal struggles and seeking help. Being the first Latina winner of the show has its benefits with the growing Hispanic population, but it will be up to Jaslene to create her longevity in this fast moving entertainment industry.

Chris Yandek: What has life been like after this show?

Jaslene Gonzalez: “Living the top model life. Things are coming in left and right. I am living my dream at this moment and my life is definitely a whirlwind. Working so hard and enjoying this beautiful ride I have now.”

CY: I think you realize that you have been given this platform by winning America’s Next Top Model, but now it’s up to you to keep it going and build that portfolio.

JG: “Oh, no, of course, definitely. People think that this is it, but no this is just a stepping-stone for me. I have to establish myself and hustle for my work for what I want to do. This is definitely just the beginning. This is the starting point in my career and there is a lot more to do definitely.”

CY: So now Tyra Banks offers professional advice and support. What else does she do for you? I know she can only do so much for you, but now you have to go forward with it.

JG: “Just her mentoring me is enough. I see Tyra Banks like a mother figure when I was on that show and even now. Just knowing that she believes in me makes me believe in myself even more and the possibilities I have going for myself. Tyra Banks is an amazing person. I love her. I adore her. I appreciate everything that she has done for me. She won’t forget about me and she would always call to check on how I am doing and things like that. She’s definitely trying to help me follow the right direction.”

CY: What should the public know about her when the camera isn’t on?

CY: Many people will give up and try something else when they fail to accomplish a certain thing. What was it that made you come back and audition for season eight after not making the final group in season seven?

JG: “It starts out with confidence and believing in yourself, your dream, and that’s what I had. I was driven and determined that this is possible. This is something I want. I believe in it. That’s what gave me the drive. That’s what people gotta figure out nowadays. This is America and this is the land of opportunities. It’s about believing in yourself and believe in what you want because it will happen.”

CY: I think that’s a great attitude, but many people don’t see that for what it is. It really is up to you to make your opportunities happen. What is it inside you that says I can still make this happen? Most people would look the other way and say lets try something else.

JG: “Like I said, I believed in my dream. I believed in it. I believed this is gonna happen. I didn’t want to give up because I felt like I had too much potential to go to waste. I believed in my talent. I know they loved me. There was no problem with me the first time that I came down, but I came back more focused. I showed them this is something that I really…really want and I took it serious. It’s just my confidence. I am Latina, we have this swagger, and that’s how I carry myself.”

CY: Once you made the cast for season eight, what was your strategy going into this house with all these other girls?

JG: “My whole goal was to go in there and be as friendly as you want and as caring as you want because I am not going to change it, but still have the objective of winning. Trust me, I was strategizing since day one all the way through the end of the competition cause that’s all you can do. You needed to strategize. You needed to watch everything that is being said and being done. I think that’s what helped me get that far in this competition as well.”

JG: “Of course. It’s a huge advantage for me. That’s what I was telling Tyra. My reason for going on there was to be the first Latina to win America’s Next Top Model. Reason being that I knew I had America, but also Latin America backing me up. Those are two big markets. I think that what distinguishes me from all the winners. I think that’s amazing and definitely an advantage for me. Modeling is a passion of mine and I am willing to work as hard and trying to stay as long as I can in this industry. Having those two opportunities is amazing.”

CY: When most Americans think of Hispanic actresses, it’s Jennifer Lopez, Selma Hayek, or Penelope Cruz. Who did you look up to growing up?

JG: “I actually looked up to Jennifer Lopez, Selma Hayek, all of them. They are all strong women figures, icons, and they’re legendary. I wouldn’t mind following in their footsteps career wise because of how successful they have been. Even with CoverGirl, I have the privilege of following Queen Latifah and Tyra Banks first steps so to each its own. I could relate to Jennifer Lopez and Selma Hayek, but still I have a different focus. My career is going to be different. My lifestyle is going to be different. Just having that title as a Latina and that powerful status is a beautiful thing.”

CY: You are going to do your best to establish yourself as a model and a personality, but do you want to expand into any other forms of entertainment if you have a choice?

JG: “I would love to do that. I think it can come within time. I feel like I need to develop and continue to grow as a woman in this industry, become more of a businesswoman. Get a feel of what I want to do right now, which is modeling. We’ll see what happens in the future. Hopefully I would have opportunities in acting and that would be a great stepping-stone too in my career. We’ll see within time.”

CY: You have been very open and honest about everything that has happened to you. Many people have been affected by abuse in one way or another and for various reasons don’t seek help. How did you get to that moment that you needed to seek help and make a change for yourself?

JG: “When I auditioned for America’s Next Top Model in cycle seven, that was the reason why I didn’t make it in the house. They thought I was emotionally disturbed. I just said right then and there that I need to make a change in my life. That’s what I have choose to do.”

CY: Would you like to be a spokesperson for an organization to educate people that you really don’t have to put up with that abuse and those kind of things in today’s society?

JG: “Of course. I would be the first person there. The reason I talk about it is because I am not ashamed of it and who I am because of what I went through in life. I think all of us are because of the experiences we have come across. I would definitely like to speak about it and try to influence people and mentor people who’ve gone through situations like mine. I would definitely love that. I would love to do that.”

CY: You are in that early 20s group of women who get thrown into this entertainment industry and it can be crazy at certain points. What are your thoughts on what’s recently gone on with Lindsay Lohan and Paris Hilton’s personal troubles?

JG: “It’s nobody’s place to judge anybody’s life. I just feel like they are in the public eye. I don’t even want to talk about them or anything because it’s so different, their world and the way they live their life. I don’t know what they are going through in life. I don’t know what’s making them do the things they are doing now. I can’t sit here and judge them. I personally don’t agree with a lot of the things they are doing. As far as Lindsay Lohan, her actions I think right now are kind of pathetic, but I am no one to judge.”

CY: What does Jaslene Gonzalez want to represent to those young people that now look up to her?

JG: “I have always said just believe in yourself. I want people to see that I am a woman of courage, integrity, and excellence. I am definitely trying to showcase myself and I think that’s how I want people to like me.”Many people recently have said that you some resemblance of legendary model Janice Dickinson. What does that feel like?“It gives me great pleasure. It’s an honor for me. Some love her and some hate her. I love her.”

CY: Finally, what new projects are coming up for you?

JG: “I am doing right now my CoverGirl work. My Seventeen Magazine is out on stands right now. I shot the cover of Latina Magazine. I have a cover of Urban Latino now. I just got an endorsement with Southpole and many more. The list goes on.”