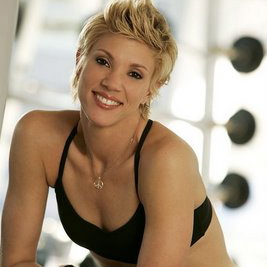 Whether you agree with Jackie Warner’s way of doing things or not, she stands behind everything she does. The openly gay fitness guru and trainer of the stars has been very successful of late with a hit show on Bravo titled Work Out that profiles her life, her gym in Beverly Hills, and the people who work around her. Warner also has a new DVD out titled Workout: One-on-One training with Jackie that is just in time for you to get your summer body, but she also came by to speak about all the controversy around her show recently.

Listen to the Jackie Warner CYInterview:

Chris Yandek: Who are you and what notable people have you worked with?

Jackie Warner: “Well, I don’t give my A list client list out. We have confidentiality agreements. A lot of people don’t understand that when you have A list clients, they don’t want to be connected to training sometimes or TV. Funny that. That is why I couldn’t pull them in on my show. I do have a Beverly Hills, California gym. I have about five businesses. I have a show on Bravo called Work Out and I have a lot going. I’ve got a lot of stuff going on. I have got the DVD that’s come out, so yeah.”

CY: Speaking of the DVD, Workout: One-on-One training with Jackie is available on DVD this week. How can someone benefit from these workouts?

JW: “Well, this is a very thorough workout and close attention is paid to form. It’s really about getting some basic movements and increasing the intensity as you go with weights, but we got a beginner, intermediate, and advanced version. We focus on core lower body and upper body and you can break it up into three segments so you can do it Monday, Wednesday, Friday, or a one-hour workout, which I suggest you do. You’re gonna feel sore. You’re gonna feel good. It’s manageable, but it’s pretty intense. You do each set for one minute solid. It’s kind of like repeating one minute for each exercise. I think it’s just a very accessible, well rounded workout.”

CY: What advice do you have for those Americans that want to lose the weight to get their swimsuit body for this summer?

JW: “People really have to start being a smarter consumer, read labels, and understand what hidden sugars are. Basically it’s about this, you go to the market, you read a label, if a meal has over 400 calories and nine grams of sugar you put it back on the shelf. If it has under you put it in your basket. It’s as simple as that. You have to cut out sugar for five days in a row to break that addiction and then you have decreased cravings. I study the science behind all this and the brain chemistry behind all this and we are absolute sugar addicts. It’s in all of our food products and we have to start looking at only two things and that is sugar and calories. Monday through Friday I clean up my diet and I don’t eat refined sugar whatsoever.”

CY: So what is your advice then for the part of America that is overweight and is even obese? Is there more drastic advice?

JW: ”I don’t see anything that is more drastic than cutting out sugar. Do you know how hard that is? Sugar releases the same chemical in your brain as free based as in injectable heroin, the exact same chemical. When I tell people that, they are like really? It’s harder to break that addiction. Lets talk about grazers. If you’re eating sugar throughout the day, you’re spiking your blood sugar level and you’re becoming a fat storing machine. Most Americans are skipping meals and when they do eat, they’re starving and they’re eating an excess of sugar and calories. Really it’s about eating breakfast, snack, lunch, snack, and dinner, and trying to feed yourself. The first sign is a hunger pain. When a hunger pain happens, that’s your bodies way of saying it’s too late, you’re a fat storing machine now. The key and all trainers know the secret is that you should always take portable snacks with you and try to feed yourself every couple of hours.”

CY: You are an openly gay woman in an industry full of testosterone. I can understand why you portray this tough, no nonsense attitude, on your hit show on Bravo, but do you ever feel you’ve gone over the line?

JW: “Yea. Everything I say and do. If anything is happening, especially this season, it’s about what other people are saying and how that is edited to sort of create a story that isn’t anything I’ve actually done or said that happens. Once you give yourself over to reality TV you are at the mercy of the producers period.”

CY: One of the recent episodes of Work Out shows a segment where some not so flattering comments were made toward a breast cancer survivor [Jamie Eason]. Your camp released a statement last week saying the offending remarks didn’t come from you, but a member of the staff. Eason also released a statement last week saying, “It saddens me that Jackie continues to blame the others around her.” What happened?

JW: “Well, what happened is something after shooting that a crew member and my office manager were talking in my office and they made a comment about this girl’s breasts being fake. It was not even that bad of a comment. This is Beverly Hills. How many fake boobs do we have here? It’s almost a non-issue. Unfortunately her boyfriend was sitting outside and came in and said, ‘That’s my girlfriend. She had breast cancer.’ Certainly my staff was mortified and apologized. I had nothing to apologize about cause I was not involved in making those comments. I was writing checks and doing paperwork in my office. It was rather annoying when one of my staff members who has a real issue with me and who I have a real issue with came in the next day and tried to set me up and wrote me into this situation. When I told him that I wasn’t going to discuss it on camera with him and to leave my office he refused so I fired him. I mean it was as simple as that. It was something that I wasn’t involved with.”

CY: Were you surprised sponsors pulled out after the episode and incident?

JW: “Well, one sponsor and surprised? Nothing surprises me in television. Not one thing. I thought it was a little too soon. I think it was an error because the show is really positive and increases in positivity each episode, but that’s a choice. If people can’t take the heat and can’t take the controversy then they shouldn’t be involved in advertising of reality TV because there is so much heat and controversy in reality TV.”

CY: What do you say to the critics from the gay community who say maybe you’re not the best role model or portraying that image?

JW: “I have never heard that before. I get so many emails and so much positivity from the gay and lesbian community.”

CY: Did a little research on that.

JW: “Well, if you go the Internet you’re going to find a lot of crazy things. You can’t be heroic to everybody. You can’t be positive to everybody. A lot of people want to focus on flaws and negativity, especially on the Internet because that’s their only voice. I don’t pay attention to that kind of stuff. I pay attention to opportunities coming my way, gays and lesbians telling me what I’ve done for them, organizations in my community that always want to work with me. That’s what I focus on. I don’t go on the Internet to a couple of crack jobs and care about what they say. I just can’t.”

CY: Finally, I’d give you the chance to clear this up then. Were you busted for a DUI in 2006?

You can catch Bravo’s Work Out every Tuesday at 10:00 PM EST and find more out about the show at the following link:

You can find more out about Jackie Warner at her official site: http://www.skysportspa.com/