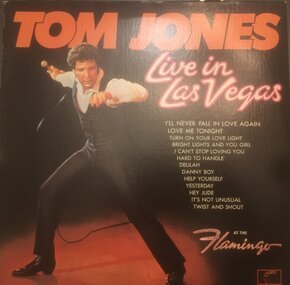 Many of the world’s biggest music stars have performed here in Las Vegas, at one time or another. Tom Jones has given a plethora of performances in Las Vegas, during a career spanning almost 50 years. In 1969, he released an album with a selection of live concert performances. It was titled Tom Jones Live in Las Vegas.

The album was recorded at the Flamingo Hotel and Casino. Listening to it on vinyl will make you feel like you are in the venue witnessing the legendary Welsh singer perform live. Tracks on the album include It’s Not Unusual and I Can’t Stop Loving You. There is much showmanship and fun in this excellent offering from Mr. Jones. It brings you as close to witnessing a live performance in Las Vegas, as a listening-only experience can.

Later this month, Tom Jones – who turns 81 in June – will be releasing a new album titled Surrounded by Time. Look for it starting April 23rd.

There are a handful of albums that can take a Las Vegas entertainment enthusiast back to an earlier time. Tom Jones Live in Las Vegas is one of those offerings. The vinyl can be purchased, on Ebay or Discogs, for a price of around $5 to $10 depending on its condition and seller of the album.