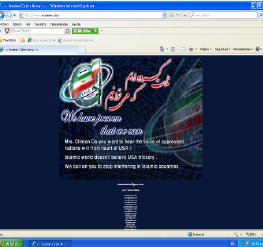 As of 8:00 PM EST, CYInterview.com has learned that Voice of America’s website, www.voanews.com, appears to have been hacked and continues to be unavailable to certain viewers outside of the United States.

CYInterview has attempted to access the site in the United States and it appears to be available. Are the Voice of America web servers, providing service outside of the U.S. under attack?

The screen shot below was taken outside of the U.S. as of 8:00 PM EST. It appears to contain a symbol with the Iranian flag with the letters Ir. CA beneath it. Those letters may stand for Iranian Cyber Army. The text on the screen appears to have a message directed to Secretary of State Hillary Clinton.

* Update: As of 10:30 AM EST on Thursday February 24th, we received the following statement via email from Kyle King of Voanews.com stating, ” Although the root problem was fixed Monday, we are told by our IT folks that some isolated users around the world may continue to experience problems for several days.”