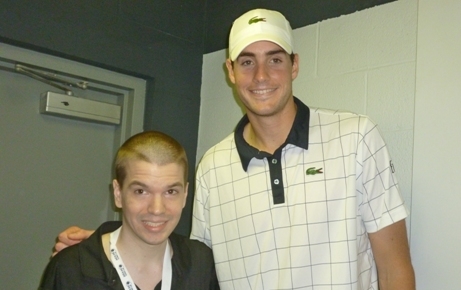 It was the South Florida sendoff for retiring American tennis star Andy Roddick. Competing in the exhibition Miami Tennis Cup tournament, he surprised fans Saturday evening by defeating reigning US Open Champion/Olympic gold medalist Andy Murray. As Roddick rode into the sunset, another player at the tournament exhibited his prowess. That player would be John Isner, currently the highest ranked men’s tennis player in America. At 6’9, Isner towers above the competition height wise and skill wise. At the time of this writing, he is ranked 14th in the world.

We spoke with John after his Miami Tennis Cup match, in the locker rooms at the Crandon Park Tennis Center. You can read the highlights or listen to the entire CYInterview below:

When it comes to playing in Miami, John says the city itself makes competing in South Florida enjoyable. He said the girls are what he likes most about South Beach:

“I love the atmosphere here in Miami. It’s not so much the actual playing, you know on the court. It’s the city, it’s the stuff that goes on when you’re not playing tennis. So it’s one of the best cities in the world and I really enjoy my time. … I hope I won’t get in trouble with my girlfriend, but I’m gonna say the girls.”

Speaking about his height, Isner says he understands someone with his build might not be common in the sport, but you are now seeing taller tennis players:

“It’s different. It’s something you don’t see all that often, but I think tennis is changing a little bit, whereas you are seeing taller players. So I’m definitely one of them and it’s sort of, it’s not uncommon anymore, but it’s definitely not common.”

On being the highest ranked American men’s tennis player in the world:

In 2010, Isner was the winner of the longest professional tennis match in history when he defeated Nicolas Mahut in the first round of the Wimbledon Championships. The match lasted 11 hours and 5 minutes. John reflects back on being part of history:

“It’s something that I’ll never forget for sure as a match that we won’t ever see again. So it was fun to a part of.”

The official site for Miami Tennis Cup is here.

You can check out John Isner’s official site here.