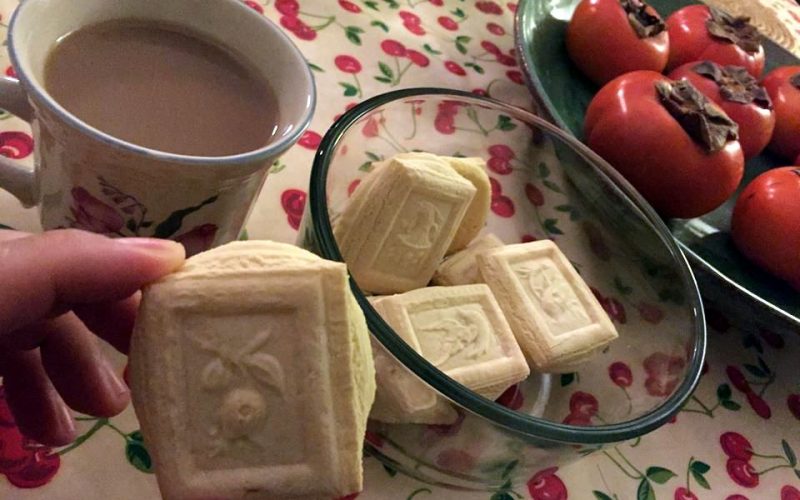 At Christmas time my mind invariably turns to springerles. Those pale, rectangular cookies– redolent with anise and embossed with charming floral and animal designs–never failed to grace the family tray of Christmas cookies. My search for the springerles of my youth has spanned almost 50 years.

Although I did not know it at the time, this cookie originated in southwest Germany, in what was then 15th century Swabia. This area was the origin of many of the settlers in my hometown in Pennsylvania. In the case of my own family, my great-great grandmother Dorothea came from Zwiebruchen, in the Black Forest, where–a German scholar once told me–they are famous for their cooking. My mother, however, usually got her springerles at bakeries where some of the clerks added up your purchases in German. The stores had names like “Sontheimer” and “Rusterholtz.”

When my children were born in Mexico, I was keen to perpetuate the customs of my own culture, so I brought with me a carved rolling pin and experimented with a recipe from the afamed Joy of Cooking. The results were dismal. Instead of producing the light texture and fragile top crust with a well-defined design, I got uniformly hard and blobby-looking rectangles. (I recently read that the name springerle means “little jumper,” referring perhaps to that pop-up top I was unable to achieve.) My husband nicknamed my leaden cookies “piedras” (stones), and cheerfully dunked them in his coffee, requesting that I make more, adding lime zest.

Years later, my search for springerles went on, sometimes aided by travel and internet. I traveled to Wisconsin to a place that has a strong German culture—so strong that St. Martin’s Day is a school holiday—and was disappointed to learn that no one there had ever heard of springerles. (“German” bakeries there, however, do sell Pan de Muerto!) The abundance of Lutheran churches was a tip-off that these descendants of northern Germans were not springerle lovers! Nonetheless, after this dead end, I localized– in the ever-more-abundant internet information on the subject– the cause of my failed cookies: the wrong leavening.

Bicarbonate of soda was simply the wrong rising agent for springerles! The traditional leavening agent was hartshorn powder (otherwise known as ammonium carbonate or baker’s ammonium). Further research revealed that traditionally, the source of hartshorn powder was the shavings of the antlers of a male deer (hart), or—more horrifyingly–derived from the hair or urine of a stag! For my good luck, synthetic baker’s ammonium is easily available in the Chaldean neighborhood of my elder daughter’s in-laws in Michigan, or in the Yemeni delicatessen across the street from my younger daughter in Oakland. (Oddly, the veiled girl there rings up my purchase in Spanish!)

My enthusiasm for springerles was recently re-ignited during a visit to a bakery called “Taste of Denmark.” There, a white woman and two smiling young men, one Latino and the other a black youth with a marvelous, spiky, hairdo dispense a broad range of baked goods to an equally diverse clientele: some clearly upper middle class, tapering off to a few customers who seem to be sheltering from the elements with a cookie and hot cup of coffee.

It was there that I found, 50 years later, the most incredible springerle cookies I had ever eaten. The designs are crisp and complicated, including elaborate 19th century images such as sailing ships and carriages. And they are soft and tasty! This, I was told, is because the leavening effects of hartshorn are undiminished by the 24 hour drying period that favors crisp images.

So finally I know the “why” and the “wherefore,” and my search for the perfect springerle has ended!

The photo for this piece was provided by Glen Jameson.