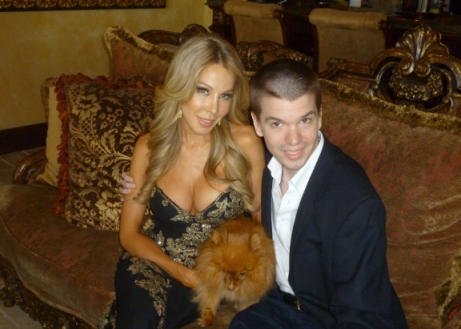 She’s Graced the Pages of Playboy; this Sexy, Charming, Beautiful Blonde from The Real Housewives of Miami Welcomes CYInterview into Her Home for a Candid Conversation: Dishes on Plastic Surgery, Her Husband Lenny, RHOM and More; Might a Spinoff Await Her?

I met her in her capacious home in Miami Beach. When I arrived at her door, she answered and led me in. She had yet to change into her eveningwear. Immediately, she impressed me as very pretty, very petite and very nice. She brought me into her living room, while she went upstairs and changed.

When she came walking down the stairs of her luxury residence, she had transformed from the pretty gal next store – the kind you cannot help but develop an immediate crush on – into a gulp-worthy, seriously beautiful woman of men’s dreams. Lisa Hochstein is beautiful, for real! She has a kind of latter-day Barbara Eden thing going on. Her beauty cannot be manufactured. Tweaked she will tell you, sure. But built from the ground up, no way!

Married to prominent Miami plastic surgeon Lenny Hochstein, Lisa, who has graced the pages of Playboy a well-deserved three times, is seeing her star rise thanks to her role on The Real Housewives of Miami. With likability as beguiling as her looks, the Canadian blonde is taking the reality TV world by storm. Perhaps a spinoff series, with her husband, is around the corner.

We spoke with Lisa, at her home, hours before she attended the 18th Annual Intercontinental Miami Make-A-Wish Foundation Ball. Later, when she arrived on the red carpet for the event, with Lenny, we continued our conversation.

In a dress both elegant and come hither, by designer Claudio Milano and styled by Yeren, Lisa spoke with me about a host of things: her personal challenge of quickly building a positive reputation among Bravo TV viewers, what she has and has not had done plastic surgery-wise, her beloved Lenny, what it’s like to be on RHOM and more.

As someone who is likeable and strives to live life without drama, Ms. Hochstein has become a voice of reason among her fellow Miami Housewives costars. Lisa Hochstein. She’s beautiful, sincere and fun.

You can learn more about Lisa Hochstein by reading the highlights or listening to the entire CYInterview below:

With a spot on a Bravo TV show, a marriage to a prominent plastic surgeon and a future home on Star Island, some might believe Lisa Hochstein is living the life of a princess, but Lisa says that’s not the case:

“I think my husband treats me like a princess and I think that’s an amazing compliment. So, sure if that’s what people want to say. I’m definitely not a princess though because I do things for myself. I don’t, you know have Daysy my housekeeper here every day. She comes twice a week, she does her thing. Obviously, this house is humongous. I need help with this house, but I do a lot for myself and my husband. I take care of him, I cook for him. It’s not just takeout all the time. So I have this takeout book that I call my cookbook. … Different takeout menus from all over South Beach. But I do cook for him once in a while. I have his favorite meatball dish that he loves and I’ll cook that once in a while. He has some favorite Russian dishes that I cook for him. His mother, of course, taught me those.”

As the second season of The Real Housewives of Miami progresses, people continue to say how nice and likeable Lisa comes off. The blonde beauty believes in the beginning, people judged her because of the plastic surgeries she had had:

“I think a lot of the viewers judged me in the beginning because you know I have the boobs out, I’m talking about the boobs, I’m talking about the plastic surgery. Because I’m married to a plastic surgeon doesn’t mean that I have this head to toe plastic surgery, which is completely false and people have this misconception about me. And I think once they’re getting to know me they realize I’m a real down to earth girl. Yeah I like to be glamorous and I like to put on this beautiful dress and the makeup and the hair for special events, but there’s days where I’m just like, I’m in my sweatpants and my hair in a ponytail and I’m just like the girl next door, like someone’s best friend or sister or cousin.”

Though Lisa and husband Lenny Hochstein have become one of Miami’s most prominent couples, the model/actress, hailing from Canada, never thought she would be part of the South Florida scene. She talks about her life growing up and what she was doing before she took a chance on love with Lenny:

“I grew up in Toronto, Canada and Canada is the most beautiful, where I grew up is beautiful and amazing and I love the different seasons because that’s something we don’t have in Miami. I have a wonderful mother who did everything for me and my brother growing up and I was very blessed to have such an amazing family. And of course I always knew I was gonna move to the states. I did a lot of modeling. I did acting. I did some major national commercials in Canada. I did TV shows. I did some feature films. I was in the pageant circuit. I really excelled in the pageant circuit.

I was really into fitness. I did tons of fitness modeling and I decided that it wasn’t, Canada, the opportunities are a little bit limited when it comes to my career goals. So I wanted to go to L.A., the West Coast because that’s where everything is. And, of course, once I did get my papers to be legal and work in the states, I met my husband shortly after that. So I rerouted to Miami. I never thought in my entire life I would live in Miami, but you know sometimes life throws you curve balls and you have to kind of go with it and I took a chance on love.”

On The Real Housewives of Miami, Lisa Hochstein and fellow co-star Lea Black are two women who stay above the drama and don’t interject themselves in the other Housewives’ business. Lisa explains why she stays above the fray:

“I think it’s very accurate of who I am. I don’t believe in engaging in other people’s issues and problems. When it’s about me, oh believe me I can be your worst enemy if someone’s going to attack me. But you know, no one’s really attacked me and the girls have their own issues and I’m like Switzerland. I like to be neutral. … I feel like I’m the kind of personality where I kind of help men’s situations. And I think this group of women needs a person like me otherwise all hell would break loose all the time.”

Though Lisa was hesitant to talk about her fertility issues, when signing up for The Real Housewives of Miami, she realized those types of personal things usually come out. She and Lenny are continuing to try and start a family:

“I was definitely hesitant to speak about, of course, my issues with fertility. But, of course, the timing came at the time where me and my husband are really trying to start a family. And when you sign up for these shows, you let the world into your life. So you can’t really hide too much. You know there’s things, of course, you can keep a secret and you don’t have to tell everything to the world, but this I think is an important part of my life and I think that a lot of other women are going through the same thing and I feel that I’ve had such a outpour from the fans messaging me on Twitter, on Facebook, email and sharing their story with me and they’re trying to give me all the support they can and they’re giving me ideas of what I can do to help start my family. I found that very, it’s special, it’s a special thing to be able to touch other people.”

Being married to a plastic surgeon has given Lisa particular insight into the world of aesthetic change via surgery. Her advice to women is this:

There are already discussions about whether Lisa and Lenny could get their own spinoff series in the future. The plastic surgeon and model/actress share a great dynamic. They are two extraordinary people who are very down to earth. Lisa would love a spinoff show:

“I would love that. That would be amazing. I think that, I would love people to see more of me and my husband because I think that our dynamic is really crazy and funny and we have such a great relationship and our friends seem to be entertained by us all the time. … Our friends are always like, ‘Oh my God, I could watch you guys all day long.’ So I mean, I think that they’re could’ve been more Lenny and I interacting and maybe on next season you’ll see that or maybe on our spinoff. Who knows.”

Setting the record straight on what plastic surgeries she has had, Ms. Hochstein says this:

“Yes. I would like everyone to know that I’m not head to toe plastic surgery. All I’ve had done was a rhinoplasty and a breast enlargement. So when people say these nasty things like, ‘Oh my God, she’s plastic. She’s had everything done head to toe.’ They really don’t understand that you can be born good looking. Just because I’m married to a plastic surgeon doesn’t mean I’m using all of his services and I’m in there every two seconds, because my husband doesn’t believe in unnecessary plastic surgery. Like if he looks at somebody and they completely don’t need that surgery, he’ll be like, ‘I’m sorry. I don’t think it’s a good idea to operate on you.’ And it’s no different with his wife. Just because I’m his wife doesn’t mean I’m going in there on a daily basis and getting nips and tucks.”

5 Replies to “I Dream of Lisa Hochstein (or is that Hotstein?)”