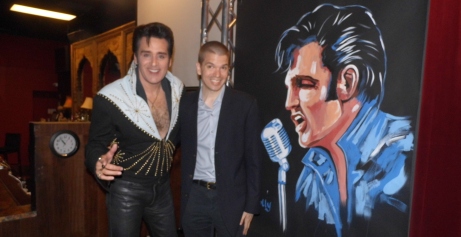 Elvis Presley will always be known to the world as The King of Rock ‘n’ Roll. Few entertainers will ever reach his level of notoriety and accomplishment. Then there are the Elvis impersonators. Steve Connolly is arguably the most celebrated Elvis impersonator in the country. He has received numerous accolades and opportunities owing to his portrayal of the King, both in Las Vegas and across the country. See our photo with him above with an Elvis portrait he painted.

As the only Elvis entertainer to ever have a show running daily in a Las Vegas Strip Casino, at Bally’s Las Vegas, and endorsements from the likes of former President Bill Clinton, Aerosmith front man Steven Tyler, current presidential candidate Donald Trump and even Elvis Presley’s conductor Bobby Morris, Mr. Connolly’s show, titled Spirit of the King, really does bring Elvis back to life. The show is currently at the Four Queens Hotel located in downtown Las Vegas, on Freemont Street. With over 5000 performances impersonating the King of Rock ‘n’ Roll, Mr. Connolly’s appearance, vocal range and impressions of Elvis are spot on. If you are not an Elvis fan before seeing his show, you will be one after.

After seeing his non-stop, highly entertaining show last month, we spoke at length with Steve Connolly, about some of the highlights of his career impersonating Elvis. You can read the highlights and listen to the entire CYInterview below:

Steve Connolly says the Elvis inspiration originally came from his mother. She was a diehard Elvis fan. On when he knew there was some value to being an Elvis impersonator, he shares this story with us:

“I did a solo gig and this was kind of an earth changing moment. You know, I use to play these open mic nights and you’d be in a band and we’re all young guys, and so I did this gig where I sat with my acoustic guitar and started playing original songs, but it was St. Patrick’s Day. The place was packed, shoulder to shoulder, just drinking, everybody going crazy and I am playing like my ballad original song and I’m going nowhere right? And the producer guy said I needed a segue while we change acts. ‘Can you sit there with your acoustic guitar and play some tunes for 15 minutes?’ So when I agreed to it, I didn’t realize I would be with this drunken, insane crowd.

So I didn’t have the crowd so I switched and did Heartbreak Hotel and the crowd shut up and started going nuts and then I did Blue Suede Shoes. So I scrapped my originals and I went with two Elvis songs and I won over the crowd and got a lot of great accolades at that time from all the other bands. It was a great moment. So that was one of those times where I realized that Elvis works. It didn’t matter what environment.”

The act as Elvis has given him a chance to spend time with many of the world’s best musical acts. One story stands out, involving Steven Tyler of Aerosmith who said that Mr. Connolly was the best Elvis he ever saw.

“When Steve Tyler, I had been at the MGM, I’ve probably done maybe 1500 performances at the MGM at the time when I met Steve Tyler and he came up to me after the show and he grabbed me, he’s about your size and started squeezing my shoulders and this is after the show, big huge crowd, the first guy in line to tell me, ‘cause I use to do a meet and greet like you saw here right and he’s going, ‘That was great man. I cut my teeth on Elvis. Man, you were amazing.’ And I’m looking at him and I’m going, ‘You’re Steve Tyler.’ I paid to see Steve Tyler 17 times. Before this moment, I hitchhiked to see Steve Tyler twice. What am I saying? Twice? I probably hitchhiked six times to see Aerosmith.

Aerosmith’s like the greatest thing on earth to me. Now I have Steven Tyler telling me I’m great. So I said to him, ‘Is it possible that ‘cause there’s a big line and people are huffing and puffing because they want to take a picture with me and he’s taking up the time.’ You just witnessed some of it, but this was MGM so it was a lot bigger. And I said, ‘You know, I got a throwaway camera on stage. Is there any way I could, I’ll run on stage now, grab the camera and we take a quick picture?’ And he said, ‘Oh, no, no, no. You sign these autographs, you take care of these people and I’ll just wait right here. I’ll just step back and I’ll wait right here.’

And I said, ‘Are you kidding me? Seriously I don’t want to hold you up.’ And he said, ‘No, no, no. No. This is cool. I want to watch you do this.’ So he steps back over and I sign about 25, 30 autographs as quick as possible. You saw me out here. I take time with everybody, but this day I was like Steve Connolly, Steve Connolly and then I ended up going over and talking to him for over an hour about all kinds of stuff. Aerosmith owned a club in Boston called Mamma Kin, which was one of my first big Elvis gigs and we sold it out. It was very frightening too because the club owner said Elvis wouldn’t go over. …

But the Steve Tyler one, to answer your question, was monumental as a kid who grew up, my big reason I am doing what I am doing is ‘cause I’m Aerosmith, Kiss, going to see these guys live and to think that’s what I want to do.’ And they’re the people that made me say, ‘If I can do anything, that’s what I want to do’ and then to have that guy come up to you and tell you you’re doing a great job. And quote this, he said, ‘I cut my teeth on Elvis.’ And that’s not something everybody says. So it stuck in my head.”

“The Donald Trump one was huge too because he said, ‘I don’t like Elvis impersonators.’ Bill Clinton recommended me to Donald Trump. That’s how I got that gig you know. And he said, ‘If it wasn’t for Bill Clinton.’ And I said I know, ‘I saw you on Larry King and you said, ‘If life were fair, Elvis would be alive and all the impersonators would be dead.’ And he laughed and he said. ‘Oh you saw that? You changed my mind.’ Just all these accolades, now I did have a great gig when I played for Donald Trump, $100,000 sound system, 27 piece orchestra. It really was, even when I was playing, I was going, ‘Well, this sounds good.’ Every note I was singing was coming through.”

Aside from those great moments, the biggest for Steve may very well be performing for former President Bill Clinton. He shares his story about the former Commander-in-Chief:

“The other thing that moved me the most was Bill Clinton. That one, I went home and wrote it all down. A lot of other things, stories made little notes, but I wrote an essay on the time I met Bill Clinton ‘cause it was crazy. I did a gig. It was for his stepfather. His birthday party and you know, I’m looking out at the crowd and I go, ‘This is Bill Clinton. It’s the president.’ … You’re performing and you know, the President is watching me perform. And then after the set, he came up to me and he said, you know, he put his arm around me, he’s about 6’3, 6’4 and Hank Cartwright who was the host of the party, he said [Clinton], ‘I just love Elvis. I love Elvis. Is there any way I could get you to back on stage and do another set?’ And I looked at him and said, ‘Yes sir! Mr. President.’ He’s got his arm around me and he’s asking me will I go back on stage? What would you say? ‘Yes sir!’ And there’s all these secret service guys around. …

I could spend two hours on Bill Clinton. But the, so I did. I go back on stage. After I got off stage, Bill Clinton came over to me, it was a very intimate, maybe 75 people and we talked for about 15 minutes about music and he talked about, when I played the saxophone he used to try to figure out all the harmony parts that The Jordanaires sang. They would be playing sevenths and ninths and I would be playing, I would make sure I worked out each harmony. He was really into Elvis music and he said, ‘The harmonies you did, the vocals, everything was perfect.’ He was, couldn’t be more complimentary. And of course at that same event I’m dancing on tables, I’m leaping around, I’m trying to avoid getting hit by a ceiling fans and he talked about all the craziness too, you know.

So the interesting thing with Bill Clinton, the conversation was very musical. We talked about Frank Sinatra. It was like talking to another musician about what it is that we do and the fact that you have to negotiate the crowd and still hit the right notes. But the Bill Clinton one actually, I went home, I did a letter, I sent a letter to Bill and I got back two autographed 8 x 10 pictures too and even a note that he will keep that letter and it really meant a lot to him ‘cause I sent a letter to my mother that I met the president and then I sent a copy of that letter I sent to my mother to him and that got me, it’s a series of people how it ended up getting back to me. So it was great.”

Finally, on what performing hundreds of times a year as Elvis means to him, Mr. Connolly says this:

“If I can bring joy and happiness into people’s lives one song at a time, you know, that is, and do what I do, I was in the second grade, I’m at a Catholic school looking out the window daydreaming, it was raining and a nun came over and said, ‘Mr. Connolly, Mr. Connolly, are you paying attention?’ And she asked me that question, I answered the question correctly, which is to good to know. But then she said, ‘No. I thought you were daydreaming. You know what you want to be when you grow up?’ ‘Well, I’m either gonna be an actor, a musician or an artist. Right?’ And I don’t really need to worry about whatever that was. I think it was geography actually. You know, I’ll always know wherever I am. Why do I need to know geography? I just have to know where I am. So in the second grade I made a definitive declaration that this is what I’m gonna do. So Elvis gives me the opportunity.”

You can find all upcoming dates for Spirit of the King at the Four Queens Hotel in Las Vegas and purchase tickets clicking here.

For more information on Steve Connolly, you can check out his official website clicking here